Last Wednesday I walked from my apartment in upscale Nápoles to a very different neighborhood, Tacubaya.  At one time Tacubaya was a rural suburb of Mexico City, and the wealthy built country estates here.  As Mexico City grew Tacubaya was absorbed into the urban sprawl and deteriorated into a poor neighborhood.  One of the city's worst shantytowns "La Ciudad Perdida" (The Lost City) is in Tacubaya, but, needless to say, I did not venture into that part of the district.  In spite of the urban decay, I did not feel unsafe... at least not in broad daylight on the busy streets.  However, I am not sure that I would want to venture there at night.  Several major thoroughfares and bus lines converge here, and trying to cross the clogged streets seemed the greatest danger.

As I entered Tacubaya, my first stop was the former convent of Santo Domingo, today the parish church of La Candelaria.  It was built in 1590 and is the only 16th century Dominican church remaining in the city. 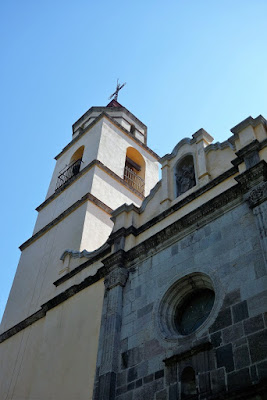 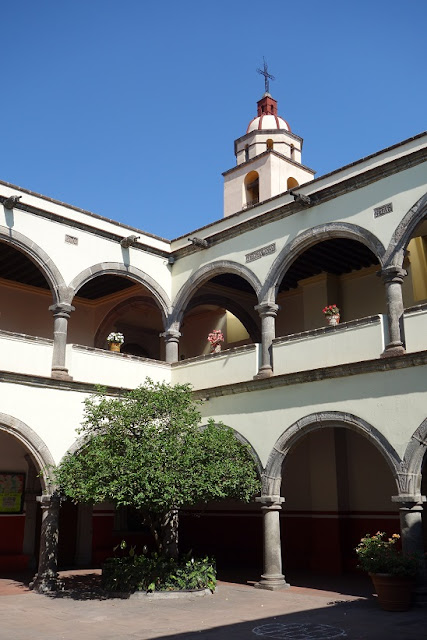 The simple interior of the church 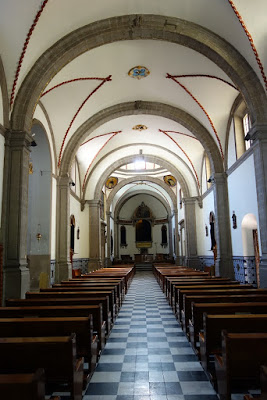 During Holy Week, many churches cover all the images of saints with purple shrouds. 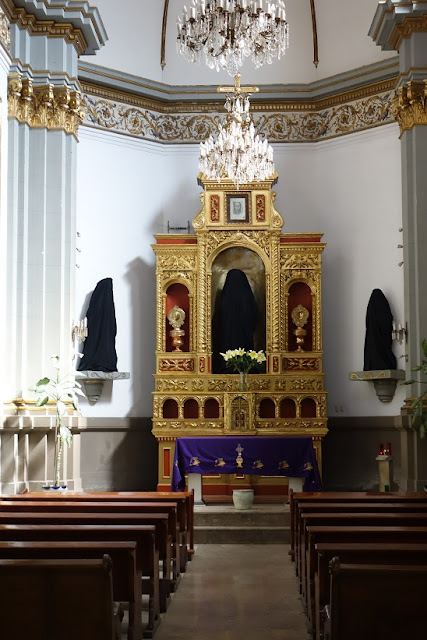 From the church I walked several blocks north along Avenida Revolución to where it joins Avenida Jalisco forming a triangle.  Here stands one of the earliest examples are art deco architecture in the city, the Ermita Building. 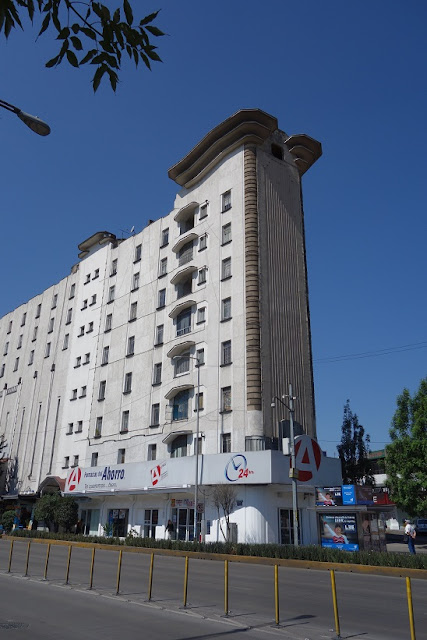 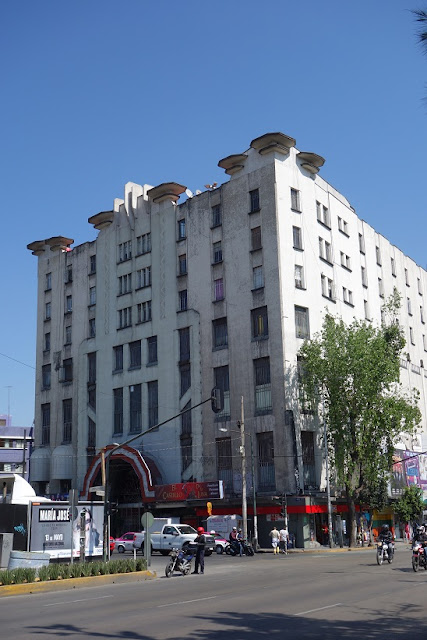 This wedge-shaped building was quite daring and controversial for its day.  When this eight story structure was completed in 1931 it was one of the tallest buildings in the city.  Today, like the rest of the neighborhood, it is rather run-down, but you can imagine what an impression it must have made when it was first built.

A few blocks from the Ermita Building is the neighborhood's main green space, Lira Park.  The park is what remains of a large estate that belonged to an 18th century aristocrat.  A portion of the property was later purchased by Vicente Lira, a wealthy industrialist.  It was he who had elaborate gardens designed.  Eventually the land became a public park.  It has seen better days, but remains a pleasant retreat from the gritty neighborhood.

The main entrance is through an archway designed by a Italian architect. 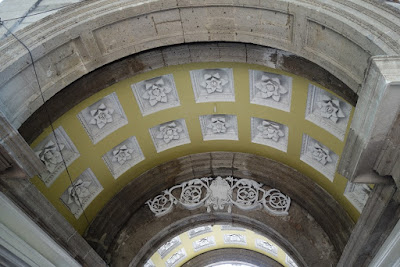 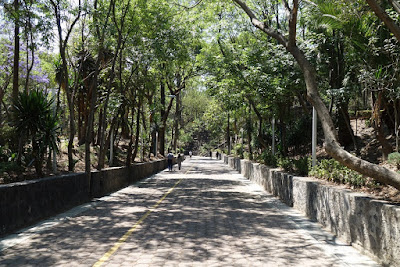 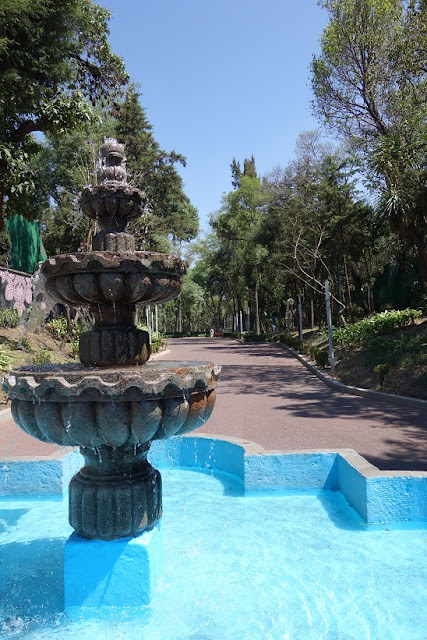 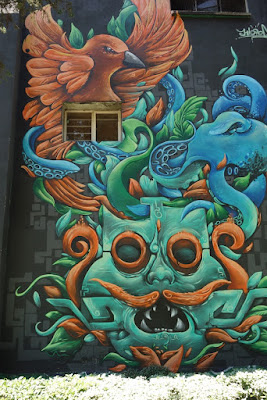 My main reason for venturing to Tacubaya was to see yet another one of Mexico City's many museums.  Tucked away on a little piece of land between major avenues and an elevated beltway is the National Museum of Cartography.

The museum is housed in what was once the 18th century Church of San Diego. 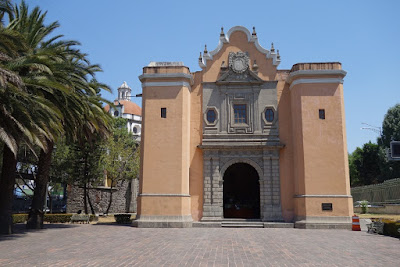 From this photograph, you would never guess that this pretty, colonial gem is surrounded by a tangle of thoroughfares.  To reach the museum you have to go through a pedestrian underpass beneath the entrance ramp to the beltway.

The museum houses a collection of historic maps of Mexico.  (Actually most of the maps are copies of the originals.) 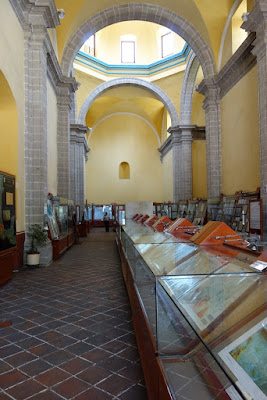 Admission is free, and, not surprisingly, there were very few visitors at this obscure little museum.  When I signed the guest book I did not see the signatures of any other gringos on the page. 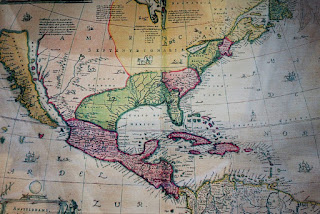 A map from the 17th century showing the European colonial holdings in North America. 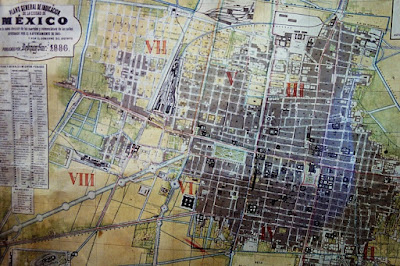 A map of Mexico City in 1886
Notice the diagonal road in the lower left hand corner (under the Roman numeral VIII).  That is the Paseo de la Reforma, one of the city's major boulevards.  Back then it passed through largely undeveloped land on the city's outskirts.  Now the Paseo is lined with skyscrapers.

Is the Museum of Cartography worth a visit?  Even though I am very interested in maps, I would have to say "no".  But it did give me an excuse to wander through a neighborhood rarely visited by tourists.