On Saturday after we saw the art exhibit at the Palace of Fine Arts, we had a late afternoon dinner.  Our favorite restaurant downtown is El Cardenal, a landmark which has been specializing in traditional Mexican cuisine since 1969.  El Cardenal now has several branches throughout the city.  We usually go to the flagship restaurant which is located just a block away from the Cathedral, but there is another one close to the Palace of Fine Arts on the Plaza Tolsá.

We arrived at just the right time.  We did not have to wait for a table, but soon people were waiting.  We started with soup.  Alejandro had a kind of chicken soup, "Caldo de Gallina" (Hen's Broth), and I had the traditional "Sopa de Tortilla".  My tortilla soup was one of the best I have had anywhere. 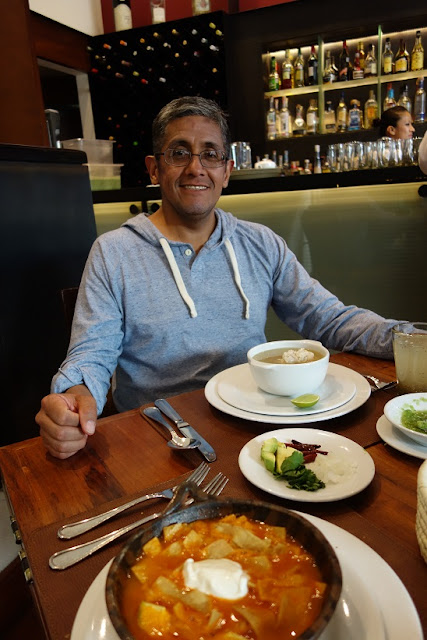 You can see the huge chunk of chicken breast in Alejandro's soup, and the plate of garnishes which included avocado, chile peppers, and chopped onion.  As a beverage we ordered a pitcher of "agua fresca de chía y limón", a refreshing drink of lime with "chía" seeds.  (Yes, that's the same kind of seed that we know in the U.S. from "Chia Pets".)  And look how thick and yummy my tortilla soup is!

For our main course, Alejandro had "chuletón" (T-bone steak) with "enchiladas potosinas".  I had chicken breast stuffed with spinach and covered with a goat cheese sauce. 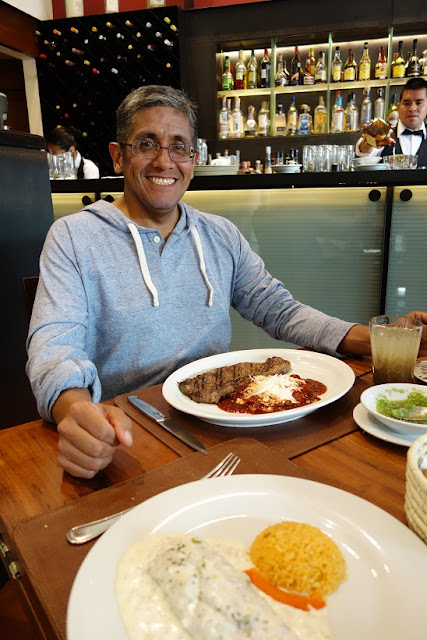 Our meals were delicious.  It is nice to know that this branch of El Cardenal is just as good as the main restaurant.