Part of getting to know a new neighborhood is trying out the restaurants in the area.  Colonia Nápoles, the neighborhood where I am currently staying, cannot compare to the culinary hotspots of the Condesa or Roma districts where I stayed on previous trips.  However, Nápoles is certainly not lacking in places to eat, and I lucked out on my first full day here.

On Wednesday I was looking for a place to have lunch.  Just a short distance from my apartment I came across a restaurant located in what appeared to have once been a colonial-style home. 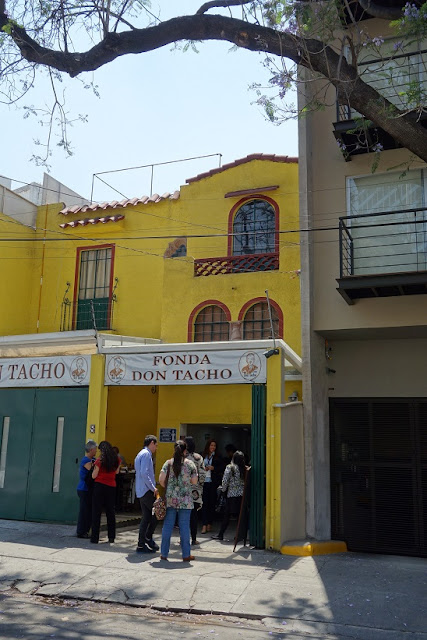 The place was called "Fonda Don Tacho", and it was quite busy... a good sign.  I went inside and took a seat at the last empty table.  The waitress asked if I would mind sharing the table, and I was joined by an attractive and very charming older lady.

We had a delightful conversation which added to the enjoyment of lunch.  When she found out that I was from the United States, she asked me what I liked about Mexico, and what were the most interesting things in my home state.  We even discussed last year's presidential election, and I explained how the Electoral College works.

So, how was the food?  Like many small restaurants, "Fonda Don Tacho" is open only in the afternoon and offers an inexpensive, set menu catering to people on their lunch break.  These set menus generally have three courses...  a soup, followed by a rice or pasta dish, and then the main course. 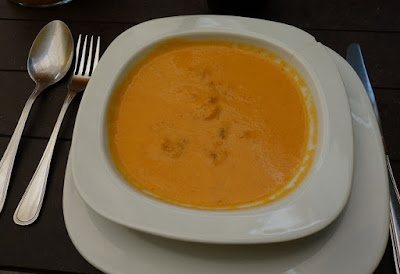 For my second course I had Mexican rice with a fried egg on top.  For the main course, I had "enmoladas", chicken enchiladas covered with "mole".  Although the "mole" wasn't the greatest that I have had (perhaps a tad too sweet), it was still very tasty. 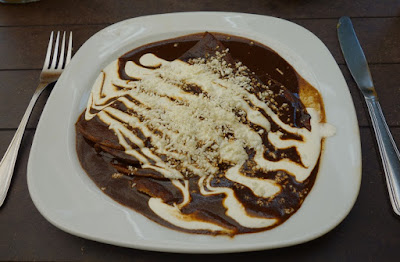 For a whopping price of 70 pesos ($3.50), it was a very satisfying lunch, and I will most definitely return.

On Thursday I tried out another place called "La Cocina de Abby" (Abby's Kitchen).  According to the sign it specializes in dishes from the city of Tampico.  However, the set menu for the day was all pretty standard fare. 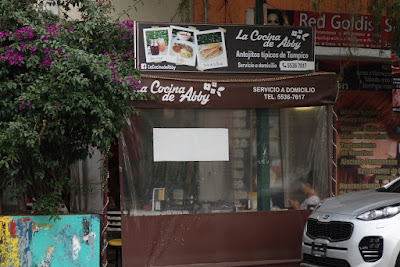 For the first course I had "sopa Azteca", a variation on tortilla soup.  It was OK although the chicken stock was not very rich.  The predominant flavor was "picante" from the chile peppers floating in the soup. 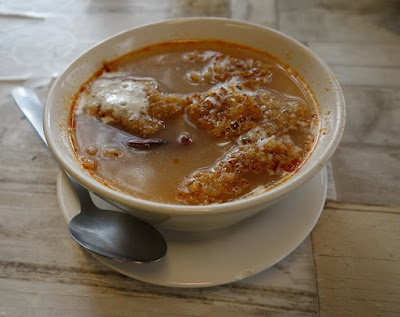 Next I had a small plate of spaghetti, coated in what tasted like watered-down mayonnaise and garnished with some pieces of ham.

For the main course I had "enchiladas suizas"... they are called "Swiss" because of the cheese melted on top.  Again, they were OK, but nothing spectacular. 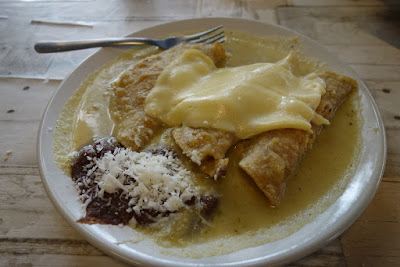 So, I found the set meal to be very mediocre at "Abby's Kitchen".  At the price of 65 pesos ($3.25) one can't expect a gourmet meal, but for only five pesos more the meal at "Fonda Don Tacho" was much tastier!  Don Tacho made it onto my list of places to go... Abby did not.