On Wednesday I took a walk from my apartment to the "colonia" or neighborhood immediately to the south.  It is a small neighborhood called "Ciudad de los Deportes" (City of Sports).  It gets that name from the fact that two major stadiums are located here side by side.

The first stadium that I came to was "Estadio Azul", the home of one of the professional soccer teams in Mexico City: "Cruz Azul" (Blue Cross). 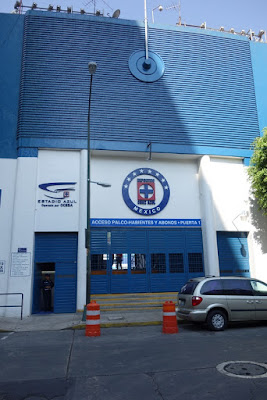 The stadium does not appear very big on the outside.  But peeking inside through one of the gates, you can see that the stadium is sunken with most of the seats and the playing field below ground level. 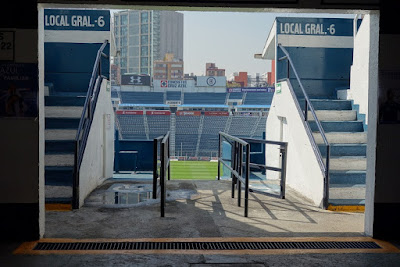 Next door to the "Estadio Azul" is the "Monumental Plaza de Toros", the largest bullring in the world.  It seats more than 40,000 people. 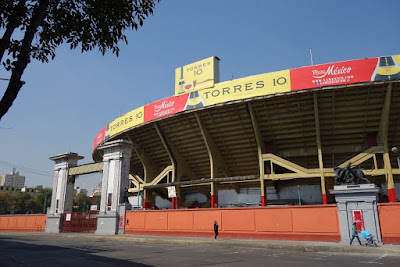 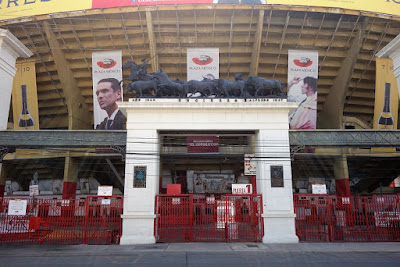 Statues of famous bullfighters decorate the wall surrounding the bullring. 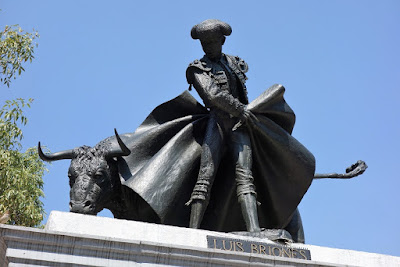 Even though more than half of this blog is about Mexico or Spain, the topic of bullfighting has never been mentioned.  It is a very controversial subject.  "Aficionados" view it as an art form; detractors consider it barbaric.  Bullfighting has actually been outlawed in certain parts of Spain, and in neither Spain nor Mexico does it have the following that soccer has.

I can understand both sides of the argument.  I have seen three bullfights in my life, all of them in Mexico.  The first one in Puebla was OK.  The second one in Acapulco was dreadful.  One of the "matadores" was unable to kill the bull, and the poor creature had to be put out of its misery.  The third bullfight was in the state of Tlaxcala which is where many of the fighting bulls are raised.  It was quite exciting, and I could get a sense of what "aficionados" see in it.  I wouldn't mind seeing a bullfight in Mexico City, if only to see what the interior of the huge "Monumental" looks like.  I doubt that I would ever be able to convince Alejandro to go with me.  He is definitely not an "aficionado".

As I walked through "Ciudad de los Deportes" I noticed that, just as in the neighboring "colonia Nápoles", many of the streets are named after states and cities in the United States.  A couple blocks from the bullring, I spotted the street named after my hometown... "Calle Cleveland"! 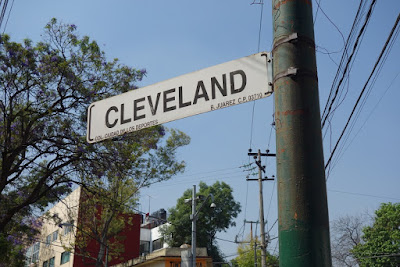 Other streets, however, were named after famous artists, and that continued to be the theme as I walked westward into the neighborhood of "San Juan".  Some street corners even had plaques with a short biography of the artist.

I turned onto "Patriotismo", a major avenue (not named after an artist) that passes through several neighborhoods.  I came to a store with Mexican handicrafts displayed in the windows. 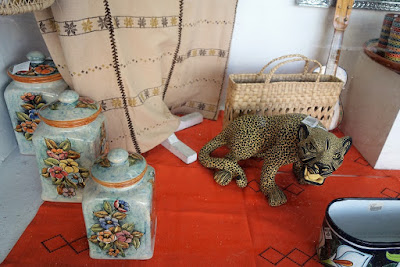 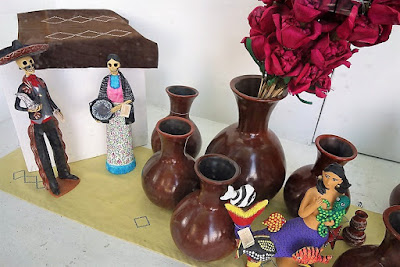 I had stumbled upon one of the "Fonart" stores.  In my last post I said that the Ciudadela Market was a very good place to buy handicrafts.  Well, another good place is in any of the "Fonart" stores, a government sponsored chain which deals in high quality folk arts and crafts.  I was surprised to see a Fonart store in this area, and I was even more surprised that it was bigger and had more selection than the stores in the more touristy parts of the city.  I may have spent as long as an hour looking through the store.  Even though I thought that I had finished my shopping yesterday, I just could not resist making a few more purchases.  I bought a couple more gifts, and for myself I bought a lovely wooden carving of a Lacandon native from the state of Chiapas.
Posted by Retired Teacher at 8:16:00 PM