Even though my apartment is very well equipped, there were certain things that I wanted to buy for the kitchen...  plastic containers for storing leftovers, a mesh strainer, some wooden spoons and a tortilla warmer.  I probably could have found those items at Sears, which is just a couple blocks away in the mall at the World Trade Center.  However, believe it or not, here in Mexico Sears is an upscale department store, and its prices are not cheap even by "gringo" standards.  Instead I wanted to go to a store such as Soriana, Comercial Mexicana or Chedraui.  These chains are all similar to Walmart and sell a wide variety of merchandise... groceries, clothing, housewares, electronics, toys, etc., etc.

I went to Google Maps to find which store would be closest to me.  I found a Chedraui on Avenida Universidad that was 3.3 kilometers away.  It was not located near a Metrobus or subway line, but 3.3 kilometers is 2 miles.  I can walk that!  So I headed out on foot and after 30 minutes I had arrived.  It was located within a shopping mall called "Pabellón del Valle". 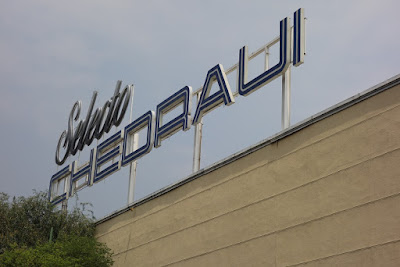 I guess you could say that I have a bit of history with Chedraui.  I can remember shopping at their very first store.  Back in the 70s and 80s I would frequently visit friends in Jalapa, the capital of the state of Veracruz.  Down the street from their home was the first and (at that time) only Chedraui store.  I used to enjoy going there.  It was sort of junky, but you could find all sorts of things there.  That first store was founded in 1971 by Lazaro Chedraui.  Since then, the business has grown to 235 stores all over Mexico, and it is the third largest retailer in the country.  It is still owned and operated by the Chedraui family.

The store I visited yesterday was certainly not "junky".  The supermarket portion of the store was quite fancy with an in-store café and a sushi bar.  I found everything that I was looking for, and when I was done shopping I took a taxi back to the apartment.