On the Wings of Interjet

Yesterday I made the journey to Mexico City, and although it was a very long day, everything went smoothly.  My flight from Chicago to Mexico City was one of the most pleasant flights that I have had in recent years.

I was up in the wee hours of the morning yesterday to catch my 6:45 AM flight on United from Cleveland to Chicago.  The plane departed a few minutes early, and, with the one hour difference in time zones, the flight arrived at O'Hare International Airport the same time that it left Cleveland.  I had a very long layover in Chicago,.  My flight to Mexico City was not going to leave until 1:00 PM.  However I had to retrieve my luggage, take the train to the International Terminal, check in at the Interjet Airline desk and go through security once again.  This was my first time flying Interjet from Chicago, and I wanted to see how long it would take to do everything.

Most overseas flights do not leave until later in the day, and the terminal was nearly empty! 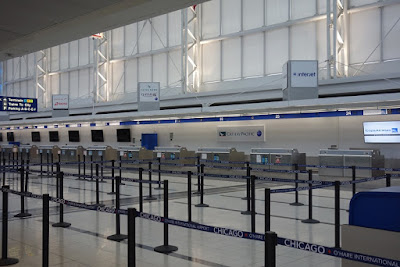 Hard to believe that I am in one of the busiest airports in the country!

Most of the airline counters were unattended, but I spotted some people at the Interjet desk.  The woman there however was with Copa Airlines.  She told me that they share a desk with Interjet, and that Interjet would not be open for check-in until 10:00 AM (three hours before the flight).  I had about 2 1/2 hours to kill.  Fortunately there was a small restaurant in the terminal, and I had a bite to eat since I had not eaten breakfast.  Then I sat and read one of the books that I had brought with me.

At 9:45 people appeared at the Interjet counter, and I was the first to check in.  I wrote in an earlier post that Interjet always weighs the carry-on luggage.  (You are only allowed 22 pounds in your carry-one.)  I was a bit concerned, but I was under the limit.

I then had to go through security.  There is no TSA-PRE checkpoint here, so I had to go through the entire process... take off my shoes, remove my laptop from my carry-on, etc.  However, there was no line and I was in and out within a few minutes.

Now I still had a couple hours until boarding was to begin.  I had something else to eat, and I did more reading.  (I'm glad that I brought several books with me, because by the end of the day I had read two thirds of this one.)

Our plane arrives at the gate. 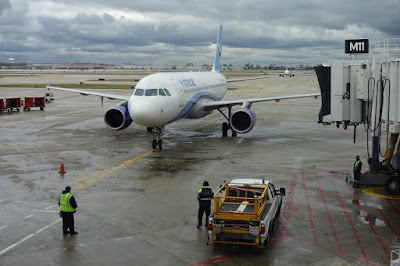 We boarded, and we actually pulled away from the gate fifteen minutes early.   We were already in the air at the time that we were supposed to depart.

I have written before that I really like Interjet because they do not try to cram as many people into the plane as possible.  Everyone has legroom! 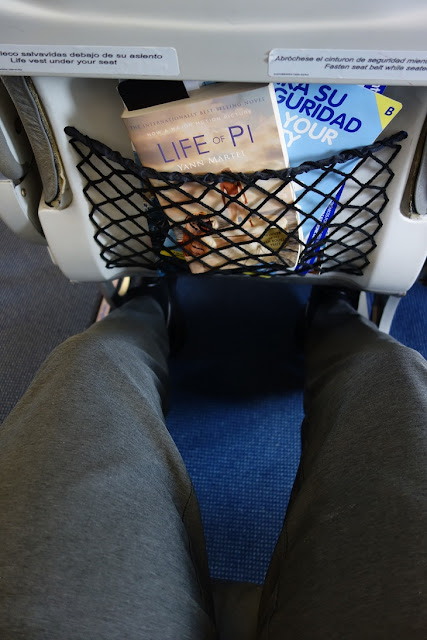 I am able to fully stretch out my legs!

The flight was not crowded.  Perhaps only one third of the seats were occupied.  I was the only person in my section of three seats... which made the flight even more comfortable. The flight attendants were very pleasant.  And we were even served a light lunch... a sandwich on a crusty roll (sort of a "mini-torta") and a bag of chips.  For your beverage you could order beer, wine, or even hard liquor free of charge. (I opted for water.)  Later in the flight they came around with the beverage cart again and gave me another bag of chips.  No, it wasn't gourmet dining, but it was more food than I have ever had on a flight to Mexico for years.  Interjet brings back memories of the good old days when flying was a pleasure.  My only (minor) complaint was that they did not have the "tourist card" forms, so I had to fill it out when arrived at immigration at the airport.

We arrived in Mexico City a full half hour early. 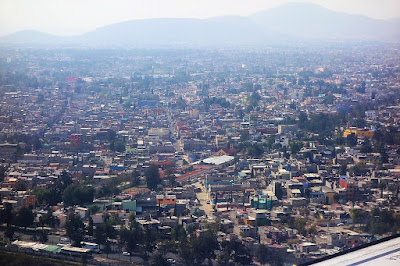 I already have my flight reservations for the next trip to Mexico City in June.  I am glad that I reserved a flight from Cleveland to Chicago that leaves a bit later in the morning, since I definitely was not pressed for time during this layover.