A Taco Joint Nearby

Wherever you are in Mexico City, you are never far from a "taquería". When I was staying in the Condesa neighborhood there were several that I would frequent.  Now that I am staying in the Nápoles neighborhood, I wanted to find a good taco joint nearby.

Down the street a block and around the corner is a place called "Taquearte".  (I believe it is part of a chain.)  I sat down at a table on the sidewalk.

I began with "crema de frijol" (bean soup), and it was good. 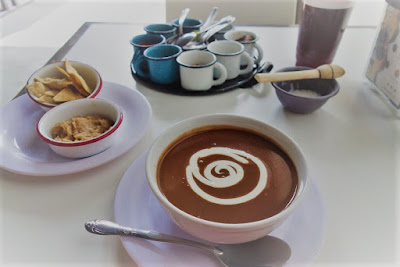 You also see in this photo a little snack of chips and bean dip, as well as an assortment of different salsas to put on the tacos.  I tried most of the salsas (except for the "salsa habanera" which the waiter warned me was very "picante").  They were very good.

I ordered two "tacos al pastor"  (to the right) and one "chorizo" (sausage) taco. 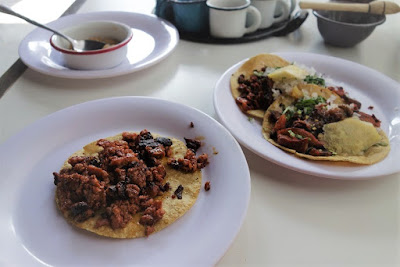 I suspect that many Mexicans would object that this place is overpriced.  This was no cheapo $3.50 lunch.  Along with a beverage and dessert my bill came to about 200 pesos or $10 US.  In spite of that, I think that "Taquearte" will go on my list of places to eat in the neighborhood.