Nápoles, the neighborhood where I am staying, is a fairly compact district bordered on the east by busy Insurgentes Avenue and hemmed in on the north and west by "viaductos", multi-lane beltways.  It is dominated by the Mexico City World Trade Center.  The 52 story building is the fourth tallest in Mexico City. 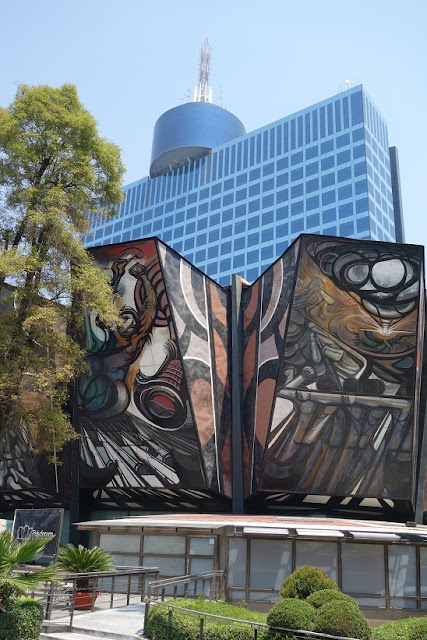 Next to the World Trade Center is the neighborhood's one tourist attraction, the Polyforum Siqueiros (shown in the foreground of the above photo).  This cultural center contains an enormous mural by Mexican painter David Alfaro Siqueiros which is supposedly the world's largest mural.

The World Trade Center was begun in 1966.  It was originally planned as a hotel, "el Hotel de México", and it was supposed to be completed in time for the 1968 Summer Olympics.  The main tower was not finished until 1972, however, and the hotel project never got off the ground.  Many residents of Mexico City still refer to the building as "el Hotel de México". 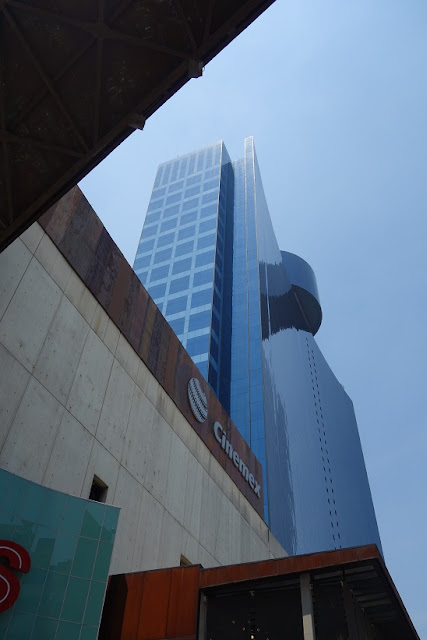 In the 1980s plans were made to turn the unused building into an international business center.  After extensive remodeling, it opened in 1995 as the Mexico City World Trade Center.  The complex includes business offices, a convention center, a theater for concerts and stage shows, a multi-screen cinema, retail business space and a 45th floor revolving restaurant.

Walking around the complex, and seeing all the U.S. chains, it would be easy to think that one were north of the border. 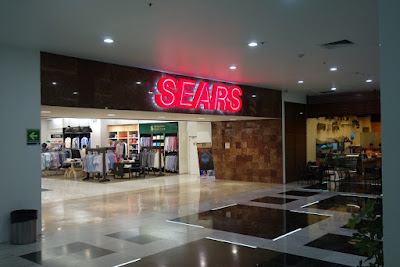 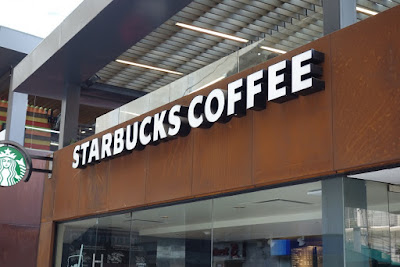 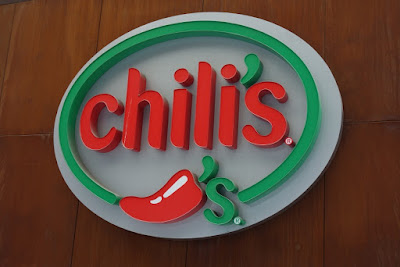 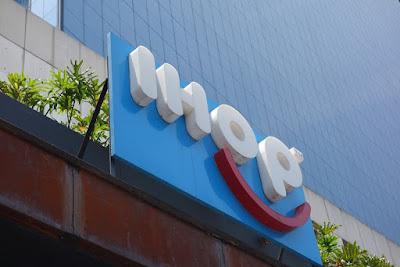 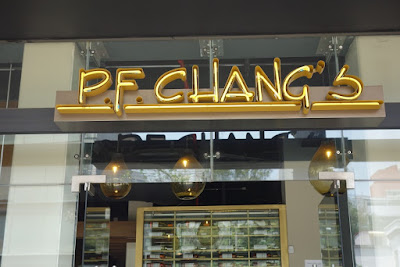 Behind the World Trade Center is another modern office tower which includes a shopping mall.  The Superama supermarket there is where I do my grocery shopping. 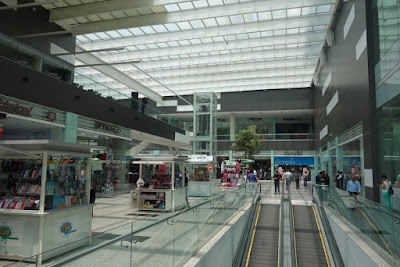 When the neighborhood was first developed in the 1930s, the houses here were all built in a neo-colonial style of architecture.  Some of those homes still remain. 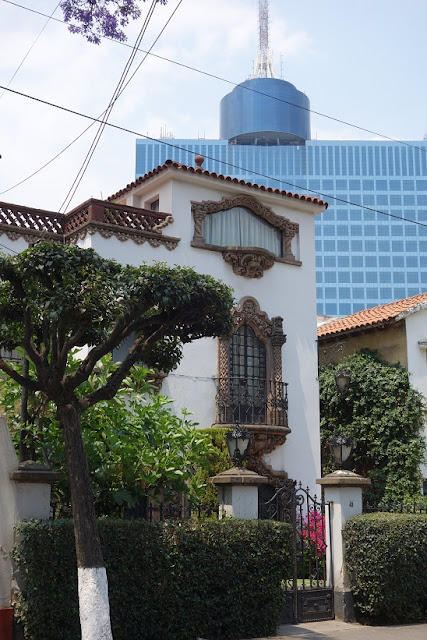 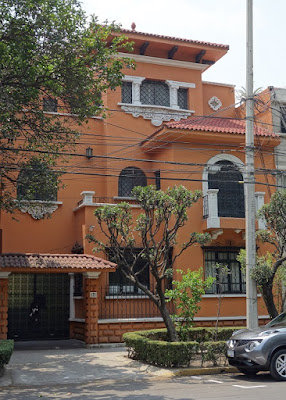 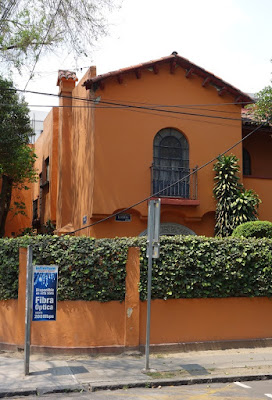 Today, however, most of the neighborhood is made up of modern apartment buildings... and more are being constructed. 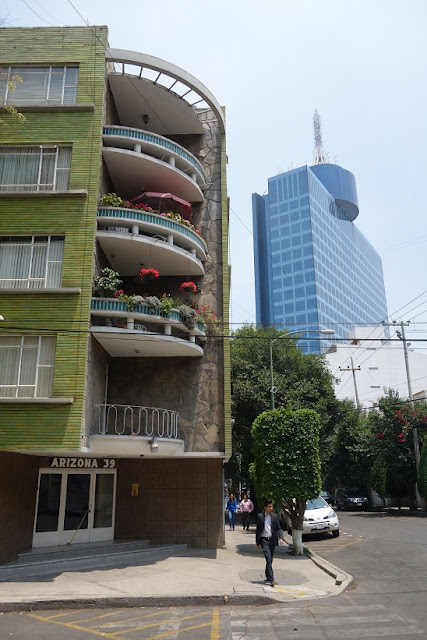 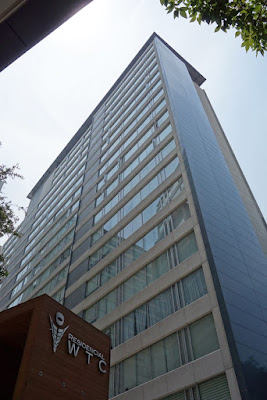 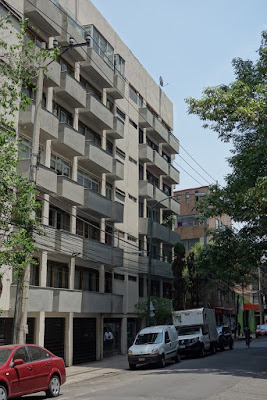 There is one park in the neighborhood, Parque Alfonso Esparza Oteo. 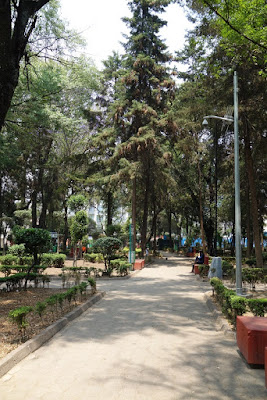 The park is named after a Mexican composer who was popular in the 1920s. 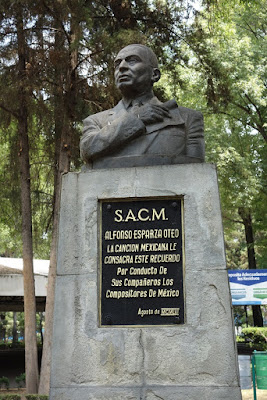 The park also contains an outdoor pavilion where concerts are performed.  The pavilion has seen better days, but the mural painting at the back of the stage is interesting.

This little shrine to the Virgin of Guadalupe in the park is the only evidence of religion that I have seen in the neighborhood.  During my wanderings here I have yet to see a single church, which is very unusual in Mexico. 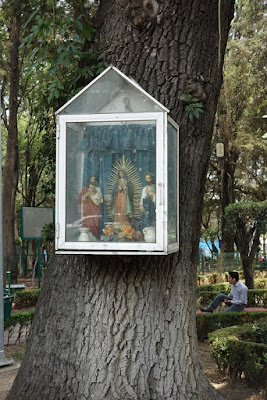 So that is a quick look at "Colonia Nápoles".