On the south side of Mexico City there is an area known as "El Pedregal" (the stony ground).  It is a huge lava field which was created by repeated eruptions of the Xitle volcano between 5000 B.C. and A.D. 400.  The region was long considered useless until the 1940s when it was developed as a neighborhood of luxury homes.  A large portion of "El Pedregal" is occupied by the campus of the University of Mexico.   The University has set aside a sizeable parcel of this land as an ecological preserve.  At the northern edge of the preserve the biology department maintains a botanical garden.

That was my destination on Thursday.  I took the Metrobus far to the south to the "Ciudad Universitaria" stop.  From there, having previously consulted Google Maps, I found my way on foot to the Botanical Gardens. 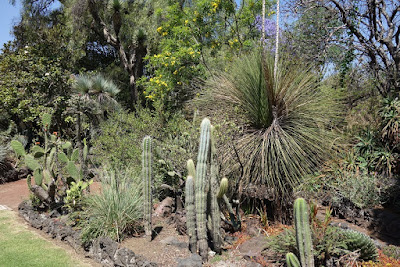 First, let me get my one negative comment out of the way.  The greenhouse of tropical plants was quite sad.  Not only is the structure itself looking rather shabby, but the collection of plants within cannot begin to compare with what we have in the conservatories at the Cleveland Botanical Gardens. 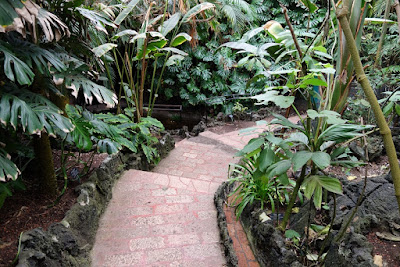 However, the outdoor displays of cacti, succulents and agaves, planted amid the rugged outcroppings of volcanic rock were quite spectacular.  As I wandered along the paths, the city of 20 million people seemed very remote. 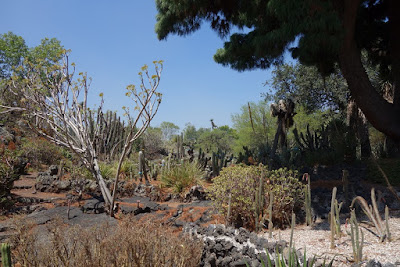 There are a huge number of different varieties of cacti, and yuccas represented. 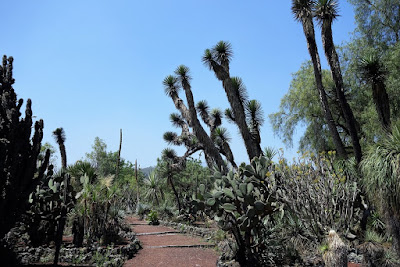 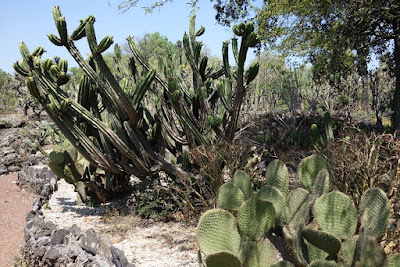 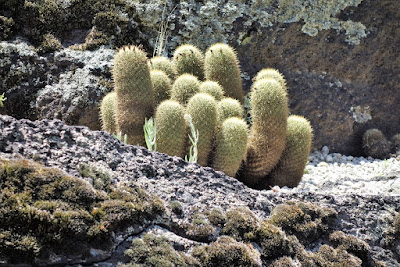 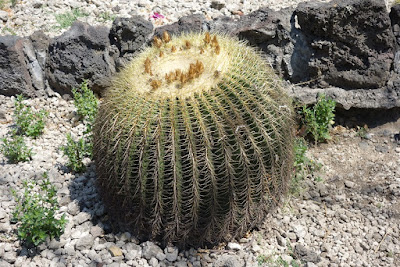 Some of the cacti were blooming. 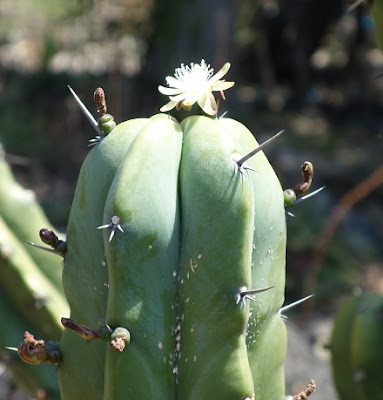 The "nopal" or prickly pear is one the most common cactus in central Mexico.
The paddles of the prickly pear are a common vegetable in the Mexican diet. (The thorns are removed first, of course.)  "Nopales" are very high in fiber. 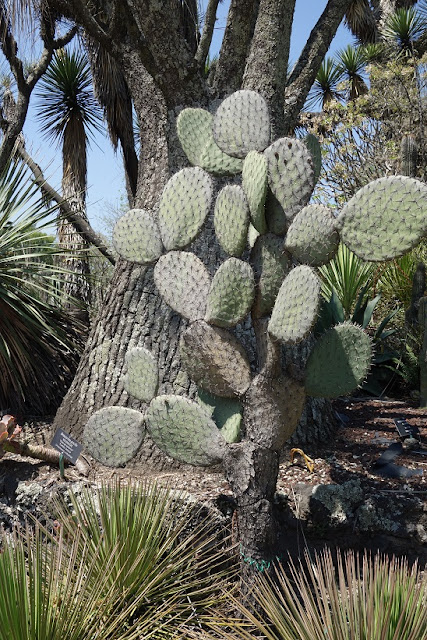 Some of the "nopales" were also in bloom. 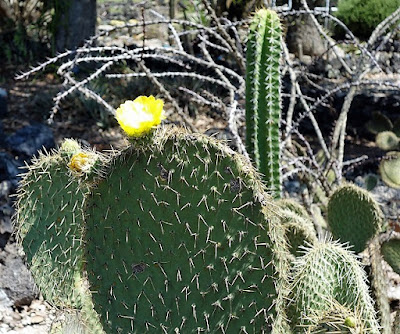 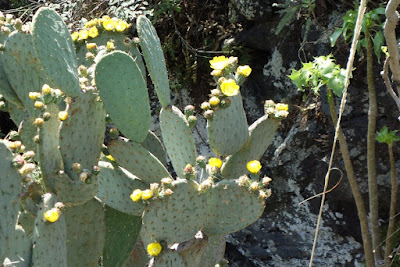 The fruit of the prickly pear, which are called "tunas", are also eaten. 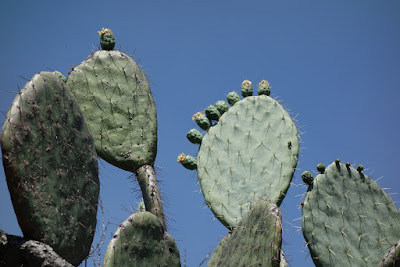 I recognize this tall, columnar cactus from traveling across the dry regions of Oaxaca.  Entire mountainsides there are covered with it. 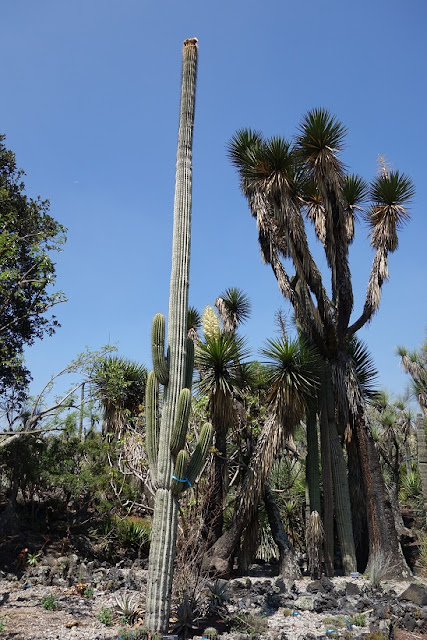 The gardens are interspersed with ponds and water channels cut out from the volcanic rock. 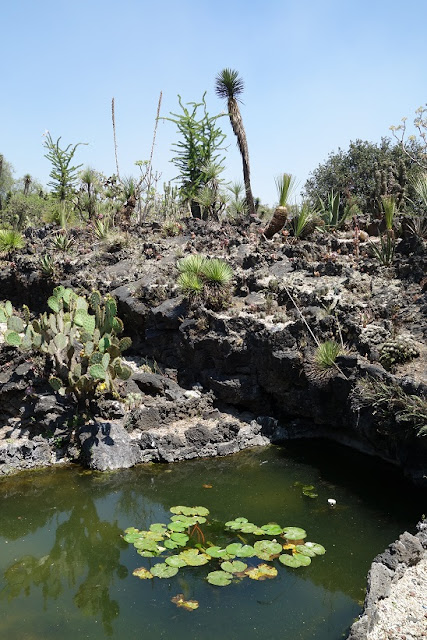 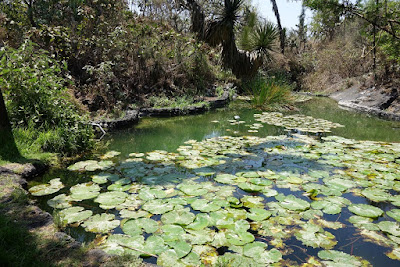 There is even a small waterfall. 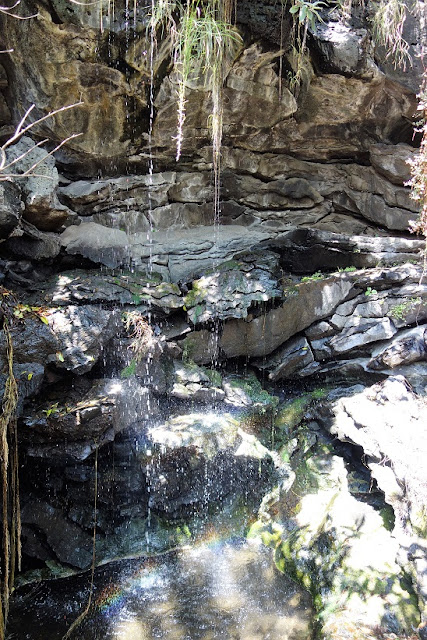 Many of the more than 200 species of agave are native to Mexico.  The agave is not a cactus, and it is not related to the aloe which has similar leaves.

The agave americana ia known in Mexico as the "maguey".  The plant was extremely useful to the natives of pre-Hispanic Mexico.  They used the leaves as thatch for their huts, the fiber of its leaves was used to make string, and the thorns were used as needles.  The root can be roasted as food.  The juice of the plant was used to make a mildly alcoholic beverage called "pulque" which is still drunk today.

The "maguey" is also sometimes called a century plant because it takes a very long time for it to bloom.  When it is about to bloom, the plant shoots up a very tall spike, as you can see in the picture below. 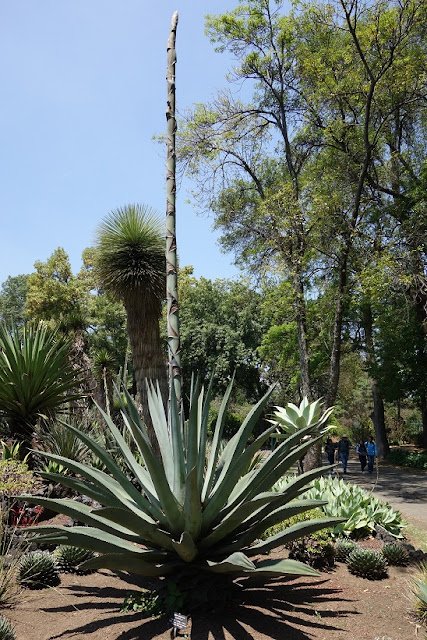 These stalks were blossoming. 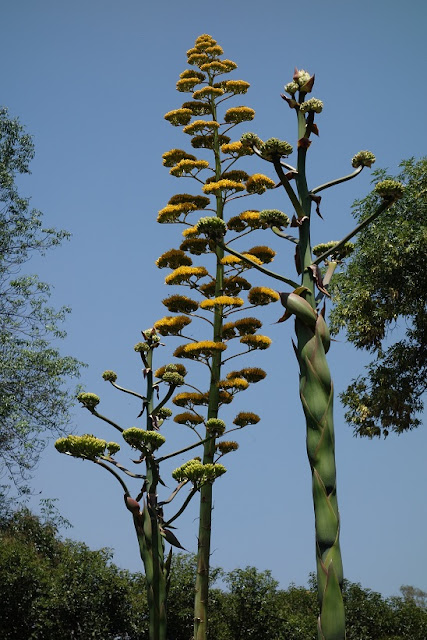 After blooming, the maguey plant dies.

There are a wide variety of agaves in the garden. 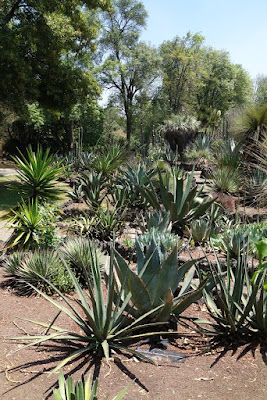 This is one of several types of agave which is used to make the distilled liquor mezcal. 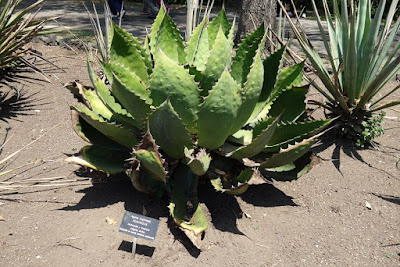 One type of agave which I was unable to find in the garden was the blue agave or agave tequilana.  Yes, that is the plant from which tequila is made.

A visit to the botanical gardens is definitely worth the effort, and it is a wonderful respite from the congestion of the city. 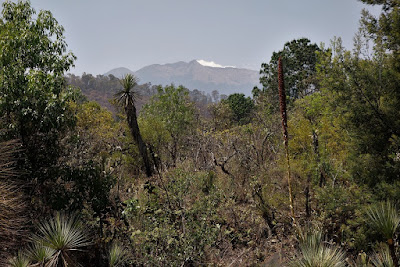 On this trip or a future trip, I may do some hiking along the trails which traverse the ecological reserve beyond the botanical gardens.
Posted by Retired Teacher at 9:38:00 AM