Here are some restaurants in the neighborhood where I have eaten.  Which ones will make it to my list of places to revisit?

1.  Cobá - This is just a short walk from my apartment.  It is part of a chain of modest restaurants serving Yucatecan food.  I love the cuisine of Yucatán, so one day I stopped there for lunch.

I ordered the "sopa de lima"... chicken soup flavored with lime.  It was just so-so. 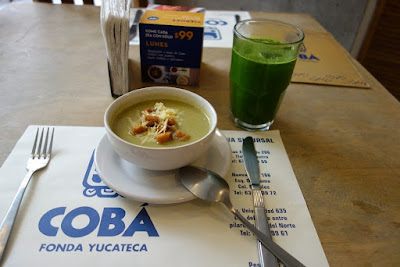 I then had a "torta de cochinita pibil".  A "torta" is a Mexican sandwich on a thick, crusty roll.  It was filled with "cochinita pibil", a tasty pork dish from the Yucatán.  Again, it was just OK, far from the best that I have had.  (And I was disappointed that they did not serve a bowl of pickled red onions as a garnish for the sandwich.) 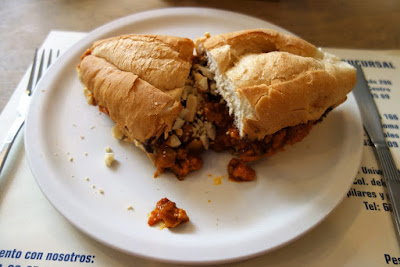 The waiter was friendly and the price was reasonable, but I don't think that I will return.

2. Fonda Doña Blanca - This place not far from the apartment is only open in the afternoon for the midday meal. 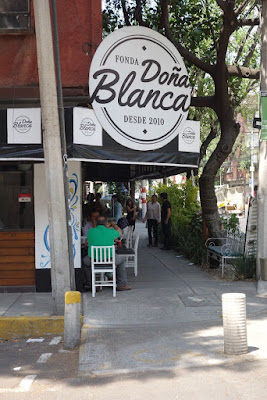 The waiter was one of the most unfriendly that I have come across in Mexico.  No "Buenas tardes", no "Buen provecho"... he just took my order and brought my food without saying hardly a word.

The first two courses were brought out together.  The tortilla soup and the macaroni in cream were very ordinary. 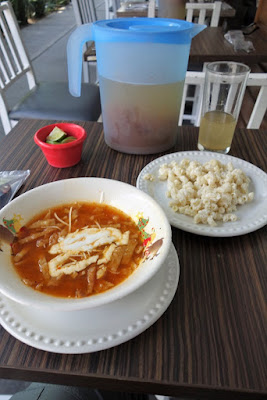 The main course of chicken fajitas with diced potatoes and strips of poblano peppers and the obligatory serving of beans to the side was quite tasty. 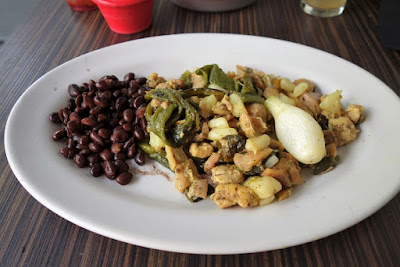 3. Bajío - Bajío is a chain of moderately upscale restaurants that specialize in traditional Mexican cooking.  Alejandro and I have been to a couple of them, and the food has been very good.   Looking at Google Maps I discovered that there was a Bajío just a few blocks away on Insurgentes Avenue.  So last Friday, we went there for dinner.

They were out of one of the specials which I wanted, so I went with the chicken breast in mole... a complex Mexican sauce.  (Yes, the waitress puts a bib on you, so that you don't stain your shirt with the sauce.)


I was not impressed with the mole.  Alejandro, who is a connoisseur of mole, had a taste and said that it was overpowered with too many cloves and too much cumin.

So, even though I like the Bajío chain in general, I would not return to this one.

4.  Fonda Trotamundo - After so much negativity, I will end on a positive note.  This little restaurant across the street from the World Trade Center was crowded, and when I left there were people waiting in line to enter.  Due to its location, it is a popular place with businesspeople working across the street.  The name, by the way, means Globetrotter Inn. 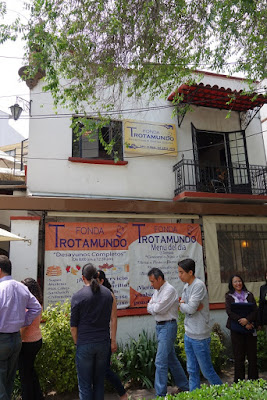 Like most places the restaurant offers an inexpensive (70 pesos) set menu.  I began with cream of carrot soup.  At first taste, it was rather bland, but there was a bowl of very tasty salsa on the table.  I put a dollop in my soup, and that made all the difference in the world. 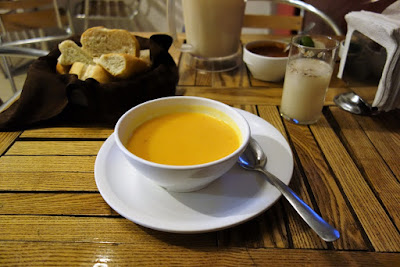 My second course was white rice.  That certainly sounds boring, but it had been cooked in chicken broth and had a very nice flavor.  I added some more of the salsa, and it was even better. 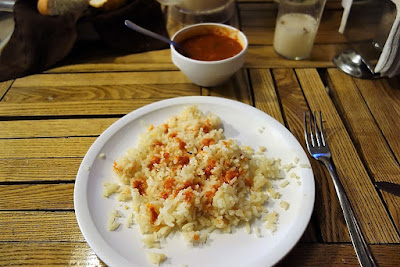 For the main course I had chicken in a sauce with strips of poblano peppers. (And of course a serving of black beans.) It was very simple, but tasted good. 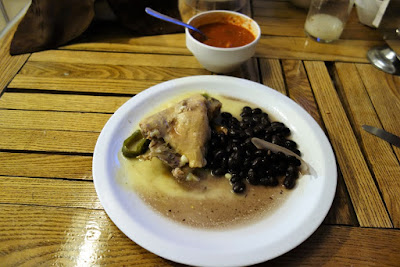 The waiter, who was busy with the crowd, still had the time to be courteous.
So Fonda Trotamundos makes it onto my list of places to patronize again.