On the night of Holy Saturday Alejandro always takes his mother to the vigil service at their parish church.  I went along with them.

I admit that I am not a churchgoer.  I knew that there are Saturday night vigil services in Catholic churches in the United States, but I didn't know how similar they are from one country to another.  I did a bit of research before writing this post, and I found out that the vigil follows the same basic format throughout the Catholic world.  Regardless, it was all a new experience for me.

We arrived at the church at 7:30 P.M. so that we would be sure to find seats.  By 8:00, when the service began, the church was full.  However Alejandro said that there were not as many people as in previous years.

The lights in the church were all turned off, and a purple curtain covered the wall behind the altar. 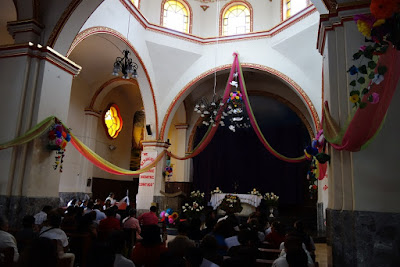 The only light is the twilight coming through the windows of the church.

As night began to fall, the parish priest entered with an enormous lighted candle.  From this flame the candles of the congregants were lighted. 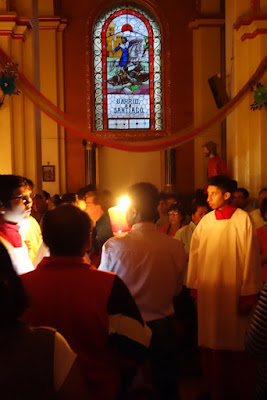 I was hesitant to take pictures.  However, Alejandro assured me that it was all right.  Indeed, many of the locals were taking pictures with their cell phones.

There were then a series of chants by the priest with responses from the congregation. 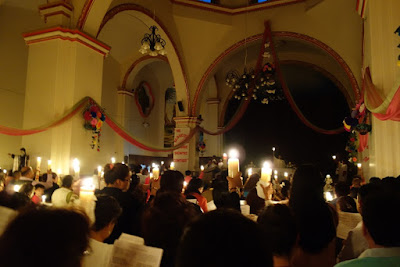 Then all the candles were extinguished except for the large candle.  The second part of the service was a series of Bible readings, each followed by a chant and a prayer.  This went on for at least an hour. Even Alejandro admitted that this is the most boring part of the service.

Then suddenly, lights are turned on, the curtain is drawn revealing an image of the risen Christ, and the congregation is applauding and ringing little bells. 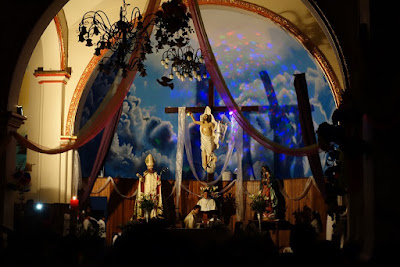 In the third portion of the service, the parishioners renew their vows of baptism, and the priest and deacon come around sprinkling the people with holy water.

The final portion is the celebration of the Eucharist in which the congregation partakes in communion.

The entire service lasted nearly three hours.  I was glad to have had the opportunity to share this tradition with Alejandro and his mother.