Trying Out the Breakfast Menu

I wrote about the restaurant "El Sabor del Tiempo" where Alejandro and I dined a couple weeks ago.  On Wednesday morning I went back to see what their breakfasts are like.  There is a good chance that I will have friends visiting me in Mexico City later this year, and I want to have a list of nearby places where I can take them for breakfast. 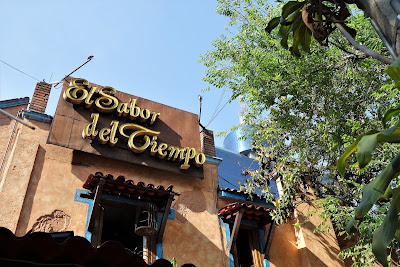 See the World Trade Center in the background peaking through the tree?

The restaurant was fairly busy with businessmen.  They must also get their share of tourists since the waitress asked me if I wanted a menu in English.  The selection is all very traditional Mexican fare... no pancakes or other "gringo" fare to be found.

I ordered something called the "torta poblana". 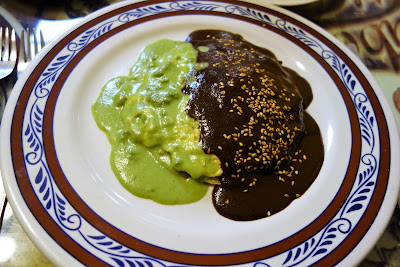 A "torta" is usually a type of sandwich served on a large, crusty roll.  However, this was obviously something different.  I had to dig a bit underneath the sauce with my fork to see exactly what was there.  At the bottom there was ham and cheese between two tortillas.  On top of that there was a layer of scrambled eggs.  Half of it was covered with "mole poblano" (the most famous of the "mole" sauces) and the other half was covered with a sauce made from poblano peppers.

My only criticism is that my bill was incorrect.  They charged me for a side of "frijoles" which I did not order.  I brought it too the waitress's attention, and she corrected the bill.

My breakfast was very tasty.  I am not sure, however, if it would be a good place to take "gringo" visitors.  For my taste buds the breakfast was not overly spicy.  But after looking over the menu, there do not seem to be many choices for those who cannot tolerate "picante".  Well, I guess we could go to the IHOP at the World Trade Center for pancakes.