Alejandro's birthday is this week, so last weekend I wanted to take him out for dinner.  The neighborhood where I am has loads of restaurants, but most of them are chain restaurants or taco joints (or exorbitantly expensive places such as the restaurant on top of the World Trade Center).  I was looking on Google Maps for a nice place within walking distance.  I found a place a few blocks away which I had never noticed before.  It's called "Sabor del Tiempo" (which might be loosely translated as "Flavors of the Old Days").  As the name suggests it serves traditional Mexican dishes.  The reviews were generally good, so we decided to go there.

The décor was "cutesy" picturesque... sort of like many so-called Mexican restaurants in the U.S.  But the food turned out to be truly authentic.  I would classify our favorite restaurant in Mexico City, "Angelopolitano", as gourmet cuisine from the state of Puebla.  This place serves old fashioned, country cookin' from the state of Hidalgo... a different style of food, but also very delicious.

Our waiter suggested that we begin with the appetizer tray.  A lady prepared our appetizers on a large "comal" or griddle. 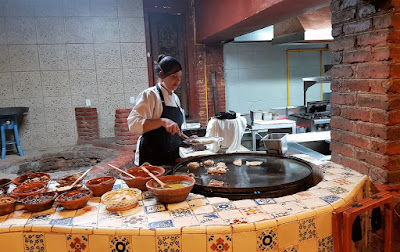 The appetizers were a meal unto themselves, and they were very tasty.  When we saw the size of the tray we were glad that we had decided not to also order soup before the main course. 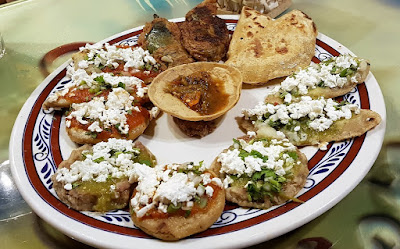 Alejandro ordered steak marinated in mezcal.  He said it was delicious.  I had a taste, and even though I do not care for mezcal, I had to agree. 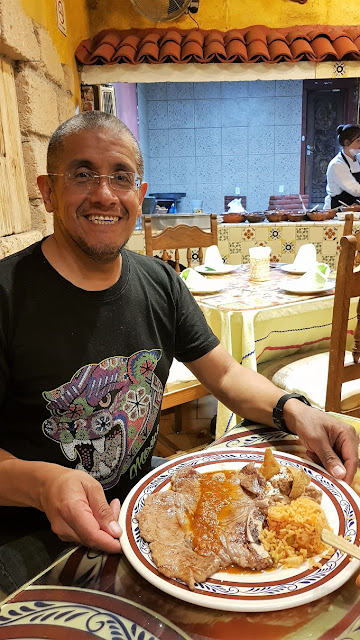 I had the "chamorro", pork shank.  When the waiter brought out my plate, I could not believe the size of the "chamorro".  And even though there was a large bone in the middle of it, there was still a lot of meat there. 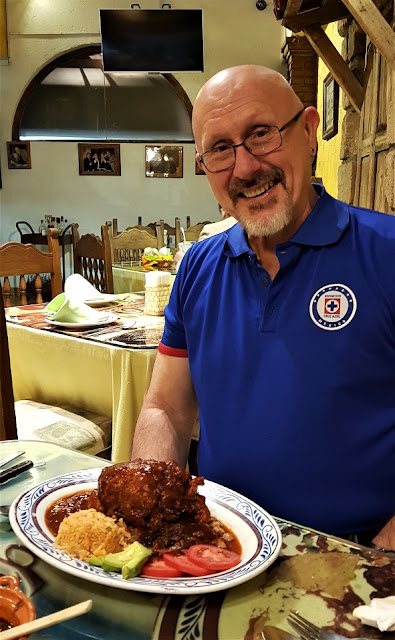 The shank was covered in an "adobo" made with two different kinds of "chiles"... "morita" and "guajillo".  The meat was delicious and tender, and the sauce was spicy buy not incendiary. 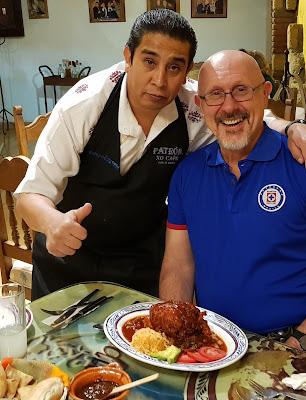 The next thing I knew, the bartender came out with a "sombrero" and plopped it on my head for a photo op.  I don't know if it's something they do with "gringo" visitors, but it really should have been Alejandro wearing the hat since he was the birthday boy. 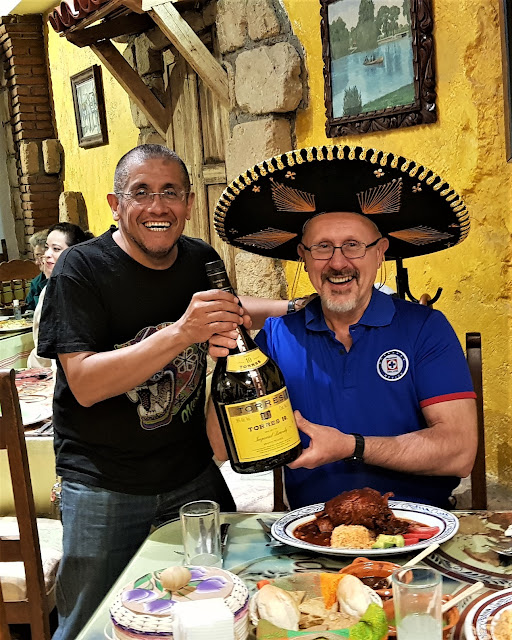 In spite of the "sombrero" thing... something I would expect from a tourist trap... "Sabor del Tiempo" is a very good restaurant, and it was a good choice for Alejandro's birthday supper.

We were so full that dessert was out of the question.  The bill for the two of us was 803 pesos... $44 U.S.  We both thought that it was a very reasonable price for the quality and quantity of our meal.  Although "Sabor del Tiempo" didn't make it to the very top of our list, it definitely is a place that we would visit again.  I will have to get out my "Club América" shirt.
Posted by Retired Teacher at 10:06:00 AM