The Zócalo Through the Ages

For as long as I remember, under the city in the Zócalo subway station, there have been three models in glass cases portraying what the Zócalo, the city´s main plaza, looked like in different times in history.  I was passing through the station on Thursday, and for some reason the models, which I have passed scores of times, looked better than before.  I took pictures of them, and then saw a sign which said that they had been recently renovated. 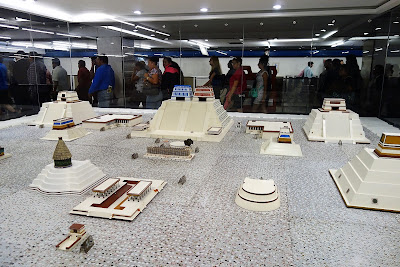 Just before the Spanish conquest, this is what the magnificent ceremonial center of the Aztec capital of Tenochtitlán looked like.   The large structure to the rear was the main temple.  There were two shrines atop the pyramid.  The blue one was dedicated to Tlaloc, the rain god; the red one was the shrine of Huitzilopochtli, the god of war.  The excavated foundations of the temple are today next door to the Cathedral of Mexico City. 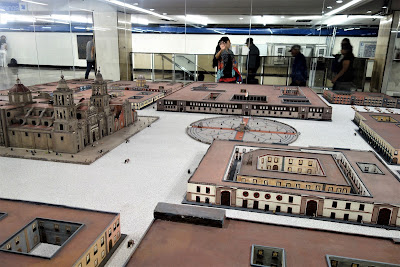 Mexico had just won its independence a few years before, and the Zócalo still looked the same as it did in the colonial period.  The recently completed Cathedral, the largest in the New World is to the left.  Within the circle on the plaza the statue of King Carlos IV of Spain still stood, although that symbol of colonial rule would soon be removed.  A good portion of today's Zócalo was taken up by the Parián Market building (just below the circle).  The long building above the circle had been the Viceroy's Palace during colonial times, and became the National Palace after independence. 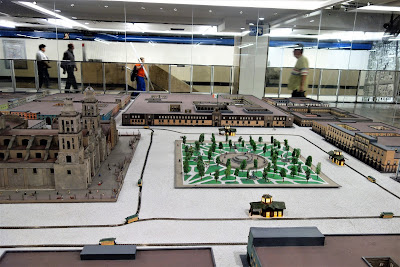 Mexico entered the 20th century under the dictatorship of Porfirio Díaz.  Díaz wanted to make the capital a modern city.  As you can see trolley cars ran around the Zócalo.  Trees and gardens were planted in the middle of the plaza.