The Flower in Mexican Culture

On Wednesday I took the Metrobus (the new Route 7) and got off right in front of the National Museum of Anthropology in Chapultepec Park.  It's great to be able to reach the museum via public transportation. 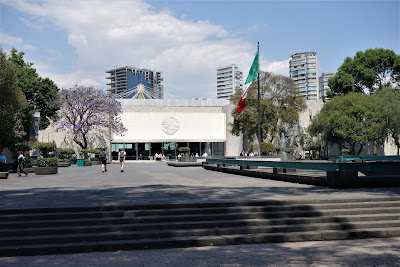 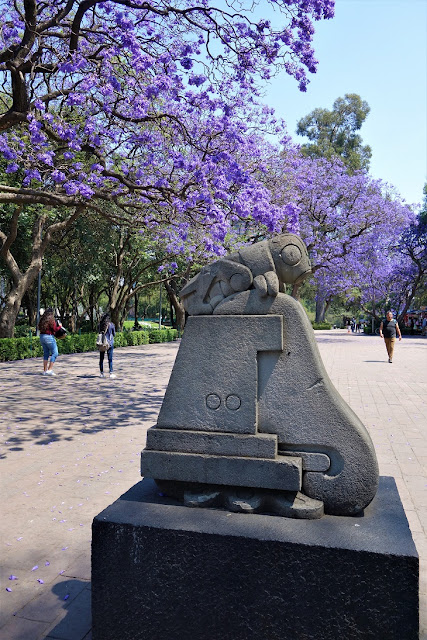 Chapultepec in the Aztec language means "Grasshopper Hill", and
the place was represented with this glyph.

My reason for coming here (as if I need a reason to revisit this magnificent museum) was to see a special exhibit which is currently on display... "The Flower in Mexican Culture". 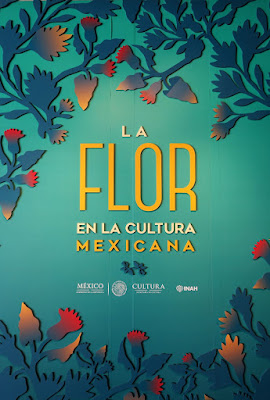 The exhibit gathers together hundreds of archaeological pieces, works of art, and handicrafts to show the importance of flowers in Mexico from pre-Hispanic times to the present.

The pre-Hispanic cultures viewed flowers as precious and associated them with the gods. 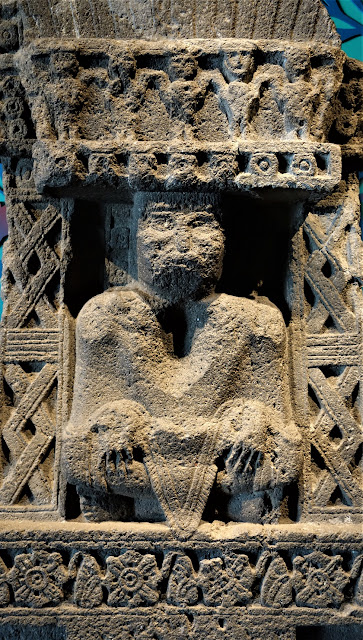 Xochiquetzal was the Aztec goddess of flowers, love, and pleasure.
She was responsible for the germination of plants. 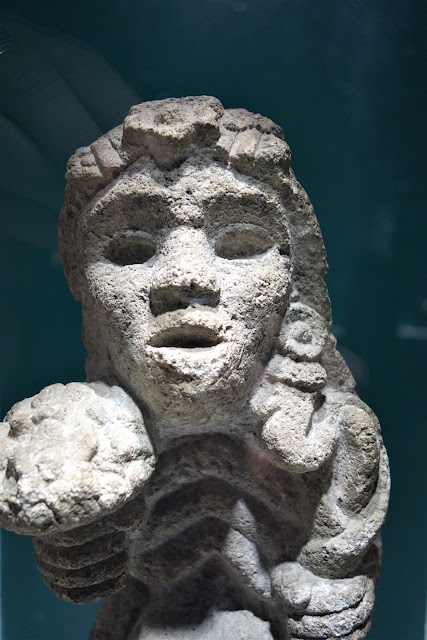 Her son Xochipilli (which translates as "Flower Prince") was the god of beauty, art and music.  He is portrayed here holding a bouquet of calla lilies. 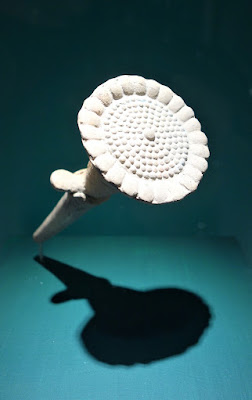 A scepter for Xochipilli in the form of a sunflower 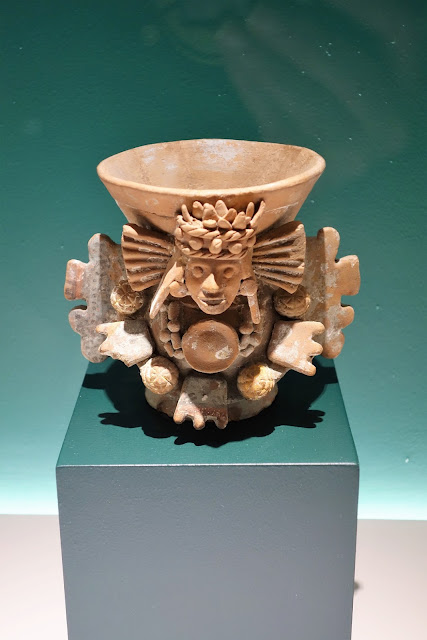 The god of agriculture is shown adorned with flowers. 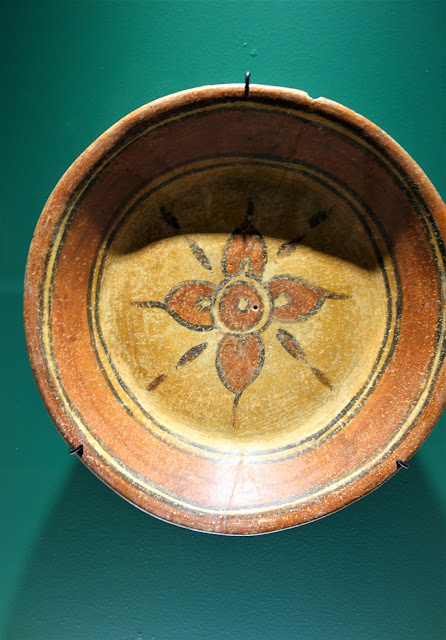 In pre-Hispanic art, flowers are often depicted with four petals to represent the four cardinal directions. 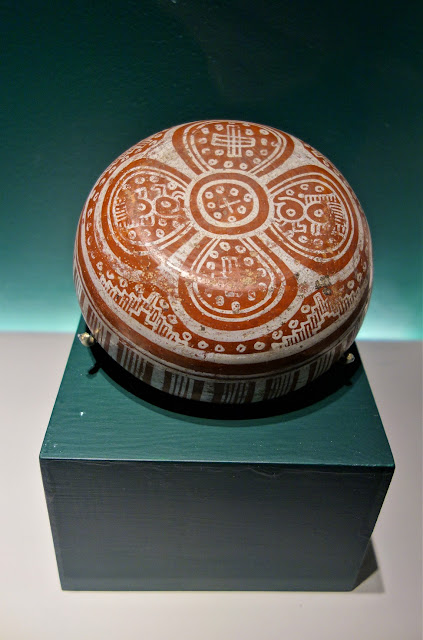 When the Spanish arrived, they brought their own religious iconography in which flowers carried symbolism. 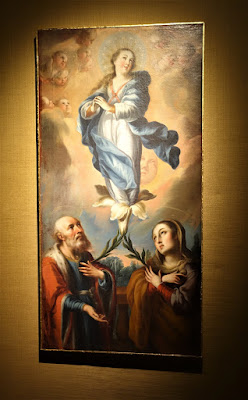 In this colonial painting of the Immaculate Conception, Mary emerges from a white lily, a flower which symbolizes purity and which is associated with the Virgin. 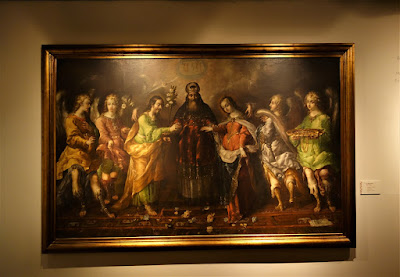 The famous Baroque painter, Cristóbal de Villalpando, used flowers in his painting of ¨The Wedding of the Virgin¨. 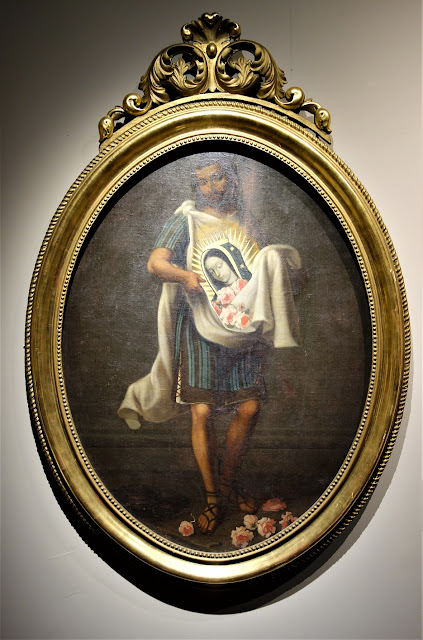 Flowers have an important role in the story of the Virgin of Guadalupe, Mexico´s patron saint.  The Virgin appeared to Juan Diego and told him to pick roses to take to the Bishop.  He carried the roses in his cloak, and when he presented the flowers to the Bishop, the image of the Virgin was imprinted upon his cloak.

This colonial painting is attributed to Miguel Cabrera, another famous painter of colonial Mexico. 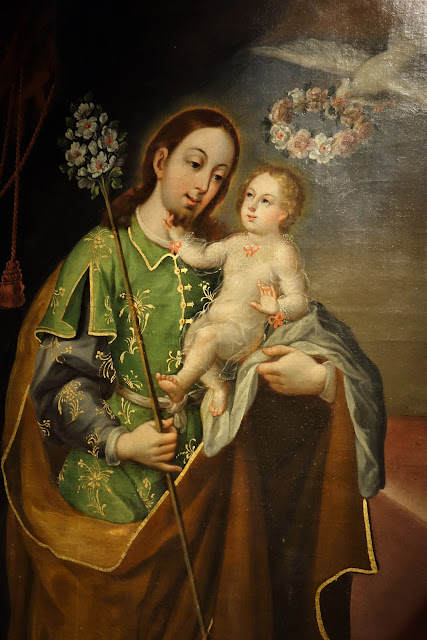 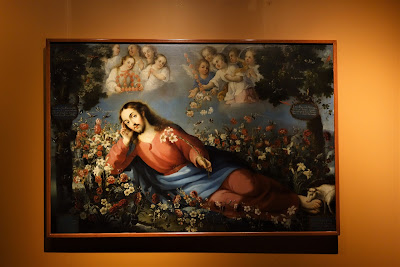 "Christ in the Garden of Delights" - a flowery Paradise 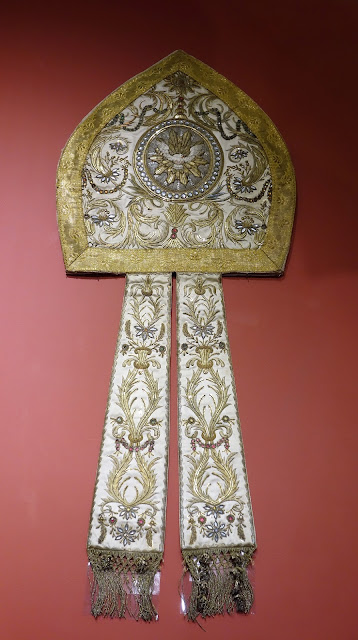 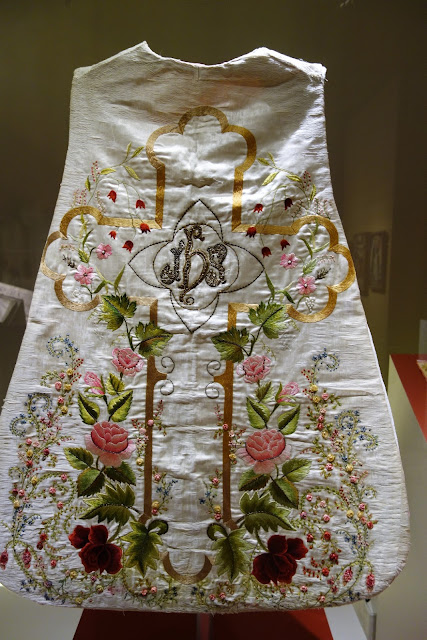 Most early colonial churches have a stone cross in front. 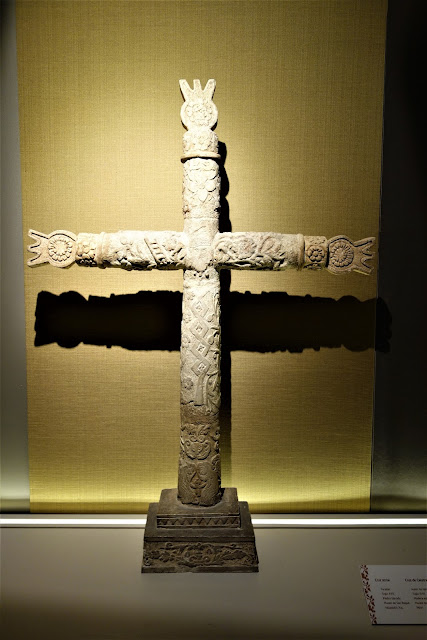 However, these crosses never have the body of Jesus on them because the priests did not want the native peoples to associate the crucifixion with human sacrifice.

The face of Jesus would be shown in the center of the cross. 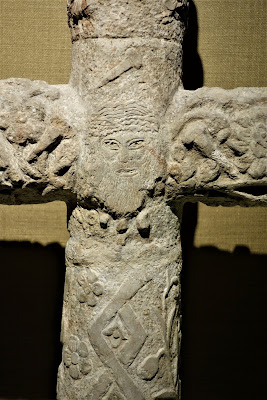 And on the arms of the cross, flowers would represent the stigmata. 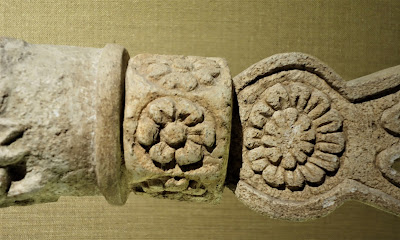 Flowers are a frequent motif in Mexican decorative arts and handicrafts. 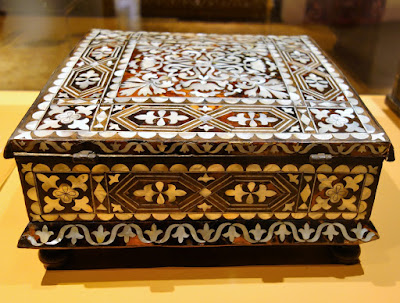 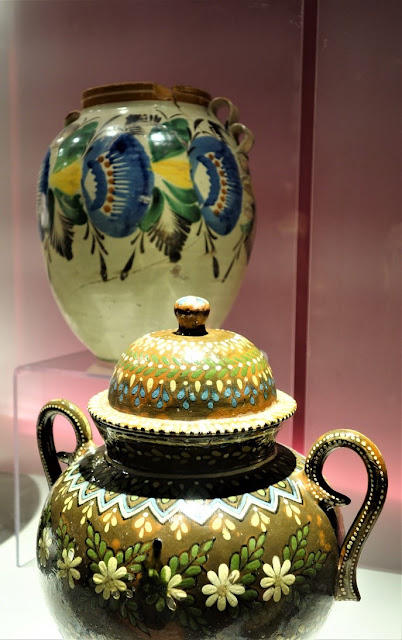 
In the town of Huamantla in the state of Tlaxcala, the streets are covered with "carpets" made of colored sawdust and flowers each year for the Feast of the Assumption.  The beautiful designs are then trampled underfoot by the religious procession. 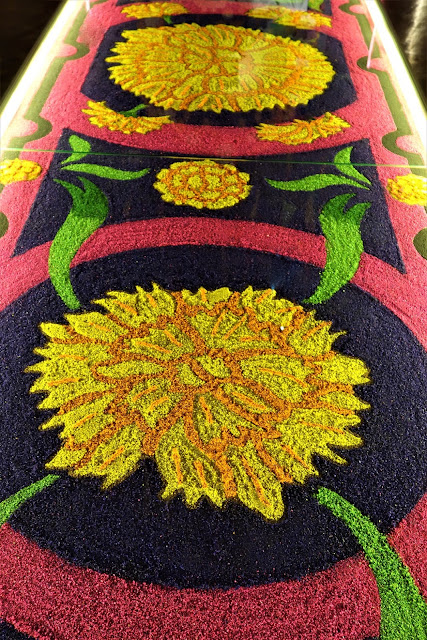 If you have read my posts about the Day of the Dead (or if you have seen the movie "Coco") you already know that flowers, especially marigolds, are in important part of that celebration. 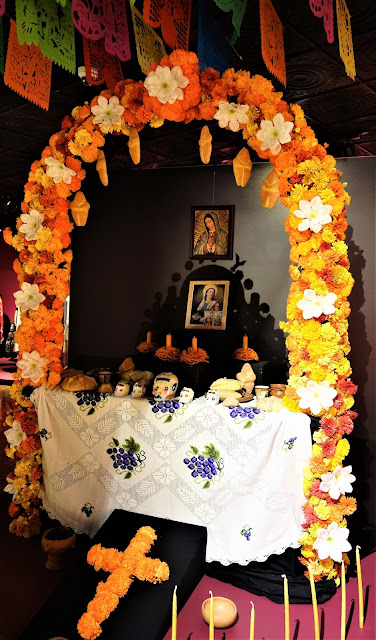 Many of the regional outfits of Mexico are vividly decorated with flowers. 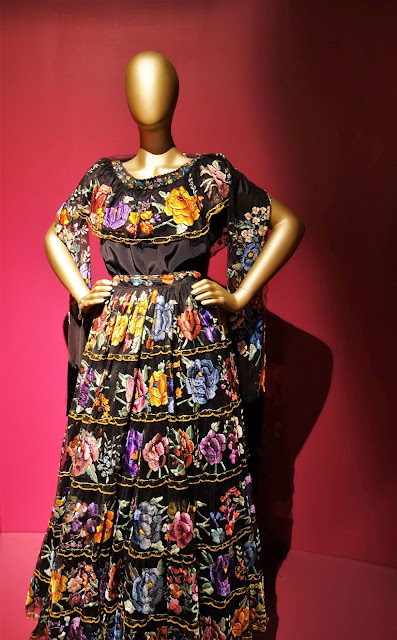 The traditional woman's dress from the state of Chiapas 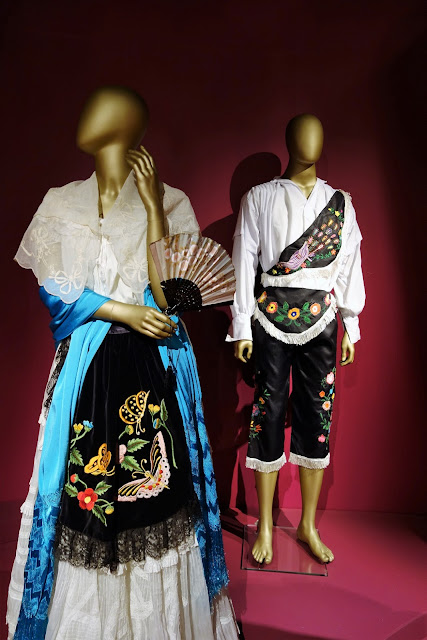 Two traditional outfits from the state of Veracruz:
the woman's "jarocha" dress and men's attire from the Totonac tribe. 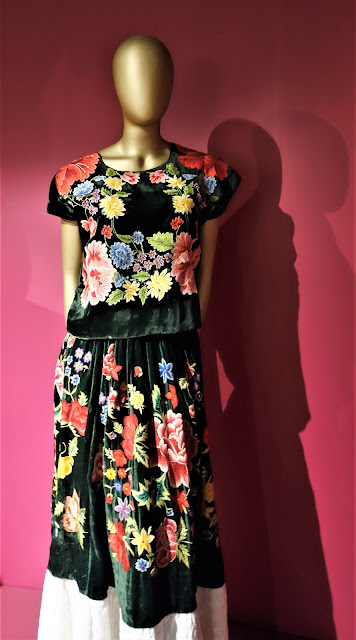 The special exhibit is excellent and well worth a visit.  It will be running through the month of June.