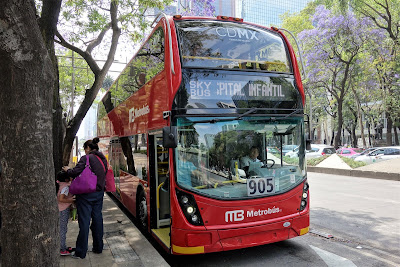 In February the long-awaited and often controversial Route 7 of Mexico City's Metrobus system was inaugurated.  A fleet of 150 double-decker buses known as "Sky Buses" travel along the city's most famous boulevard, the Paseo de la Reforma, and beyond, all the way to the northern limits of the city.  I was eager to try out the new route, and one day last week I spent a good portion of the day riding the bus back and forth and back again.

First I took the subway to the National Auditorium station because from there it is just a few steps down Reforma to one of the new Metrobus stops.  The "Auditorio" stop is the second stop on the route, and I figured that at that point the bus would not be too crowded.  I wanted to be able to ride on the upper level, and that is only permitted if there are seats available.  No standing is allowed upstairs or on the stairs.  My plan worked out as I had hoped, and there were plenty of seats.  One word of advice to "gringos" of normal stature... you will need to crouch down a bit as you reach the upper level.  The roof is not very high. 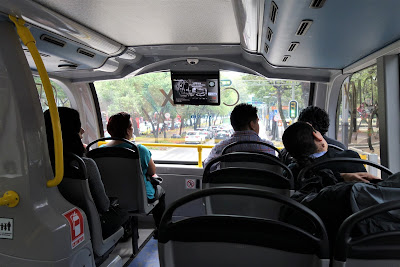 I apologize for the quality of the photos.  Trying to take pictures from a moving bus through a window that is reflecting light and is not perfectly clean is problematic.  Even when the bus stopped there would often be a tree or a lamppost in the middle of my view.  (This is a major reason why I dislike those tourist "hop-on, hop-off" buses that are found so many cities, including Mexico City.)

The bus proceeded along the tree-lined Paseo de la Reforma. 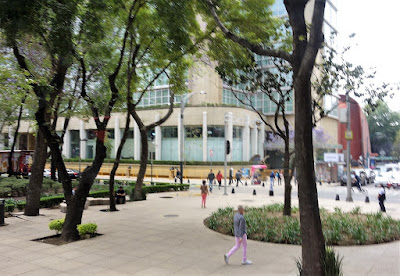 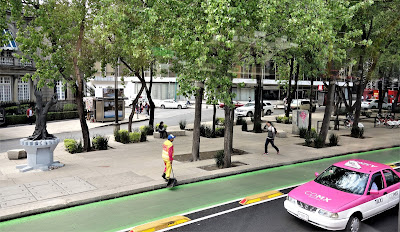 I had a face-to-face view of some of the statues of historic figures that line the boulevard. 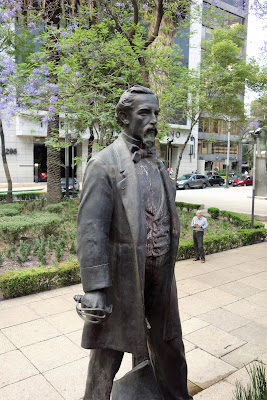 As the bus continues northward, we leave the elegant portion of the boulevard well-known to tourists, and pass through less attractive neighborhoods.  We are on the fringes of Tepito, one of the city's most notorious districts. 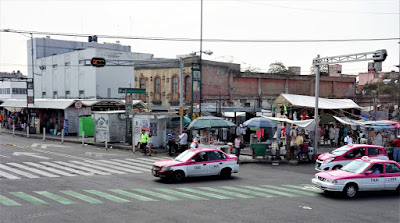 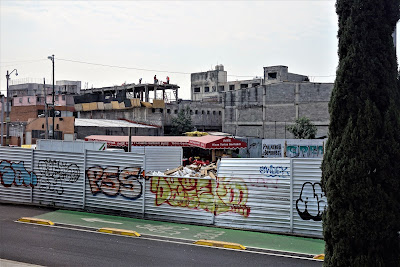 There were interesting examples of street art on some of the buildings. 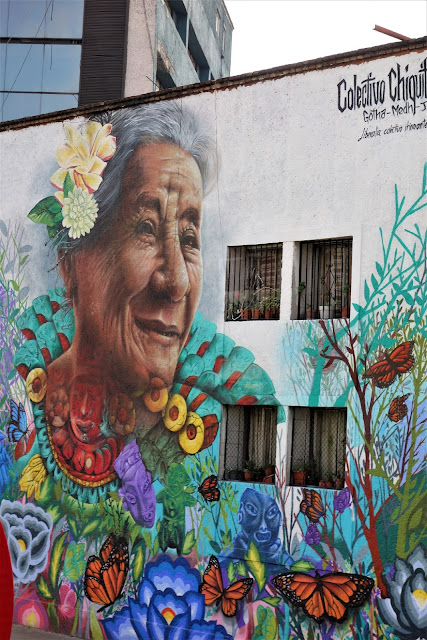 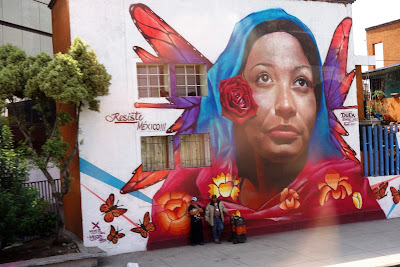 Even along this stretch of the boulevard, there are "glorietas" (traffic circles) with monuments such as this one in honor of South American independence hero José de San Martín. 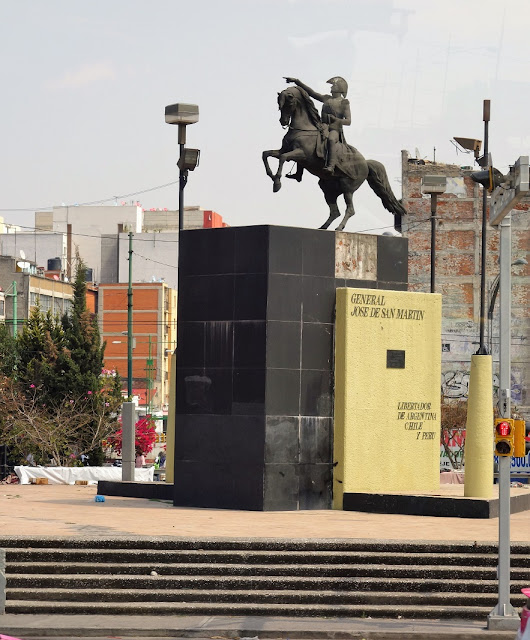 I moved toward the front of the bus where I could get pictures through the front window.  The Paseo de la Reforma changes names and becomes the Calzada de los Misterios. 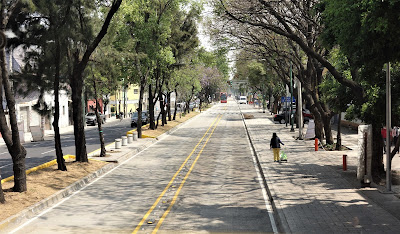 Misterios leads to the Basilica of Guadalupe.  Along the boulevard there are fifteen shrines at which pilgrims headed to the Basilica recite the rosary.  They were built in the late 1600s although today about half of them are modern reconstructions of the originals. 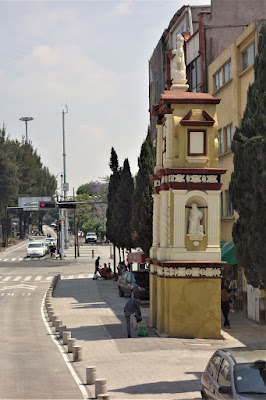 The bus route passes the Basilica of Guadalupe, which is dedicated to Mexico's patron saint... 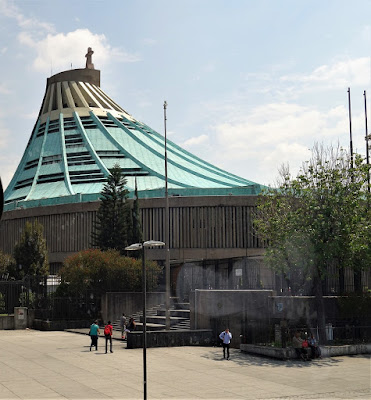 ...and reaches the end of the line near the northern city limits at the "Indios Verdes" stop.  The stop is named after the two large bronze statues of Aztec warriors which stand in the nearby park.  I will discuss the history of these statues in my next post. 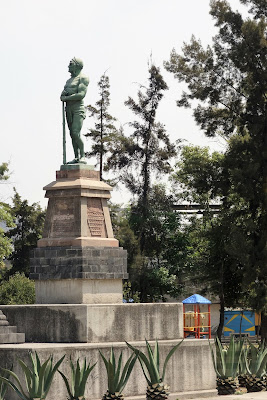 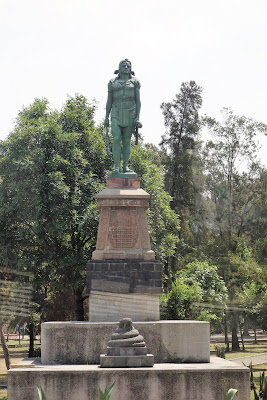 I boarded another bus to go back.  This time I grabbed a seat in the first row to take photos through the front window. 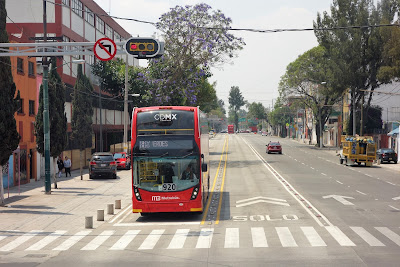 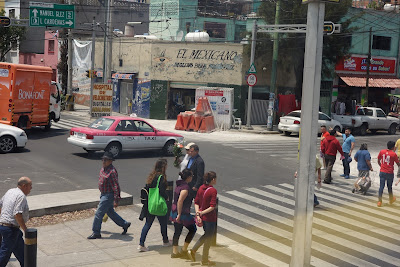 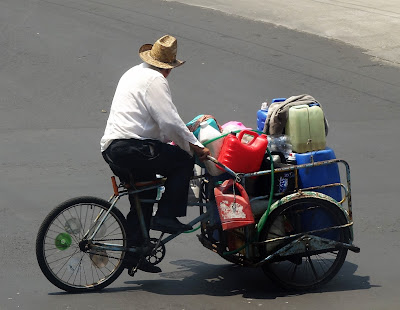 These makeshift tents house homeless families.  Are they victims from last September's earthquake? 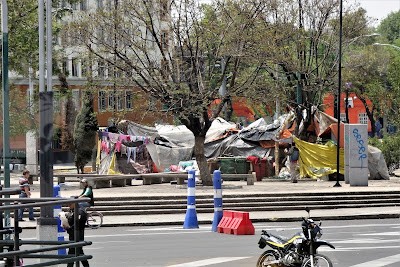 We return to the "nice" part of the Paseo de la Reforma with its modern skyscrapers. 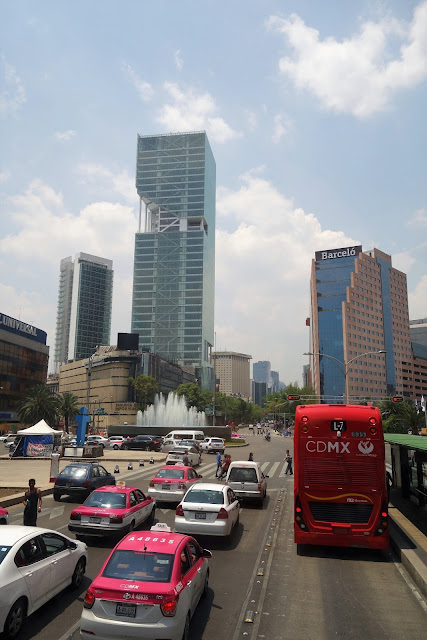 From my front row seat I am able to get some better shots of the sights along this stretch of the Paseo de la Reforma.

The Monument to Christopher Columbus... 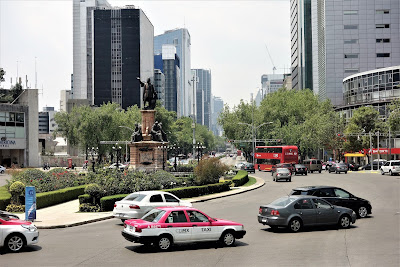 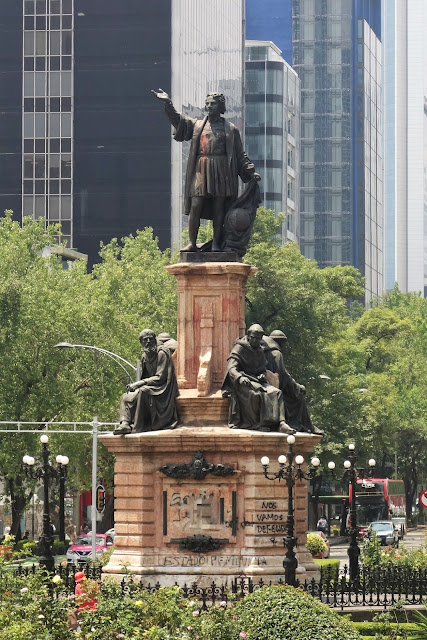 the Monument to Cuauhtémoc, the last Aztec emperor... 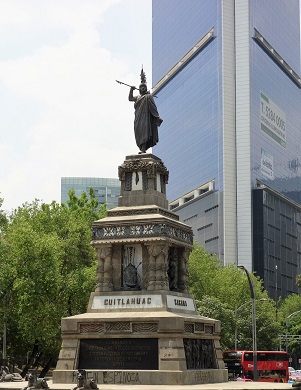 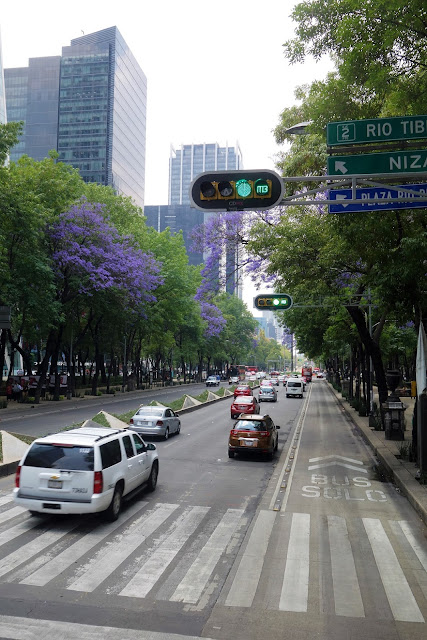 the traffic circle which, for obvious reasons, is known as "La Palma" and in the background the Monument to Independence... 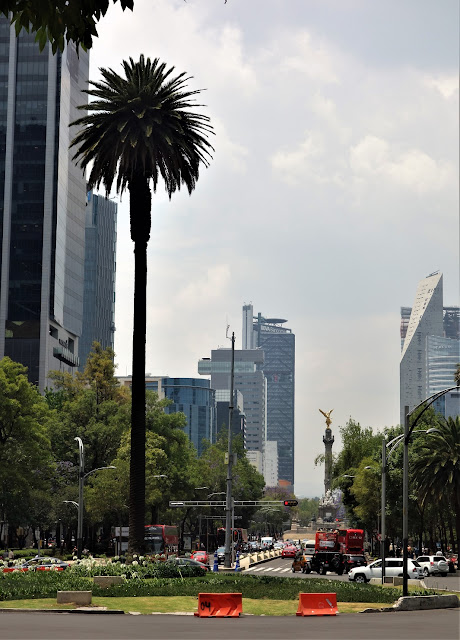 a closer view of the Independence Monument... 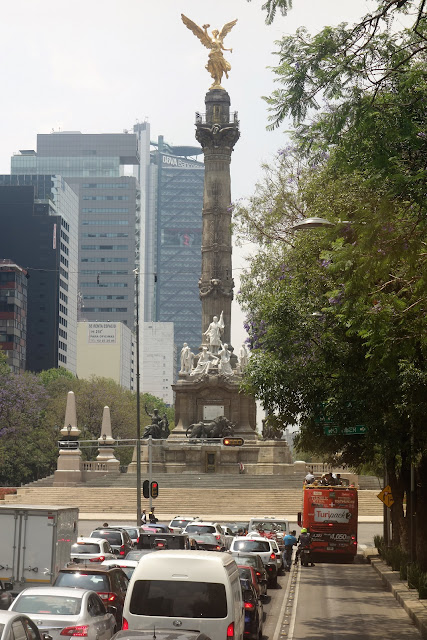 and the Diana Fountain. 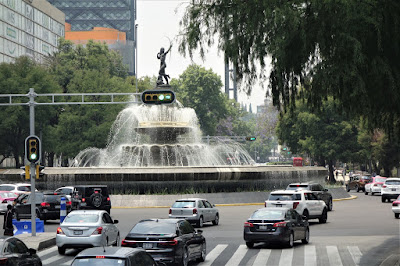 The route nears its end as it passes through Chapultepec Park. 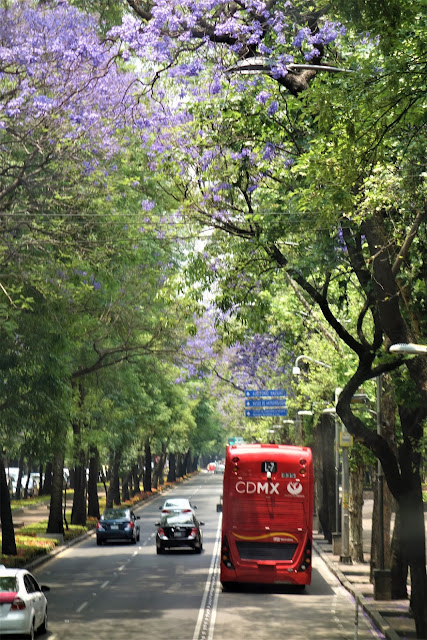 The monolithic statue of Tlaloc, the rain god, stands in front of the National Museum of Anthropology. 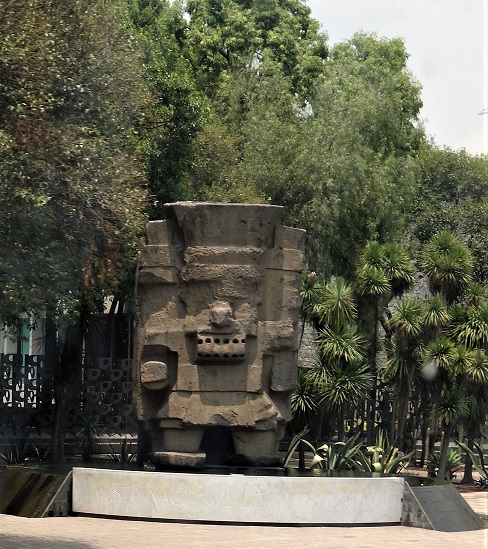 The southern terminus of the route is at the Campo Marte, the base for the Presidential Guard and a venue for military and government events.  It is marked by an enormous Mexican flag and a monument commemorating the 100th anniversary of the Mexican army. 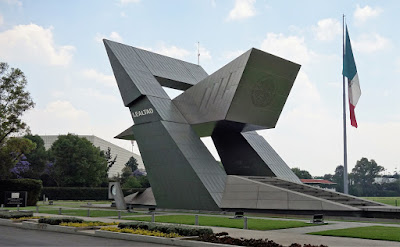 At this point it was starting to rain.  So I hopped onto the Metrobus a third time and took it to the Reforma 222 Shopping Mall where I had lunch and waited out the rain.