Object of the Object : Presidential Campaigns

Given that Mexico City has over 150 museums, it is not surprising that I have not been to all of them.  Last Friday I added another to the list of museums that I have visited.  I went to the neighborhood of Roma Norte to a place with the odd name of "el Museo del Objeto del Objeto" (the Museum of the Object of the Object).  It has an enormous collection of all sorts of everyday objects with only a small portion displayed at any one time.

The museum is housed in one of the old houses built in the early 20th century when Roma Norte was one of the most fashionable neighborhoods in the city. 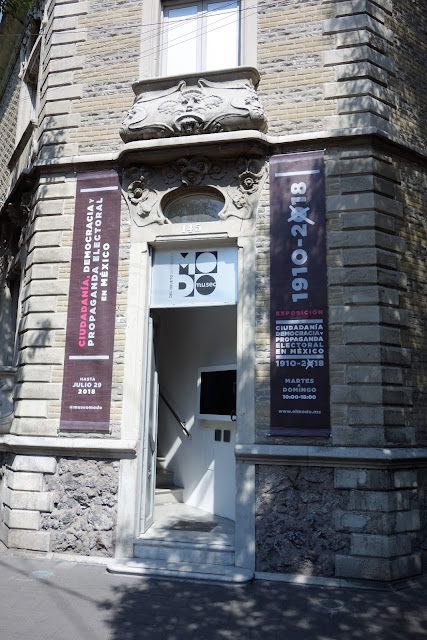 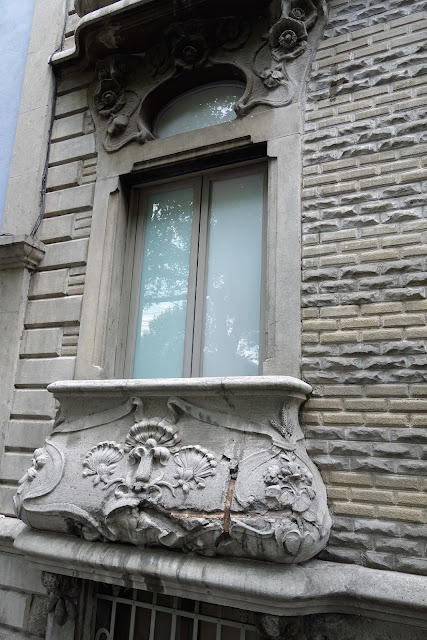 This is a presidential election year in Mexico, so it is fitting that the current exhibit is a display of photos, posters, newspaper clippings and memorabilia from over a century of presidential campaigns.  Using some of the items in the exhibit, here is my very simplified presentation on Mexican presidential politics.

The museum exhibit begins with the year 1910.  The aging Mexican dictator, Porfirio Díaz, announced in that year that he was going to run for a seventh term. 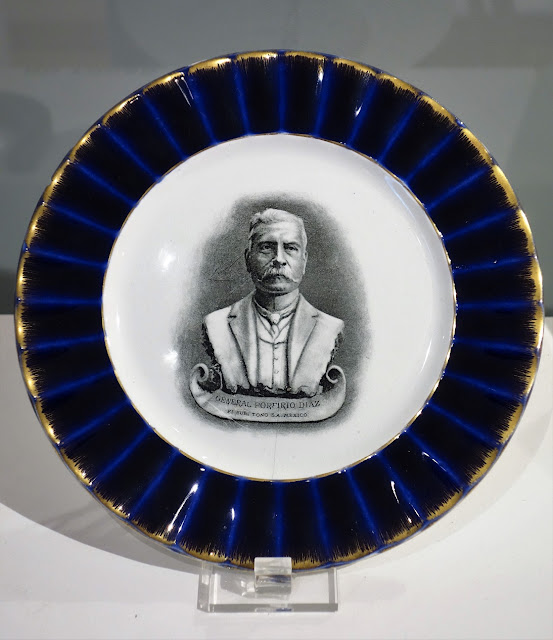 As a result, Mexicans of many political persuasions rose up against Díaz, and he was deposed in the Mexican Revolution.  One of the most important precepts of the Revolution was "No reelection".  Today Presidents may serve only one six year term.

However, instead of one man ruling the country for term after term, Mexico got one-party control of the government.   PRI (Partido Revolucionario Institucional - the Institutional Revolutionary Party) governed the country for decades.  There was never any doubt as to who was going to win the presidency.  It was always the PRI candidate who was selected by the outgoing President.  Nevertheless, they still went through all the hoopla of a campaign with posters and buttons and campaign speeches. 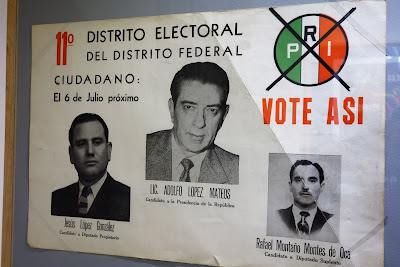 (By the way, the X through the PRI symbol does not mean opposition to PRI.
It is telling voters to mark their ballot for PRI.)

There were other political parties.  They just weren't allowed to win.   The major opposition was from the conservative, largely Catholic, party, PAN (Partido Acción Nacional - National Action Party).  In most Presidential elections PAN was "allowed" to get around 10% of the vote in the official tallies. 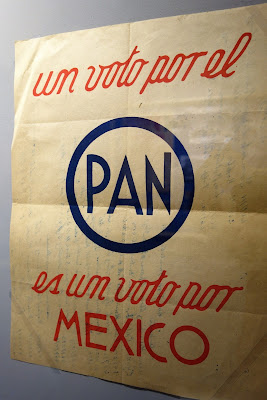 PRI's monolithic control of the government began to slip in the 1980s.  People were disgusted with the government's pathetic response to the disastrous Mexico City earthquake of 1985.

In 1988 the PRI candidate was Carlos Salinas de Gotari. 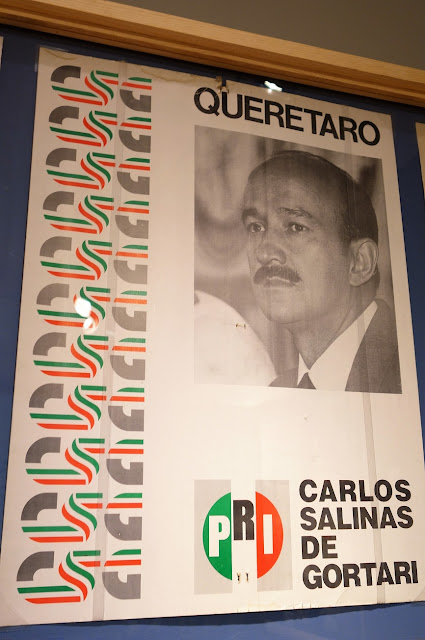 He was opposed by Cuauhtémoc Cárdenas, a politician who had left PRI to lead a left-wing coalition.  He was the son of former President Lázaro Cárdenas, one of the few 20th century Presidents who was genuinely respected. 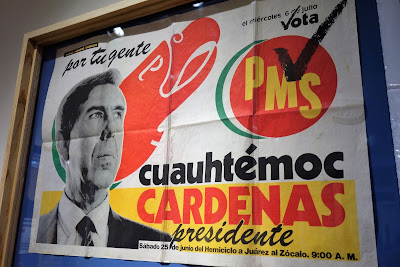 The official results showed Salinas de Gotari receiving  a scant 50% of the vote against 31% for Cárdenas.  It is widely believed that the election was stolen from Cárdenas, but even if there were no fraud, it was still remarkable that PRI would concede that many votes to the opposition parties.

In 1994 after the assassination of the PRI candidate Luis Donald Colosio, Ernest Zedillo was quickly chosen to run for PRI. 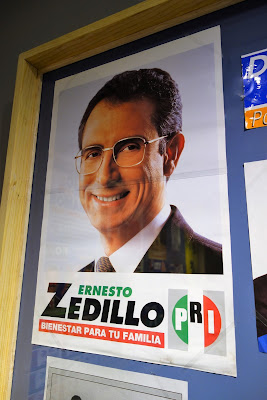 The official results gave PRI a plurality, but not a majority, with only 48% of the vote.  PAN came in second.  Cárdenas ran again but only got 16%.

In the year 2000 it all fell apart for PRI.  The PAN candidate, Vicente Fox won a plurality with 42% of the vote, and his coalition also won Congress.  PRI only got 31%.  Cárdenas gave it another try, but only got 16% again. 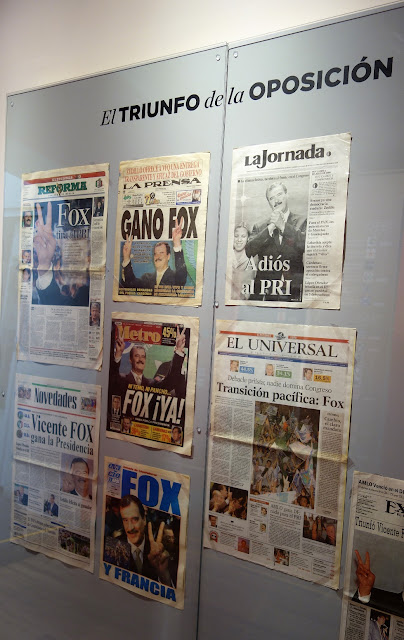 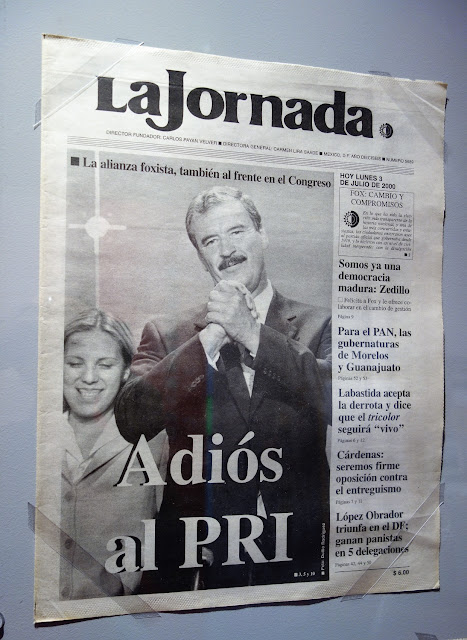 It was the first time that PRI had conceded defeat.  The peaceful transfer of power was a milestone in Mexican politics.

The year 2006 saw PAN continue in power but by the slimmest of pluralities.  PAN candidate Felipe Calderón won 35.91% of the vote against 35.29% for Andrés Manuel López Obrador.  Popularly known as AMLO, López Obrador is a left wing politician who was the popular mayor of Mexico City.  He contested the results, organized protests, and declared himself the legitimate President... all of which weakened his credibility. 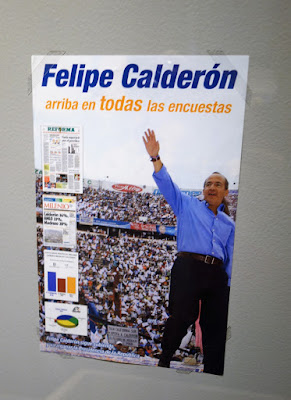 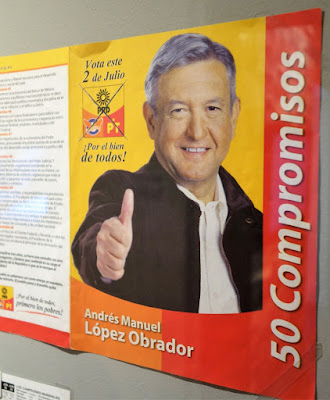 2012 saw PRI trying to make a comeback.  Candidate Enrique Peña Nieto said that his party was a new PRI free of the corruption of the past.  AMLO ran once again, and the PAN candidate, Josefina Vázquez was hoping to be Mexico´s first ¨Presidenta 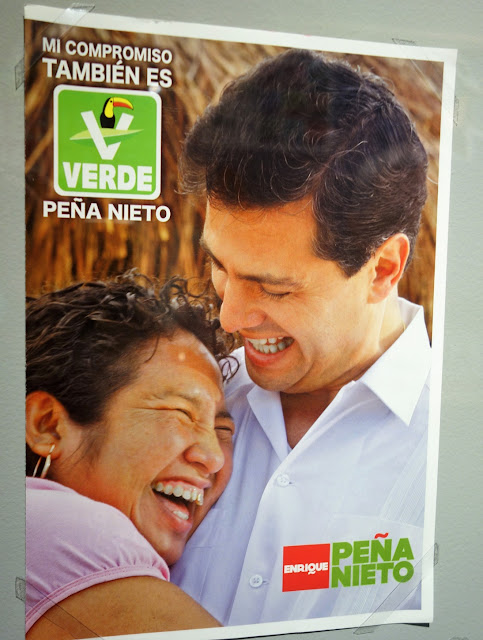 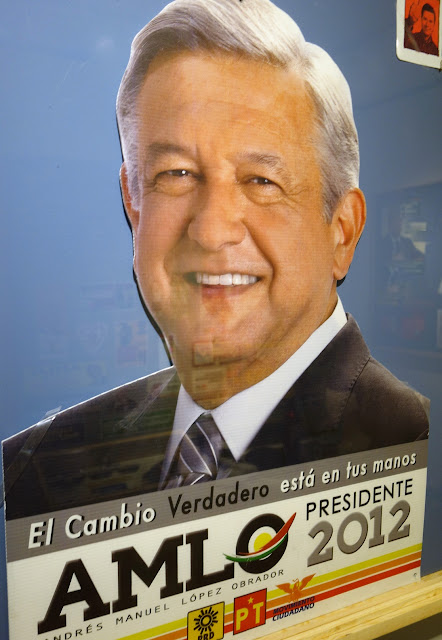 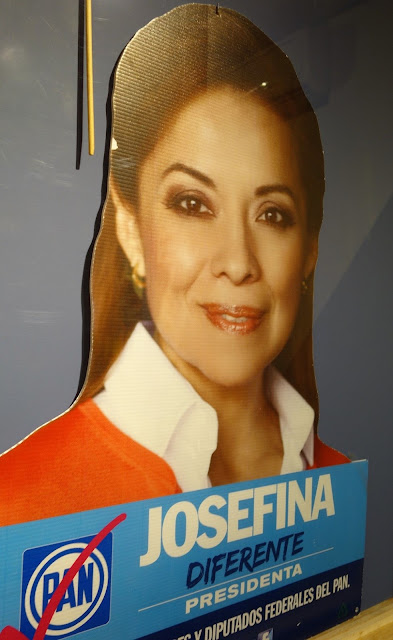 PRI won the election with 38% of the vote.  AMLO got 31%, and once again contested the election on the basis of irregularities.  (PRI was handing out gift cards to one of the major department stores during the campaign. No corruption in the new and improved PRI?  Yeah, right.)  PAN trailed with 25% of the vote.

Peña Nieto's administration has been plagued with corruption, and his popularity is abysmal.  As a result, PRI is running a distant third in this year´s polls.  Running for a third time is AMLO.  He has created a new party called "Morena", and he is leading in the polls.  It will be interesting to see what happens this year in July´s election.  Most certainly no one will receive a majority since besides the three major candidates there are two independent candidates this year.
Posted by Retired Teacher at 8:40:00 AM