Alejandro is not the only member of the family to be celebrating a birthday at this time.  On Saturday Alejandro's dad, his sister, his nephew and I piled into the car with him, and we went to celebrate the birthday of his Aunt Araceli.   Araceli and her husband Salvador are Alejandro's favorite aunt and uncle, and I really like them too.  I have been to their home with Alejandro on several occasions.  I finally have the names of their children and the children's spouses in my mind... but I still can't keep track of all the grandchildren and great-grandchildren.

We were supposed to be at "tía" Araceli's house at three, but first we had to find a gift for her.  We searched the mall, but it wasn't until we went to Sam's Club that we finally found a nice basket of bath soaps and lotions.  Then we headed back to Alejandro's family's house, but his sister was still getting ready.  So Alejandro and I went to the neighborhood market where he had the present very nicely gift wrapped.  (Yes, there is a stall in the market that does gift wrapping!)  We went back to the house to pick up the others, and it was after three o'clock before we hit the road.  Araceli and Salvador live on the other side of the city, so it was after four o'clock before we arrived.  In spite of being over an hour late, we were the first ones there.

We ate at six o'clock.  Salvador had made "carnitas" (chunks of pork) for the occasion.  He is from the state of Michoacán, and he prepares his "carnitas" in the Michoacán style.  He cooks the meat in lard (no one ever said that "carnitas" is a healthy dish) with oranges and various spices until the meat is tender.  Four kettles and serving dishes piled with meat were placed on the long table that had been set up.  All the fixings to make tacos were also set out. 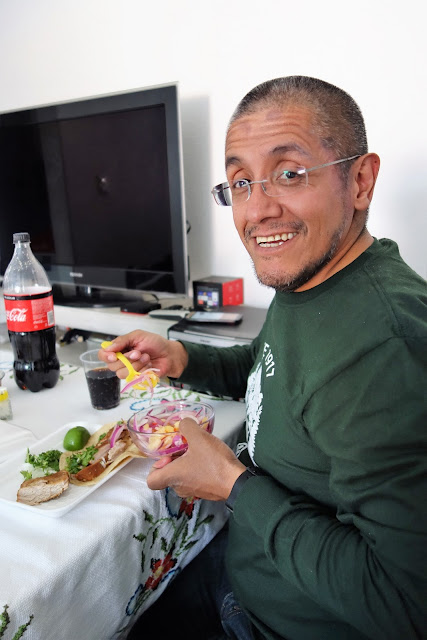 A chunk of meat is placed on a tortilla.  Lime juice is squeezed over it.  Then add some chopped cilantro and a good dollop of salsa and a sort of relish made with onion and pineapple.  Fold and eat!  Mmmmm... delicioso!

Alejandro and I both lost count of how many tacos we consumed.  Around ten o'clock we said our good byes and waddled out to the car.