The "Alebrijes" Are Returning!

If you have been reading this blog for a while you already know what "alebrijes" are, and you probably remember that one of the events of the Day of the Dead season in Mexico City is the "Desfile de Alebrijes Monumentales" (The Parade of Monumental "Alebrijes").

For any newcomers, an "alebrije" is a figure of a colorful, fantastical creature.  In Mexico City, where they originated, they are made of cardboard or papier-mache.  Later, artisans in the state of Oaxaca started carving them from wood.  They have become one of Mexico's best-known forms of popular art.

Mexico City's "alebrije" parade had been sponsored by the Museum of Popular Arts since 2007... long before the city started holding other parades and events designed to make Day of the Dead in Mexico City a tourist draw comparable to Mardi Gras in New Orleans or Carnaval in Rio.  The "alebrije" parade was usually held in October, two weekends before Day of the Dead (November 2nd).  It grew in size until more than two hundred entries, created by individual artists, workshops, or local organizations, were in the parade.  These "alebrijes" were large creatures, some as tall as thirteen feet high.  They were wheeled down the streets of downtown Mexico City.  After the parade, they were all displayed along the Paseo de la Reforma.  Cash prizes were given to the best entries.

Alejandro and I went to several of the parades.  Unlike the big Day of the Dead Parade, which was started in 2016 and which attracts more than a million spectators, the "alebrije parade" was relatively low-key.  We could go to the parade route less than an hour beforehand, find a good spot, and not be crushed by crowds.

Then the pandemic hit... and the season's events were all cancelled.  In 2021, even though the city resumed the big parade, there was no "alebrije parade". 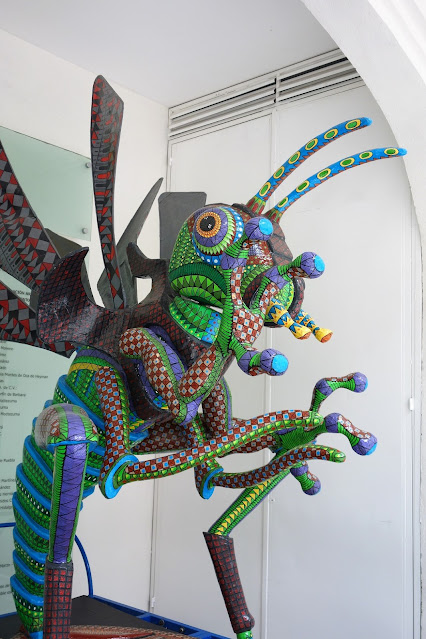 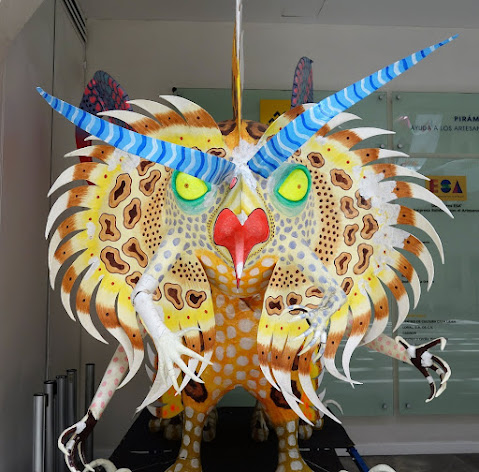 A couple of "alebrijes" from the last pre-pandemic parade, on display in the courtyard of the Museum of Popular Arts.

Then a few days ago, Alejandro told me that he had heard that the parade would be held again this year.   I went on the internet and found a couple of new articles confirming what he had heard.  And now the museum's website has the announcement.

The parade will be held on Saturday, October 22nd.  It will leave the Zócalo at noon, head through the Historic Center of the city and make its way down the Paseo de la Reforma to the Independence Monument.  The "alebrijes" will be on display along the boulevard until November 6th.

I am very pleased that this delightful event is returning, and I intend to be along the parade route on October 22nd!