It's time to turn the page on the calendar.  My calendar is one that I had custom-made.  It features photos that I have taken on my travels of parks and gardens from around the world.  June's picture is a photo of the Jardín del Príncipe (Prince's Garden) in Aranjuez, Spain. 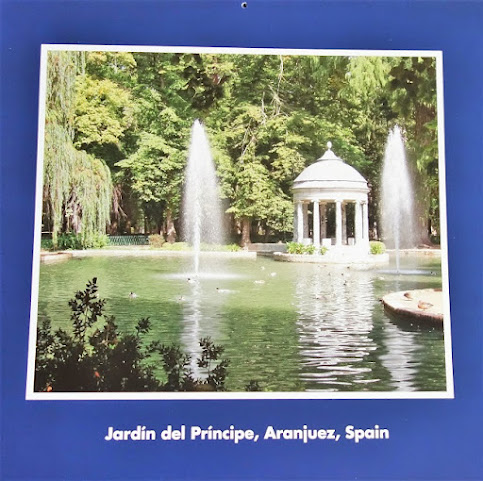 Aranjuez is a city located about thirty minutes to the south of Madrid.  On one of my trips to Spain I took a day's excursion there.  Aranjuez is the site of a royal palace that was built in the 16th century and extensively redesigned in the 18th century.  There are numerous gardens which are open to the public, but which originally were for the exclusive enjoyment of royalty.  The Prince's Garden is one of those.  It was begun in 1789 when Charles IV was still the crown prince.

Classical music lovers might be familiar with the "Concierto de Aranjuez", a guitar concerto by Joaquín Rodrigo.  It is probably the best-known classical guitar piece ever written.  The composition was inspired by the gardens of Aranjuez.  The exquisitely beautiful second movement is one of my favorite works of Spanish music.  You can enjoy a performance of it HERE.