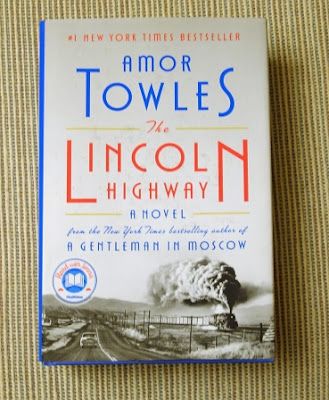 I just finished reading a novel that my friend Carol had given me the last time that we exchanged books... "The Lincoln Highway" by Amor Towles.

The story takes place in the 1950s.  Eighteen-year-old Emmett Watson has served time at a juvenile detention facility for involuntary manslaughter.  He is released early because of the death of his father.  He returns to the Nebraska farm where he grew up and is reunited with his eight-year-old brother Billy.  The farm has been repossessed by the bank, and Emmett and Billy decide to make a new life for themselves by heading west to California along the Lincoln Highway, the nation's first transcontinental highway.  Billy is hoping that they can find their mother, who, years before, had abandoned the family and moved to San Francisco.  Emmett's dreams are more realistic... he hopes to use his carpentry skills to renovate houses.

Their plans to head west, however, are derailed by the appearance of a couple Emmett's companions from the detention facility.  They make a ten-day journey that is much different from what they had planned.

The book is filled with a cast of colorful characters and unexpected events.  I thoroughly enjoyed the book, and I recommend it.

Email ThisBlogThis!Share to TwitterShare to FacebookShare to Pinterest
Labels: books