The "Glorieta de Insurgentes" has long been a hub of activity in Mexico City. It is a large circular plaza below street level within the intersection of Insurgentes Avenue and Chapultepec Avenue.

The Glorieta was built in 1969 as the site of the Insurgentes subway station.  More recently it became an important stop on Line 1 of the Metrobus system.  The plaza is located at the edge of the Zona Rosa, which was one of the most fashionable shopping, dining and nightlife districts in the city.  As the luster faded from the Zona Rosa, the Glorieta also became more tacky.

Last year a renovation of the Glorieta was begun.  The subway station remained open throughout the construction, but the Metrobus stops were temporarily closed. Although there are still some finishing touches to be done, the project is for the most part completed.  Last Thursday I passed through the plaza to take the bus back to my apartment, and I had my first look at the changes. 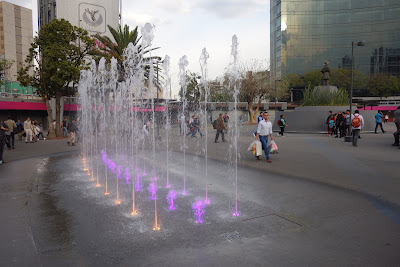 There are several of the CDMX sculptures (the official abbreviation of the city). 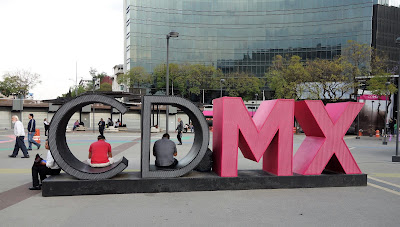 Benches with canopies have been placed around the plaza. 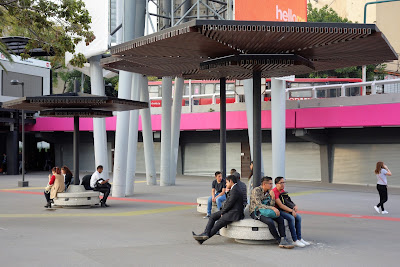 All around the perimeter of the circle there were stalls for small businesses.  As you can see in the above picture, those stalls have not been opened yet.  The old shops were quite junky.  If the old businesses return, I would hope that they are more attractive and better maintained.

All across the pavement of the plaza there are decorative, metal plaques with the names of all the subway stations in the city. 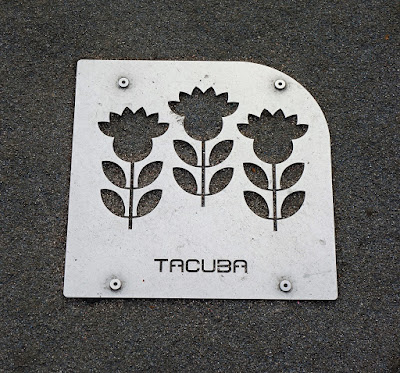 All in all, the renovated Glorieta looks much nicer.
Posted by Retired Teacher at 10:22:00 AM