Is Trendiness Setting In?

The Mexico City district known as "Roma" is actually divided into two "colonias" (neighborhoods)... "Roma Norte" (North Roma) and "Roma Sur" (South Roma).  All of "Roma" in the early 1900s was very fashionable.  Well-to-do families wishing to escape the city center built elegant homes here.  As newer neighborhoods farther out became the "in" spots, and especially after the devastation of the 1985 earthquake, "Roma" fell into decline.

Then in recent years, "Roma Norte" suddenly became gentrified.  With its exploding number of art galleries and even greater number of new restaurants of all kinds, it became a hip neighborhood with the trendy residents of the city.  And it started to attract foreign tourists as well.  I actually read one article that called "Roma Norte" the world's best destination for foodies.  That's probably an exaggeration, but it would definitely take visitors months to eat their way through the neighborhood's eateries.

"Roma Sur" on the other hand was the dowdy sister.  It is the center of the South American and Caribbean immigrant community in Mexico City, and it is more working class than hipster.  However, yesterday as I was walking through the heart of "Roma Sur" along Medellin Avenue, I saw some indications that some of the culinary trendiness may be infiltrating from the northern sister. 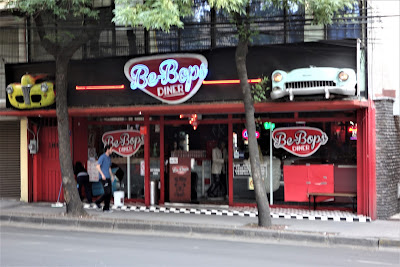 I had seen this place previously.  The "Be Bop Diner" serves U.S. diner food.  Such places tend to be expensive by Mexican standards and attract a young, moneyed crowd.

Many times I have passed a nondescript Colombian restaurant called "Pollos Mario".  Now it is closed for renovation, and from the looks of the picture on the banner, they are going for a picturesque look with a red tiled roof and wooden balconies.  Are they hoping to attract a more upscale crowd?  Perhaps some foreign tourists? 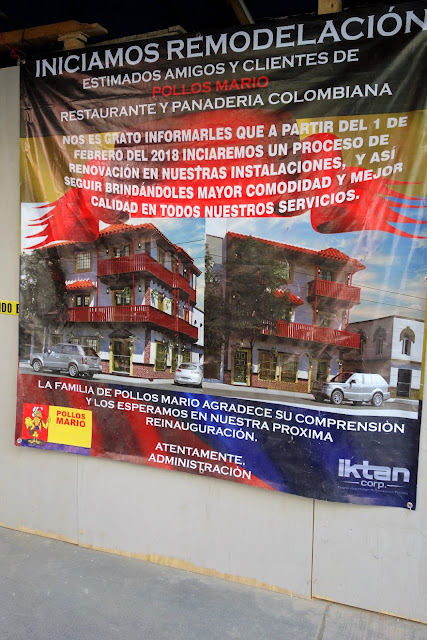 The biggest shock was this new establishment right across the street from the very traditional Medellin Market.  It's called "Comedor de los Milagros" (Dining Room of the Miracles), and, as far as I could tell, it would be best described as a trendy food court. 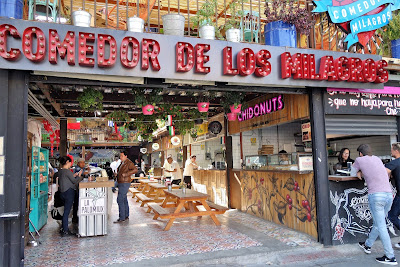 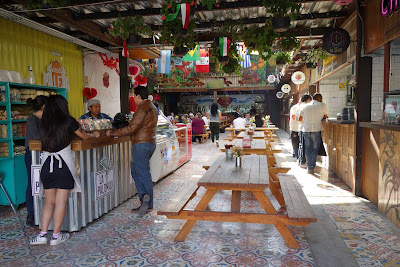 I didn't enter, but from the sidewalk I could see that there were a variety of food stands around an open courtyard.  By the entrance there was a gourmet popcorn stand.  The donut stand was called "Chidonuts"... combining donut with the word "chido", Mexican slang for "cool".  I could also see a taco stand and one specializing in Colombian food.  There were numerous others farther inside, and it looked as if there was a full bar at the back.  It is definitely a venue that screams "Roma Norte" rather than "Roma Sur".