Readers of my blog may have noticed that no matter how many photos I take of Mexico City's main square, the Zócalo, I cannot resist taking more each time I pass through the vast plaza.  And that is especially true when it's sunny, and the square is not cluttered with some sort of exposition.  That was the case yesterday afternoon. 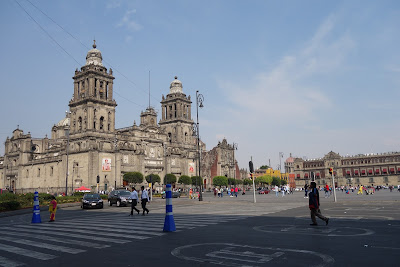 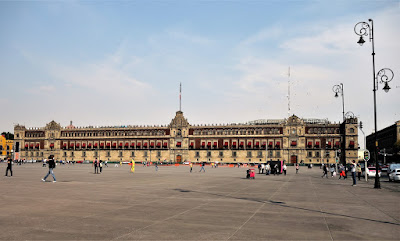 The National Palace, which houses the offices of the President of Mexico 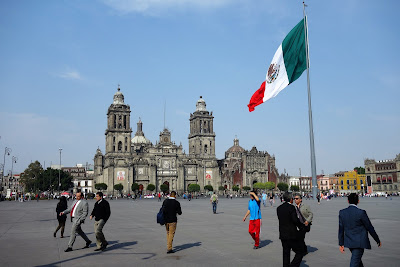 The Metropolitan Cathedral of Mexico, the largest cathedral in the Americas

Just a couple days before, a ceremony in the Cathedral marked the retirement of the Archbishop of Mexico City and the installation of the new archbishop.

A poster beneath one of the bell towers says "thank you" to outgoing Cardinal Norberto Rivera Carrera who had been the archbishop since 1995. 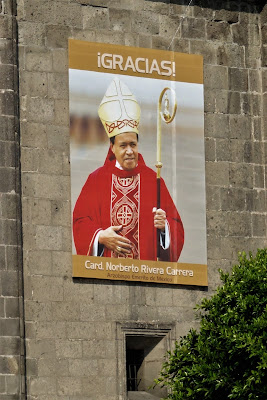 I will not delve deeply here into Church politics, but Rivera Carrera's arch-conservatism gained him numerous critics, as did his statement that coverage of sexual abuse among the clergy was an "orchestrated plan for striking at the prestige of the Church."

The new archbishop, Cardinal Carlos Aguilar Retes, is welcomed with a banner under the other bell tower. 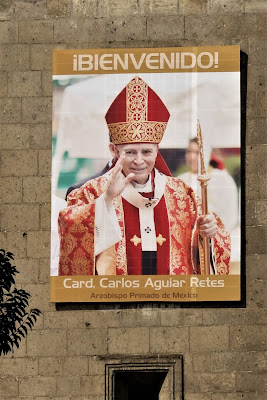 Just as in many other gathering places throughout the city, there is a sculpture of the letters "CDMX", the abbreviation for Ciudad de México... Mexico City.

It is a popular spot for visitors and residents to have their pictures taken.  I waited and waited until I was finally able to get a photo without people standing in front of it.  However, if you look very closely, you might be able to see that there is a man taking a siesta within the letter "C"!

Last year the plaza was repaved and its drainage system improved.  One addition that was made at that time is a large metal circle that is imbedded in the pavement.  Inscribed on the metal is the story of how the plaza came to be called the Zócalo. 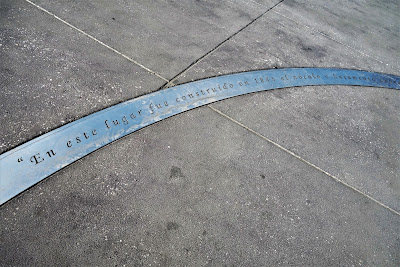 The inscription says that within the circle once stood the base ("zócalo") for a proposed monument to Mexico's independence.  The monument was never built, but the base stood there for decades.  Thus the plaza was nicknamed the Zócalo.  Not only did the nickname stick, but now the town squares in many other Mexican cities are called the Zócalo too.

The official name of the square is the "Plaza de la Constitución".  Oddly enough that name does not refer to any of the constitutions of the Mexican Republic.  It received that name late in the colonial period in honor of Spain's Constitution of 1812.