This summer, Mexicans will go to the polls to vote for a new President.  Something new in this year's election is that independent candidates will be allowed to run.  In order to appear on the ballot a candidate must gather over 800,000 signatures, one percent of the country's electorate.  Three candidates have so far garnered the necessary signatures.  However, people are suspicious of how "independent" some of them really are.

One of the independents is Margarita Zavala, the wife of former President Felipe Calderón.  When she was unsuccessful in gaining the nomination of her husband´s conservative PAN party, she resigned from the party and took the "independent" route.  She hopes to be Mexico's first woman President, but her candidacy may simply result in splitting the conservative vote.

Another very different woman is attracting a lot of attention, even though she probably won't succeed in getting on the ballot.  María de Jesús Patricio Martínez, popularly referred to as Marichuy, aspires to be not just the first woman President, but the first indigenous female President.

During my recent trip to Mexico City, I saw tables set up in a couple different locations, where volunteers were collecting signatures for her. 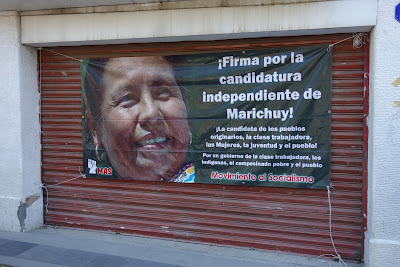 Marichuy is a Nahua (Aztec) speaking woman who is endorsed by the National Indigenous Congress and the Zapatistas, the revolutionary group based in the state of Chiapas that rebelled against the government in 1994.  I admire her desire to become the first native woman President, but her politics are much too far to the left.  Mexican politics definitely needs to be shaken up, but I certainly do not want to see the nation go the route of another Cuba or Venezuela.