After dining at the Mayordomo restaurant yesterday afternoon, I headed north up Isabel la Católica Street toward the center of Mexico City's historic district.  Isabel la Católica is graced with a number of impressive old buildings.  I have passed them a number of times without knowing much about them, but thanks to the internet, I have done a bit of research about their histories.

Unlike many old buildings which have deteriorated or been abandoned, this grand structure has been under restoration for at least a year.  I have often wondered about its history. 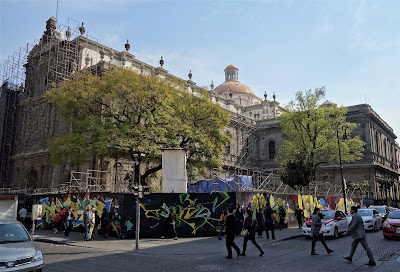 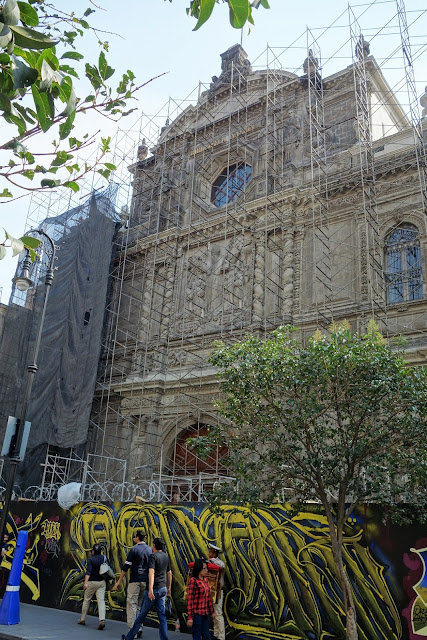 I read that it was originally an Augustinian church and monastery.  The Reform Laws of President Benito Juárez expropriated church property, and in 1867 he had the National Library of Mexico move into former monastery.  Even after the the National Library moved to new facilities in 1979, this building continued to contain the "Fondo Reservado", around 200,000 of the most valuable items in the library's collection, including the first books printed in Mexico.  The building suffered serious damage in the 1985 earthquake.  It will be interesting to see what use the building will have when the restoration is complete.

A block away is this colonial palace. 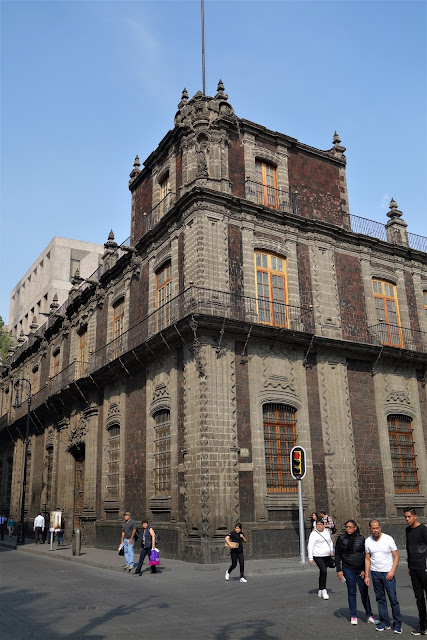 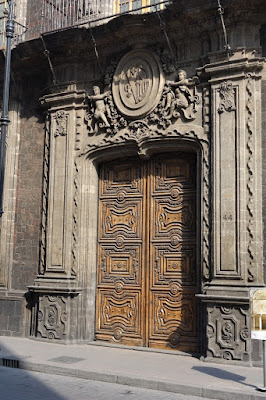 A plaque on the corner says that it was constructed between 1769 and 1772 and that it was the home of the Counts of San Mateo Valparaiso.  The structure is well maintained, but there is no indication of what its current use is.  I found out that after the last of the counts' descendants died, the building was purchased in 1883 by the Bank of Mexico (today Banamex).  Banamex still maintains offices here, and the building is not accessible to the public.

This building known as the Casa Boker was built in 1900. 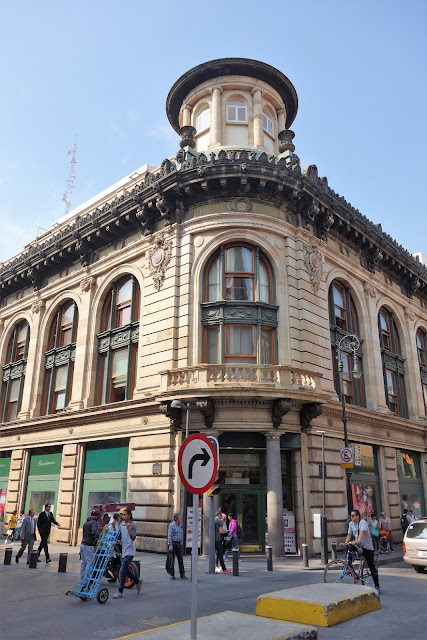 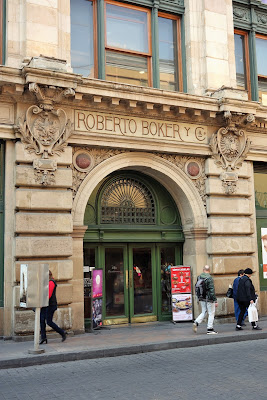 Roberto Boker was a German-born entrepreneur who eventually established his import-export business in Mexico City.  A portion of this building is still a hardware store owned by Boker's descendants, and part of it is rented out to Sanborns, the Mexican restaurant chain.

Another block up the street is this ornate building, the Casino Español, which was built in 1903. 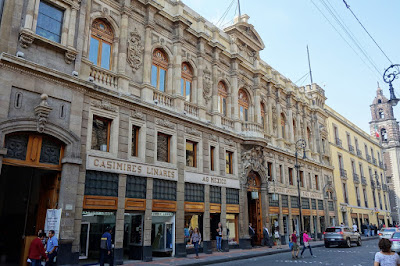 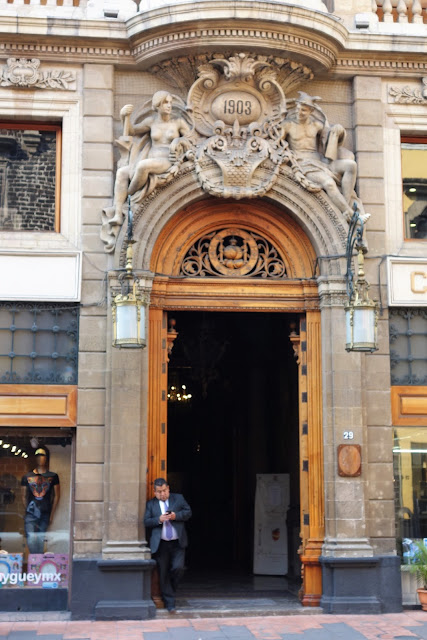 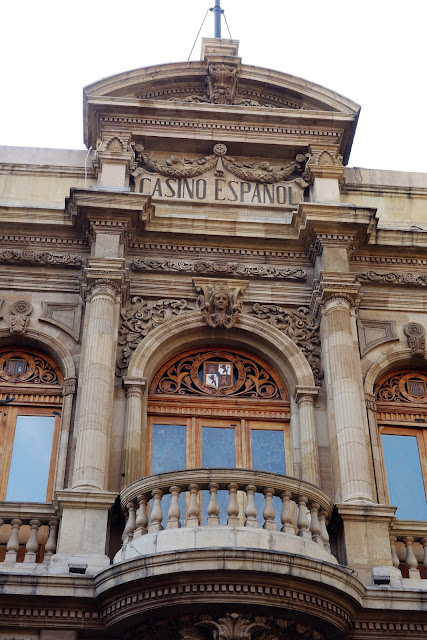 It began as a social center for the Spanish community in Mexico City, and is now an elegant Spanish restaurant.

The last building on our tour is this church which is on the corner of Isabel la Católica and Madero, the pedestrianized street which is the heart of the Centro Histórico. 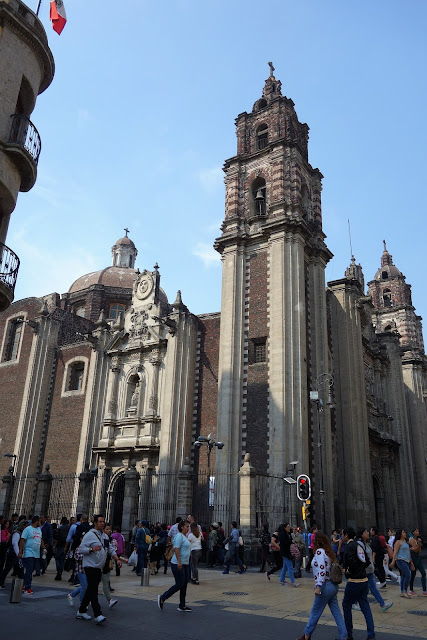 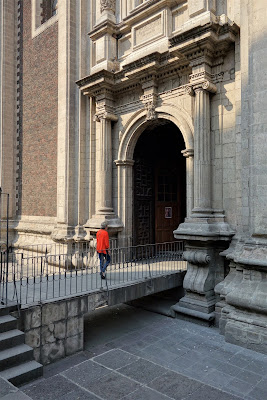 Like many structures in the city´s center, this church has sunk several feet into the former lake bottom upon which much of Mexico City is built. 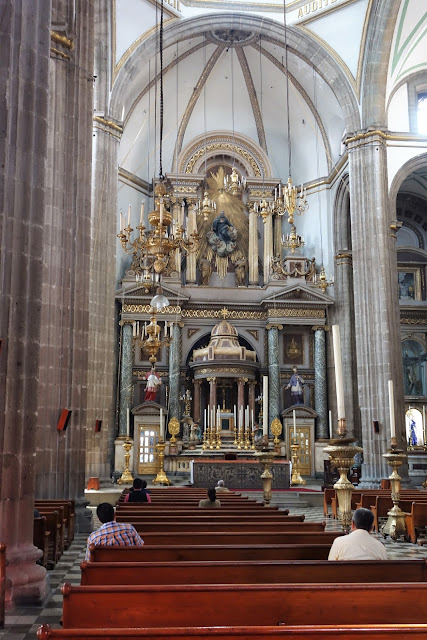 The Baroque main altar was replaced in 1800 with a neo-classical design created by Manuel Tolsá, the Spanish-born architect, sculptor and engineer who left his mark upon the city during the late colonial period.