Mexico City is served by twelve Metro (subway) lines and six (soon to be seven) Metrobus routes.  While at certain hours they are jammed with passengers, they are generally quite efficient means of public transportation.

However around sixty percent of the people in Mexico City using public transport rely on the 28,000 little buses known as "peseros"... vehicles which Alejandro calls the worst! 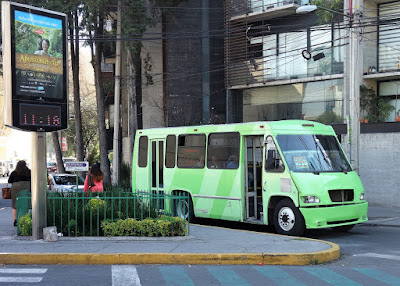 "Peseros" got their name from the fact that the fare used to be one peso.  Now it generally costs between four and five pesos to ride a "pesero".  The bus driver gets to keep all the fares he collects over the daily quota which goes to the vehicle owner.  As a result, the drivers are always in a hurry to make as many runs and to carry as many passengers as possible.  I have witnessed "peseros" running red lights a number of times.  On the other hand, the fact that the buses are constantly stopping to pick up or drop off passengers anywhere along the street adds to the traffic chaos.  The "peseros" also contribute to the city's noise pollution.  The drivers love to lay on their horns whenever the traffic in front of them is not moving fast enough to suit them.  And, believe me, those little buses have horns that are louder than any big truck.

What is most scary is that there is no regulation of these buses.  Many of the vehicles are poorly maintained, and there is no criteria for the hiring of drivers.  The buses are notorious for causing accidents... sometimes fatal accidents.  (The driver usually runs away from the scene of the accident, never to be seen again.)  Until the city government takes some action, regulating the "peseros" or providing better public transport options, those little buses will continue to be a blight on the city.
Posted by Retired Teacher at 8:55:00 AM