Into the Woods (Part One)

Chapultepec is Mexico City's most famous park, but it is not called a "parque".  It is "el Bosque de Chapultepec"... the Forest of Chapultepec.  Indeed, since Aztec times this area has been a woodland.  With over 1600 acres, it is one of the largest city parks in the Western Hemisphere, and it is considered the "lungs" of the city. 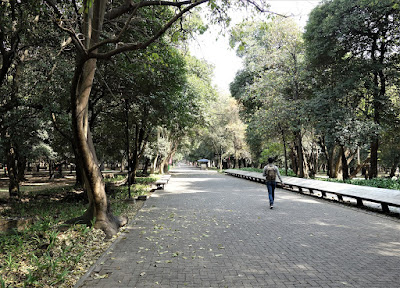 The park is divided into three sections.  The first, which contains the zoo and some of the city's most famous museums, is the most visited.  The second section contains an amusement park, and some minor museums.  The third section, the least visited, is largely undeveloped.  I have read that there have been incidents in which people have been attacked by feral dogs there, so that part of the park is not on my list of places to visit.

I have written numerous entries about the first section and its museums, and last August I wrote about the second section of the park.  However, I think that, for the most part, this entry and the next will present to you some views of the park that I have not shared with you previously.

Last Wednesday I took a long walk through the first section of the park.  I didn't go to any of the museums.  I just wandered the many paths that traverse the forest.  I even found some corners of the park that I had never seen before.

Being a weekday, the park was not as crowded as it is on weekends.  Nevertheless, many of the vendors were set up along the main path selling their snacks and souvenirs. 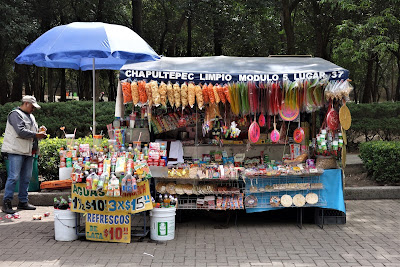 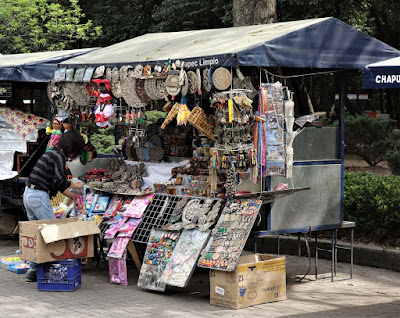 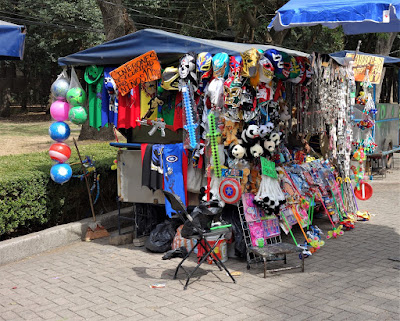 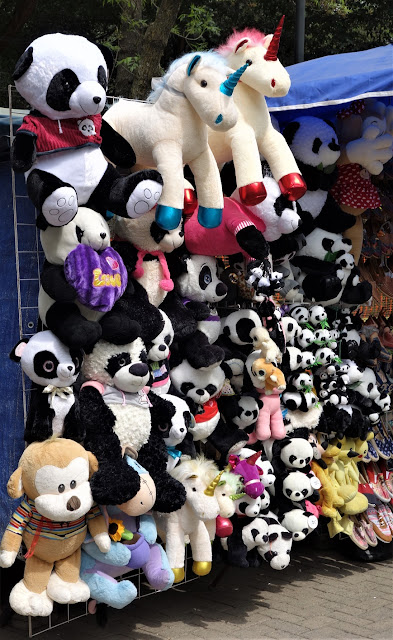 Stuffed panda bears are popular souvenirs since the pandas are among biggest attractions at the zoo in Chapultepec Park. 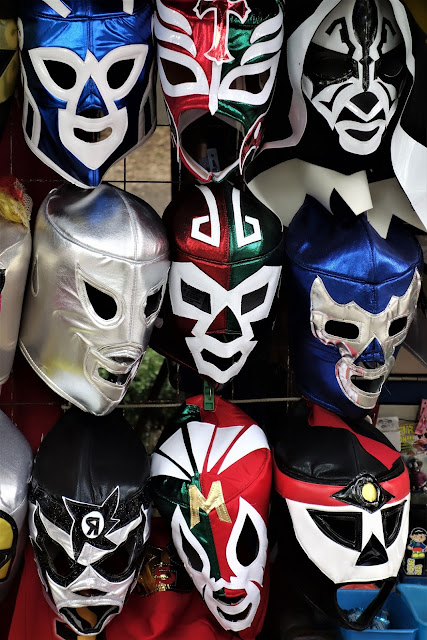 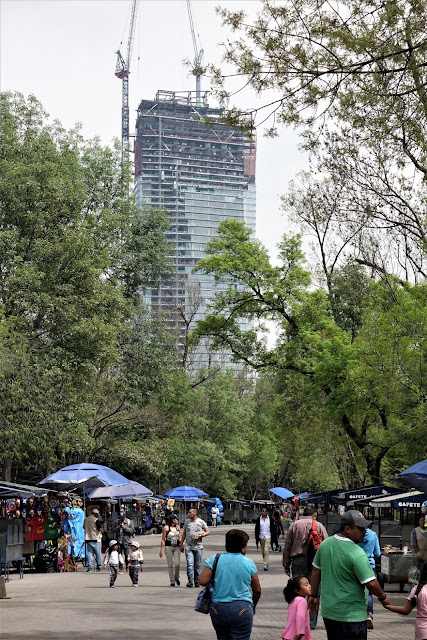 The new office tower, Chapultepec Uno, still under construction, looms over the park.

Chapultepec was a sacred place to the Aztecs.  The emperors had their images carved on the cliff of Chapultepec Hill.  After the conquest the Spaniards destroyed those images.  If you venture off the main path, you can observe the traces that remain of the carving of Moctezuma (Montezuma). 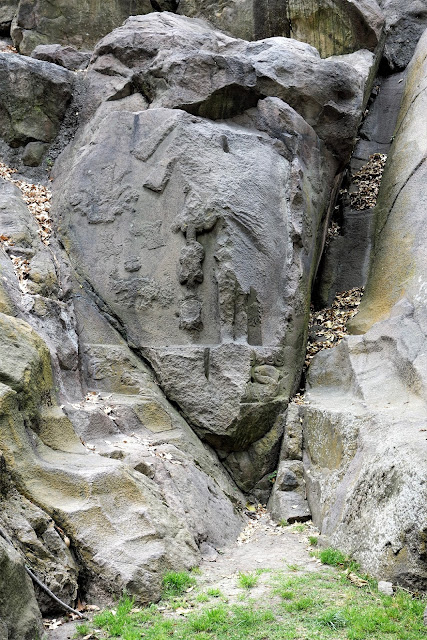 Continuing along the path around Chapultepec Hill I came to this pretty fountain called "La Fuente de la Templanza" (The Fountain of Temperance).  Although it looks as if it could date from the 18th century, it was actually built in 1931. 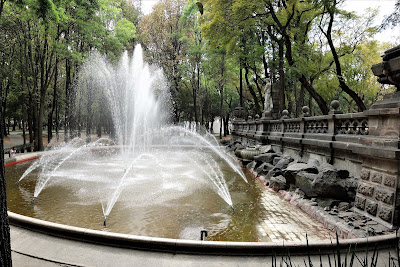 Behind the fountain is what remains of one of the oldest trees in the park.  It is an "ahuehuete" or water cypress.  According to tradition is was planted in 1460 by Nezahualcoyotl, the King of Texcoco.  The Aztec emperor is said to have invited his ally Nezahualcoyotl to plant cypress trees in Chapultepec.  The tree lived to be around 500 years old, until it died in the mid-20th century due to pollution and lack of water. 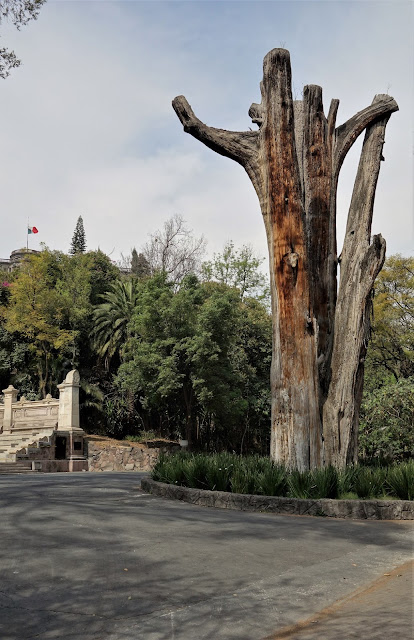 To the left you can make out the Mexican flag flying over Chapultepec Castle on top of the hill.

Beyond the remains of the cypress tree is a monument commemorating the Mexican Expeditionary Air Force, the only Mexican military unit to ever fight outside of Mexico.  During World War II the unit trained in the United States, and then flew 59 missions over the Philippines, helping to liberate those islands from Japanese occupation. 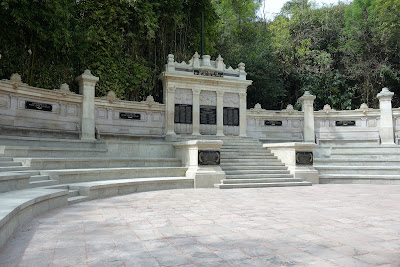 Tucked away in a secluded corner behind the monument is a spot which I had never seen before on all my ramblings through the park.  It is a place called the Audiorama.  Speakers situated around the area play classical music, and visitors are asked to be quiet. 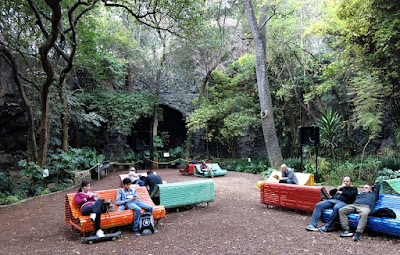 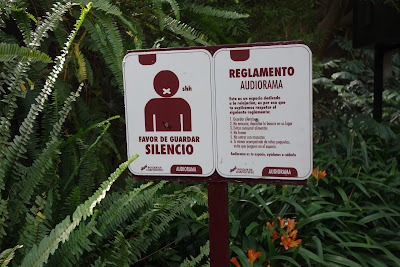 It is a peaceful spot where you can relax, read, and unwind from the stress of the city.  There is even a table of books from which you can borrow reading material. 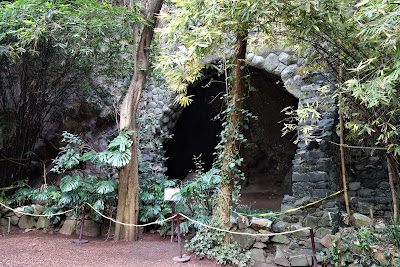 At the far end of the area there is a small cave in the cliff of Chapultepec Hill.  According to Aztec myth it was the entrance to the Land of the Dead. 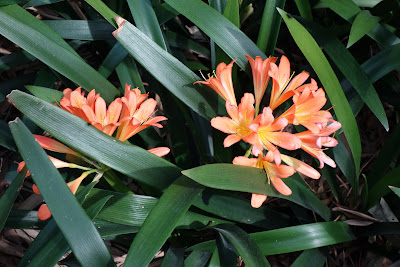 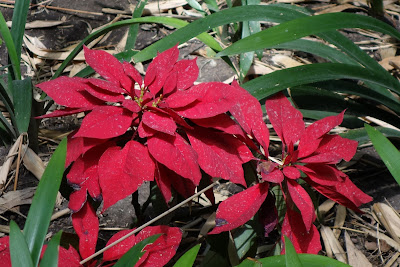 Plantings of flowers add to the beauty of the spot.

My hike through the forest of Chapultepec is not over.