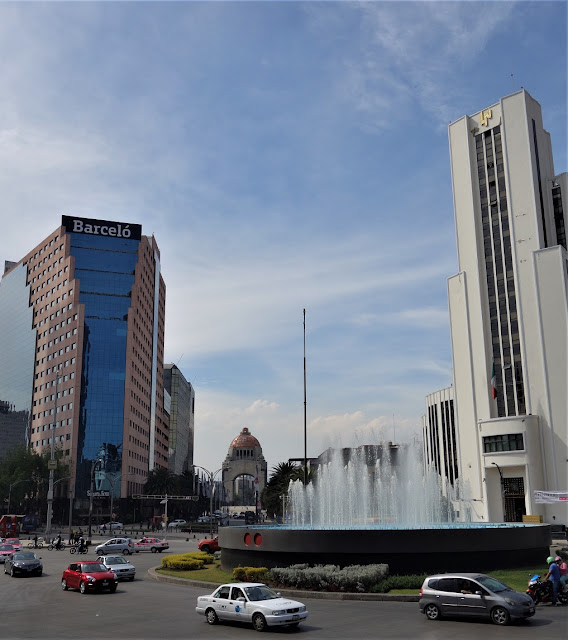 When I reached the intersection of Juárez Avenue and the Paseo de la Reforma, the city's most famous boulevard, I decided to turn down Reforma and see if there was anything new since my last visit.

One thing that is new is the construction of a new Metrobus line along Reforma.  This will be the seventh Metrobus route, and, unlike the others, this one will be served by double-decker buses.  The bus stops have already been built along the boulevard. 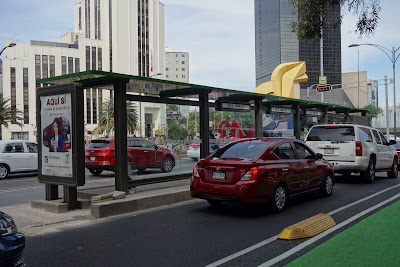 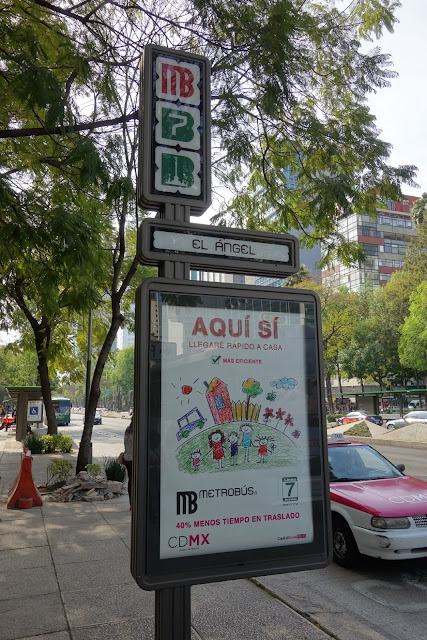 There was vocal opposition to this Metrobus route.  Some said that it would change the nature of the historic boulevard... an argument that I find ridiculous since the Reforma is changing constantly with the construction of new skyscrapers.

Another change is the addition of a bike lane along much of the boulevard. 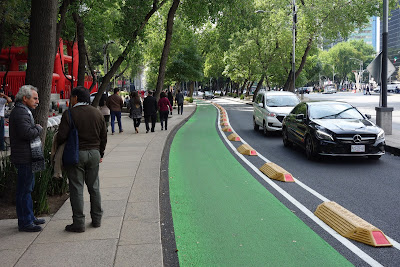 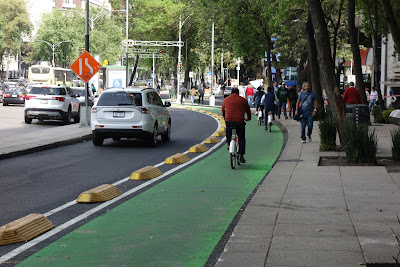 Of course there is much that is still the same.  Christopher Columbus still stands atop his monument looking as if he were trying to hail a taxi at the busy intersection. 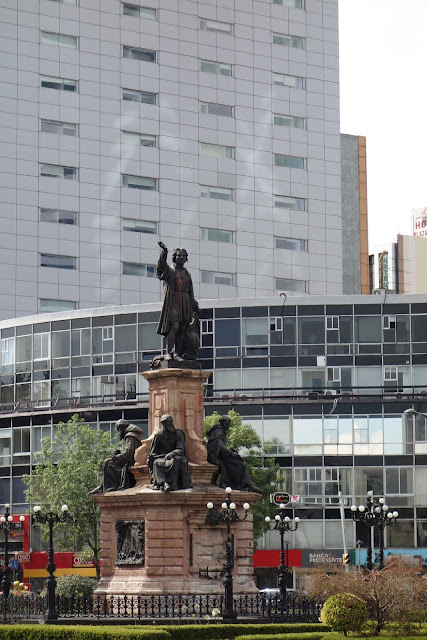 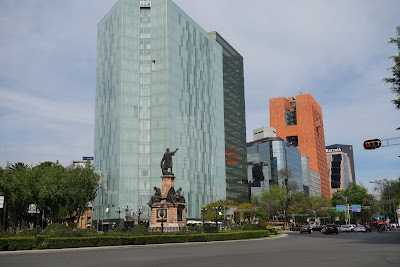 And there is still the graffiti denouncing the disappearance of the 43 students in 2014. 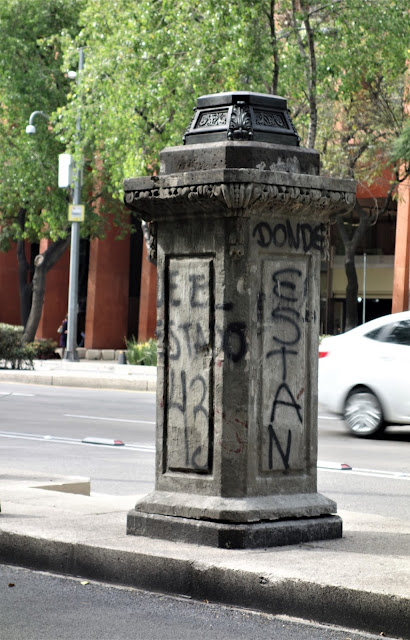 Once upon a time, the Reforma was lined with elegant buildings from the late 19th and early 20th centuries.  Very few of those buildings still stand. 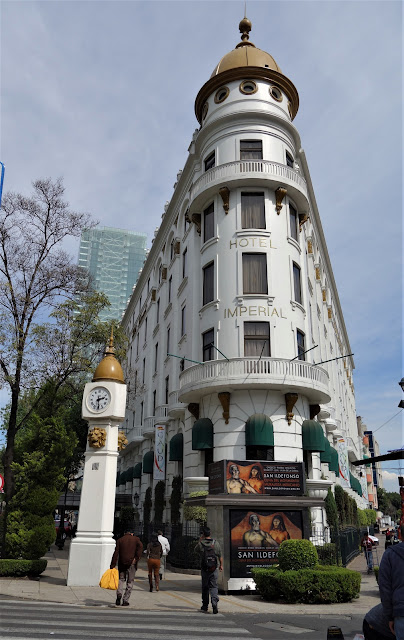 The construction of new high-rise buildings continues.  I had not noticed this nearly completed structure previously. 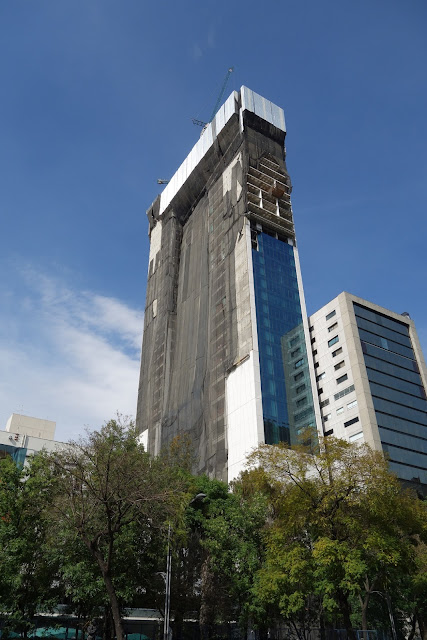 It is located right next to the U.S. Embassy, and I wondered if it were a grandiose annex to the embassy.  But upon closer inspection, I found out that it will be a new hotel.

Some random shots along the Reforma... 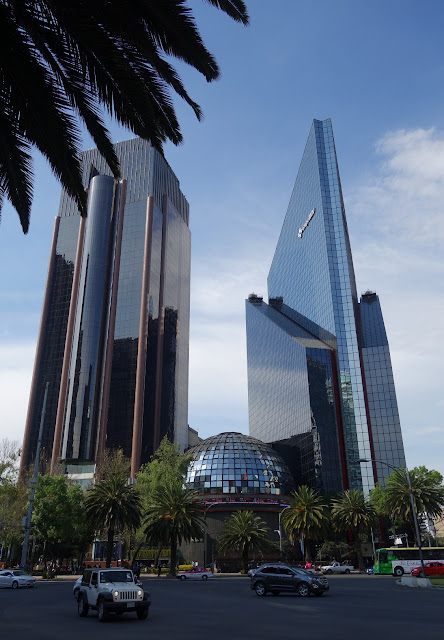 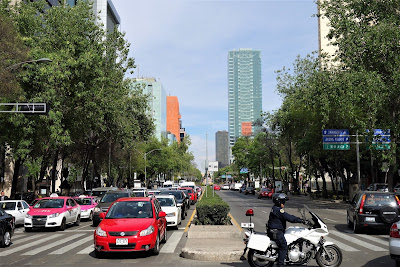 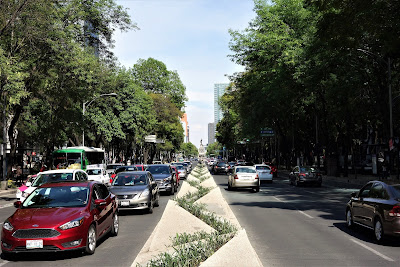 I can never walk along the Reforma without taking some pictures of the iconic Monument to Independence... "El Angel".  Here it is from a different angle. 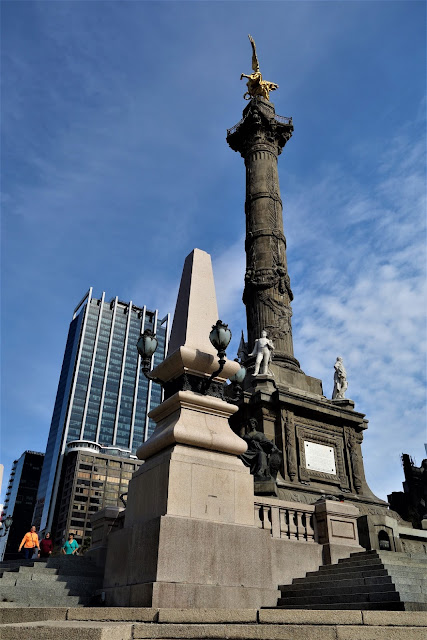 The fountain of Diana the Huntress has been a part of the Reforma since 1942.  It was originally located near the entrance to Chapultepec Park.  (That's where I remember it from my first visit to Mexico.)  In 1992 it was moved to its current location at the intersection with Sevilla Street.

The nude statue aroused the indignation from the ultra conservative "Decency League", and in 1943 it forced the sculptor to put bronze panties on Diana.  The sculptor, hoping to someday be able to remove the panties, attached them with only three welding points.  Nevertheless, when the panties were finally removed in 1968, there was some damage to the sculpture, and a brand new Diana was cast from the original mold.

The shimmering Torre Diana is perhaps my favorite of the new buildings constructed along the Reforma.  It houses offices for a number of international firms including AT&T. 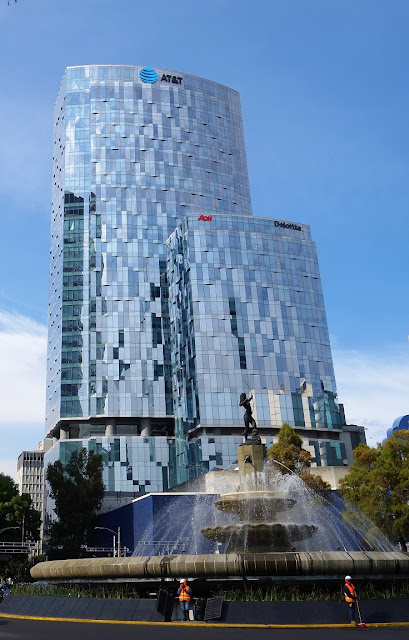 "49ABC" and next to it a plaque saying "Nunca Más" (Never Again)
I had no idea what meaning behind this sculpture was.  I did some research and discovered it commemorates a tragedy that occurred in 2009 when 49 children died in a fire at the ABC Day Care Center in Hermosillo, Mexico. 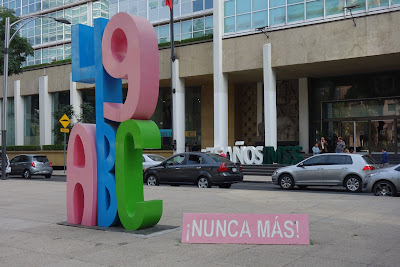 This rather bizarre piece of sculpture in front of the Mexican Social Security headquarters is entitled "The Angel of Social Security", and celebrates the 70th anniversary of that government agency. 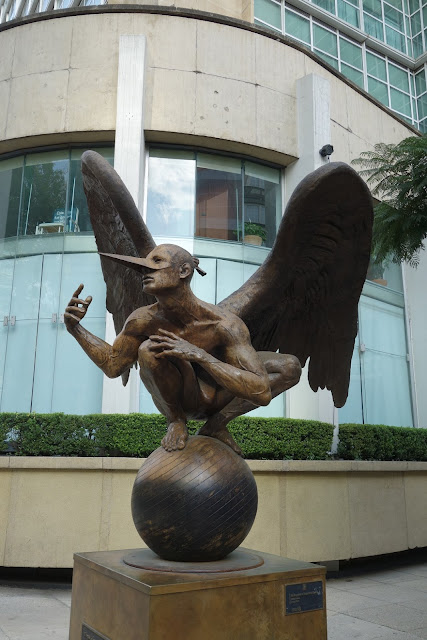 By now I had reached that section of Reforma near the entrance to Chapultepec Park that in recent years has been a hub of skyscraper construction.  The newest structure, Chapultepec Uno, is nearing completion, and in this photo appears to be attached to the Torre Mayor (to the right), which used to be the tallest building in Mexico. 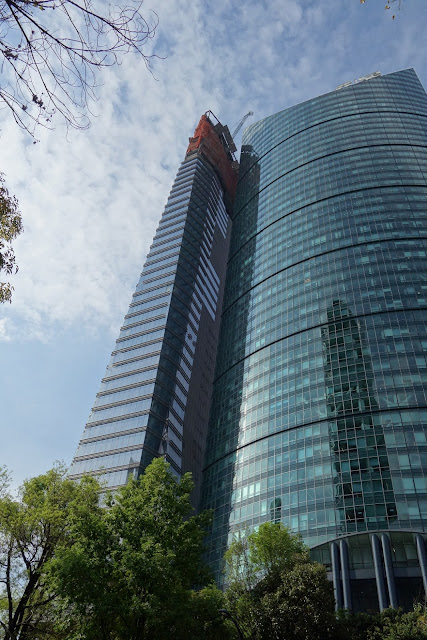 Chapultepec Uno will be completed next year.  At 771 feet tall, it will be the third tallest building in the city. It will contain offices, residences, and a Ritz Carlton Hotel. 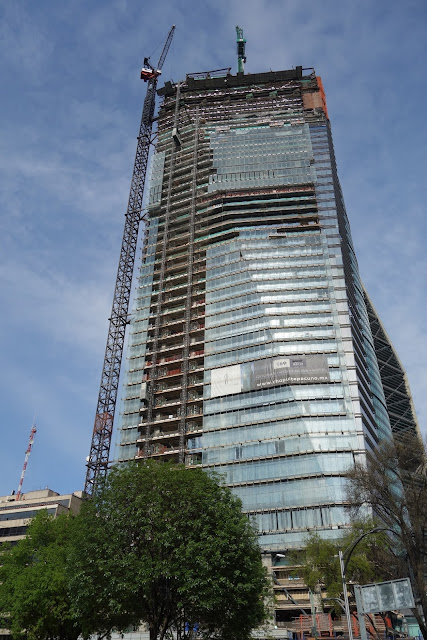 Here Chapultepec Uno, the Torre Mayor, and, behind it, the Torre Reforma seem to merge into one massive structure. 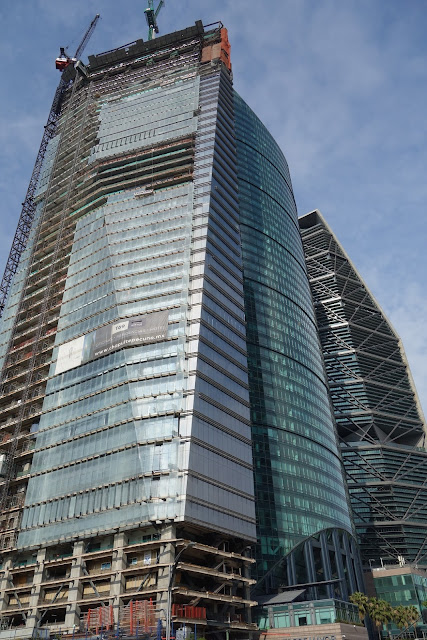 The Torre Reforma, with a height of 807 feet, is currently the tallest building in the city. 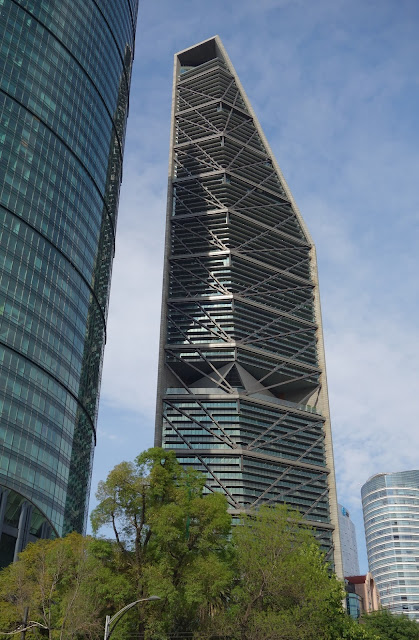 I do not care for the style of the building.  This side looks unfinished to me.  And the other side is an ugly expanse of concrete.

Right across the street is the Torre Bancomer.  It is for the moment, the second tallest building in Mexico City.  I am not fond of its style either. 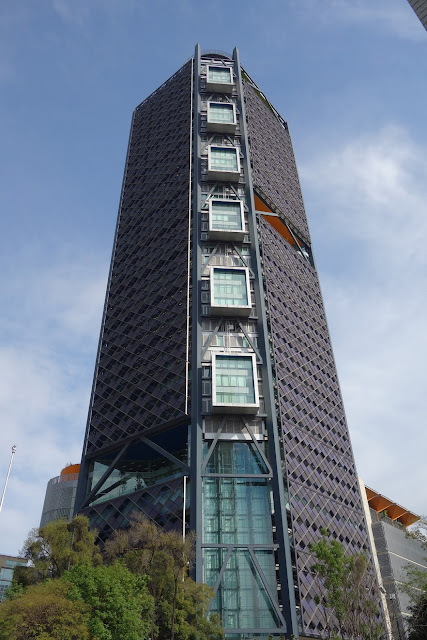 Looking down Reforma toward the Polanco neighborhood, I could see more buildings under construction.  However it was now late afternoon, and time for me to eat and head back to the apartment. 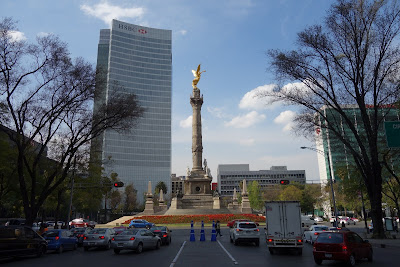