Into the Woods (Part Two)

Continuing my exploration of Mexico City's most famous park... the Forest of Chapultepec...

By this time I was to the west of Chapultepec Hill, away from the areas of the park that most tourists visit.  I came upon a totem pole which had been presented as a gift from the Canadian government on the 150th anniversary of Mexico's independence. 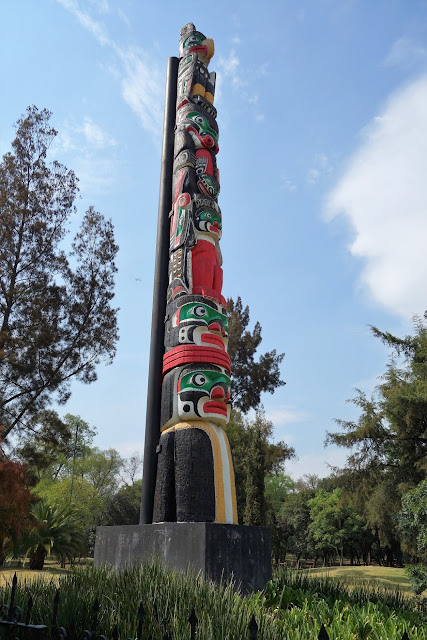 A short walk to the north led me to the very impressive Fountain of Nezahualcoyotl. 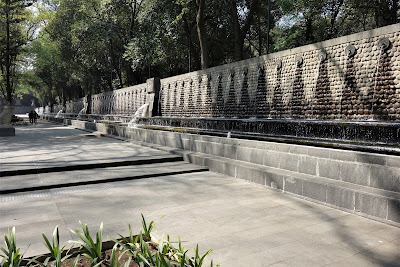 Nezahualcoyotl was the King of Texcoco, a city which was closely allied with the Aztecs.  In addition to ruling as king, he was a philosopher, poet, architect, and engineer.  In the previous post I mentioned that Nezahualcoyotl is said to have planted cypress trees in the forest of Chapultepec.  He also designed an aqueduct to carry potable water from the springs at Chapultepec Hill to the Aztec capital.  So it is fitting that he should be honored here in the park with this fountain. 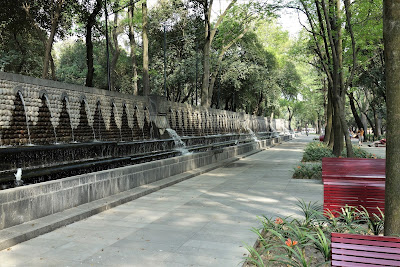 The fountain is at least 100 feet long.  All along it are carvings which depict the life of the famous king. 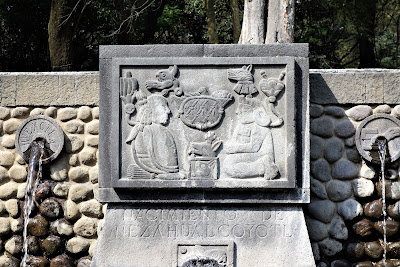 At the end of the fountain is a massive wall and platform with a monumental statue of Nezahualcoyotl. 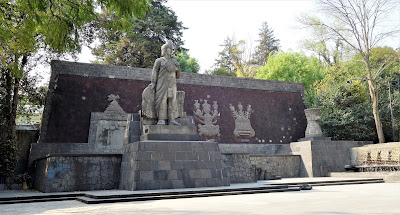 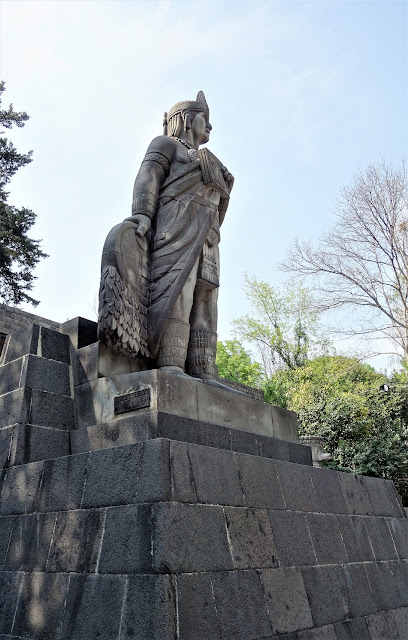 On the wall behind the statue are the symbols representing the three cities of the Triple Alliance which were the nucleus of the Aztec Empire. 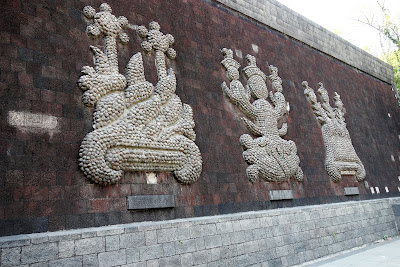 A short distance from the fountain is this carrousel.  It certainly appears to be of antique vintage. 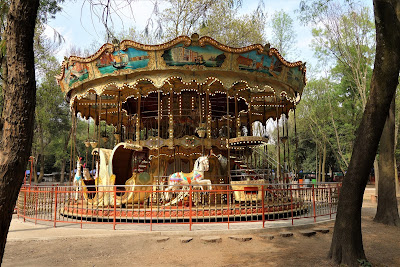 I am now approaching the northwestern corner of the park.  Here is a modern sculpture entitled "Energía" by a German artist by the name of Mathias Goeritz. 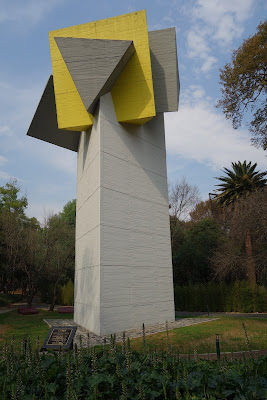 Just beyond that is a section of the park which I have never seen, and until a few year ago, I would have not been allowed to see it.  It is called "el Jardín de Adultos Mayores"... The Senior Citizens' Garden.  You must be 60 years old to enter.  There was a policeman at the entrance, and I was prepared to show him my driver's license.  But I told him that I was 65,  and he waved me on.

It is a very tranquil, attractive section of the park. 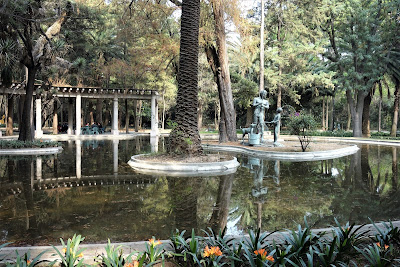 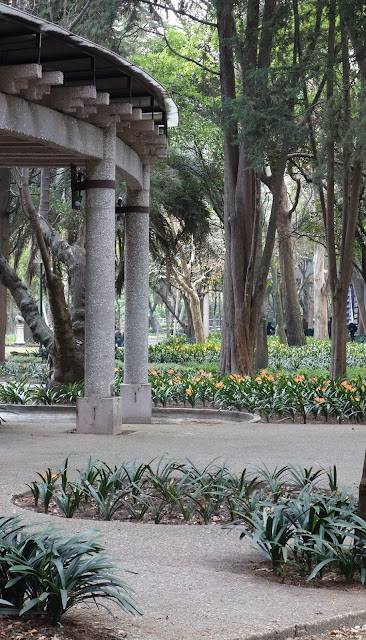 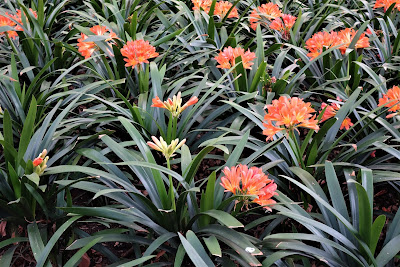 There were tables set up where senior citizens were playing dominos or cards. 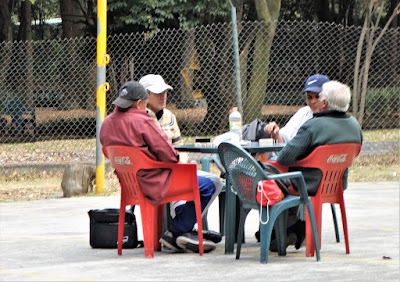 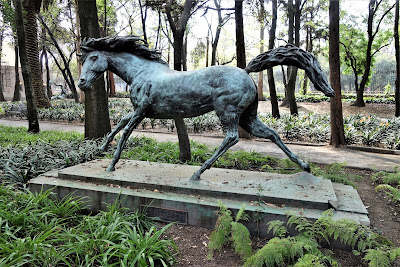 Within the Senior Citizens' Garden and at the very corner of the park is this pavilion which was donated to Mexico in 1968 by the Republic of South Korea, 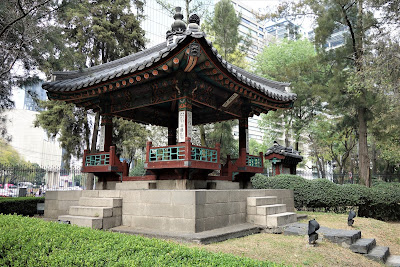 It is a replica of a 7th century pavilion in Seoul, Korea.  It can be seen through the fence running along the Paseo de la Reforma, but if you are within the seniors' garden you can appreciate at close range its colorful details. 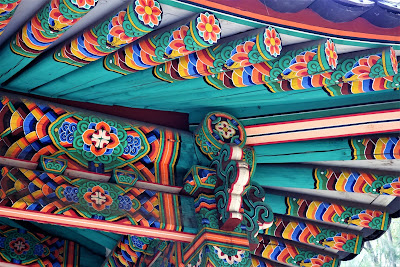 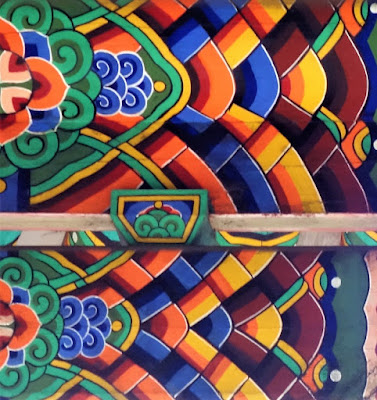 By this time it was late afternoon and time for me to hop on the subway and head back to my apartment.
Posted by Retired Teacher at 6:52:00 PM