Mexico City is a great city for food lovers.  There are of course innumerable Mexican restaurants with TRUE Mexican food, not Tex-Mex, and with every regional cuisine of the nation represented.  International restaurants with cuisines ranging from Italian to Japanese to Polish to American diner food abound also.

Even though I have been here in Mexico for over a month now, Alejandro and I had yet to go out to one of the nice restaurants that we usually frequent.  Yesterday he and I went to our very favorite place, "Angelopolitano". 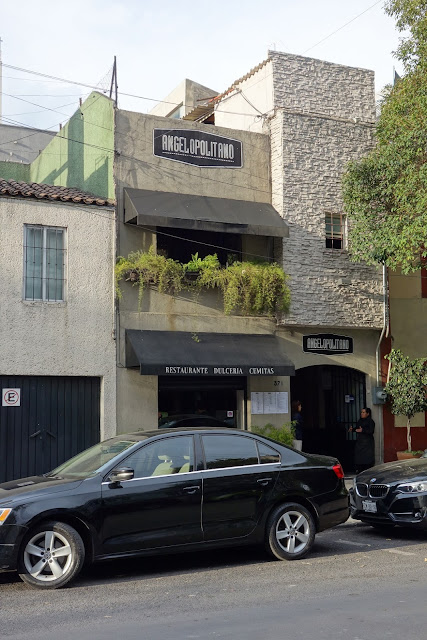 I have written about this place frequently on the blog.  In fact last week I mentioned that I went here for lunch.  The restaurant specializes in the regional cuisine of Puebla, one of the Mexican states with the richest culinary traditions.

Alejandro and I have come here so often that owner / chef, Gerardo Quezadas, recognizes us and, if he sees us, gives us a warm, personal greeting.  This time I asked if he would pose with us for a photo. 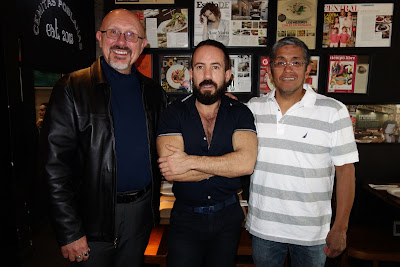 Whenever I dine here, it is always a problem deciding which one of the delicious entrees to order.  Will it be the "chiles en nogada", the best I have ever had, the house specialty "champandongo", layers of chicken and tortillas bathed in "mole poblano", or one of the unique fruit moles?   That problem is now even more complicated because Chef Gerardo has expanded the menu to include more of his family's recipes.

It may be a standard Mexican restaurant item, but tortilla soup has made its first appearance on the menu, so we both started with that. 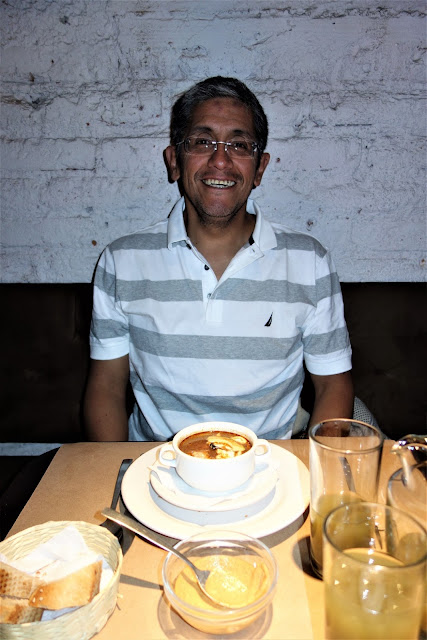 It was one of the best tortilla soups that I have had.  You can also see in the above photo the refreshing "agua fresca" of lime and peppermint that we ordered.  And the bread always comes with a bowl of the most delicious salsa made with peanuts and "chile de árbol".

For the main course Alejandro ordered a new item on the menu... enchiladas in "manchamanteles" sauce.  ("Manchamanteles" means "tablecloth stainer".)  I had a taste and it was delicious! 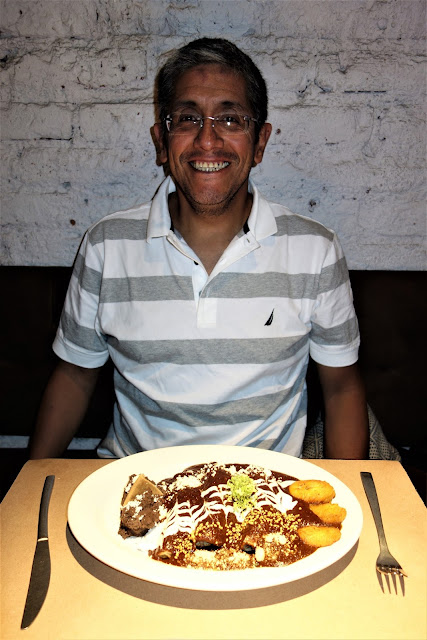 I too ordered something new... a variation on "chiles en nogada".  It was a pepper stuffed with codfish, and covered with a macadamia nut sauce.  Absolutely superb! 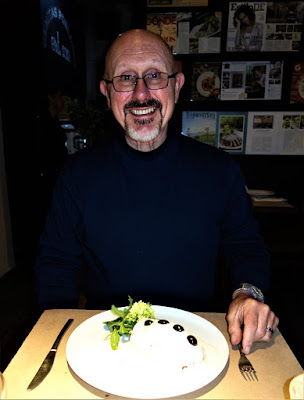 We finished with dessert and "café de olla" (coffee brewed in a clay pot with cinnamon and brown sugar).  Alejandro had a corn cake with Mexican caramel, and I had coconut flan.

"Angelopolitano" is not an inexpensive restaurant, but our bill for two for all of that wonderful food was around $45 U.S.  If you could find anything comparable in the U.S., I can imagine what the price would be!

For anyone visiting Mexico City, I highly recommend a dining experience at "Angelopolitano"!