The Search for a "Molcajete"

In Mexico, long before there were electric blenders or food processors, there was the "molcajete", a stone mortar and pestle used for grinding spices and making salsas and guacamole.  There are those who say that salsas prepared in a "molcajete" have a better flavor, and it is still a cooking tool that is found in some Mexican kitchens.

I decided that I wanted to get one, and to try my hand at preparing salsa the old-fashioned way.  Every Sunday there is a "tianguis" (outdoor market) held on the street just around the corner from my apartment. 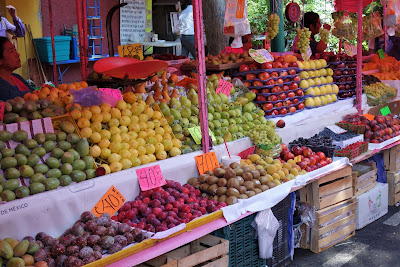 Alejandro and I walked the entire length of the "tianguis", but there was not a "molcajete" to be found.  That afternoon we went to his parents' house, and we went to the neighborhood market building there. 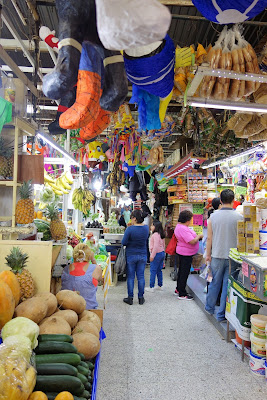 Alejandro asked one of the vendors if anyone sold "molcajetes", and we were directed to a stall at one end of the building.  The fellow there had a couple on display. 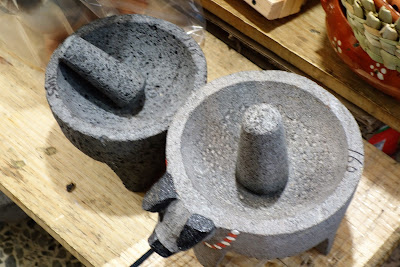 However, the best "molcajetes" are made from black stone.  The vendor brought one out, and that is what I purchased for 190 pesos. 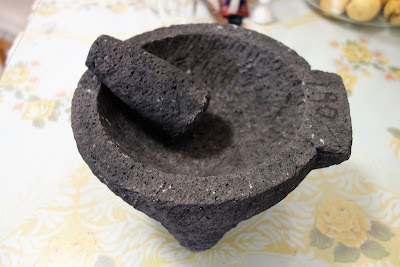 Before using it, like a cast-iron frying pan, a "molcajete" has to be "seasoned".   Alejandro's mom threw a handful of dry beans into it and proceeded to grind them. 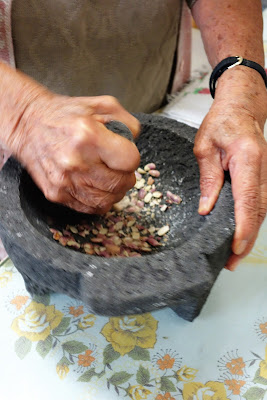 This removes any dirt in the pores of the stone, and it is then washed.  The "molcajete" is now sitting on the kitchen counter of my apartment.  When the cleaning lady comes tomorrow, she will probably think that this crazy "gringo" is trying to go native.