I love Mexican food, but there are some dishes which I will not even try!  I will not eat insects (grasshoppers and ant larvae are delicacies down here) and I will not animal organs.  In that second category is "pancita" (literally "belly") which is made from cow stomach.  The stomach must be thoroughly washed and soaked in a chlorine solution to remove all remains of the food the cow ate as well as all bacteria.  No thank you!

Alejandro's mother, however, makes a kind of faux "pancita" that does not contain any organs... in fact it is a vegetarian dish.  She has often talked about making it for me.

On Sunday, when Alejandro and I were at the open-air market, he spotted the principal ingredient.  Instead of cow stomach, the recipe uses a type of mushroom called a "seta".  He bought a large "seta" so that his mom could make "pancita" when we went to his parents' house later that afternoon. 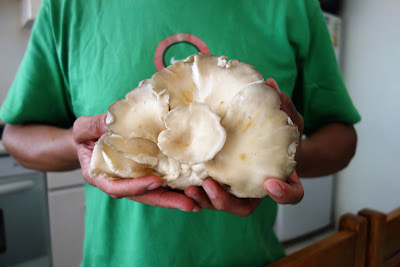 I always thought "seta" was a generic word for any type of mushroom, but according to Alejandro the word refers to this particular kind of mushroom (at least in Mexico).

The "seta" cut into small pieces. The broth in which it is served is made with "guajillo" peppers, a dried, medium-hot chile.  The peppers are cooked in water to rehydrate them. The peppers are then placed in a blender along with a chunk of onion, some whole cloves of garlic, oregano and water.   The ingredients are pureed and are strained through a sieve into a kettle.  The mushrooms and the broth are cooked together in the kettle. 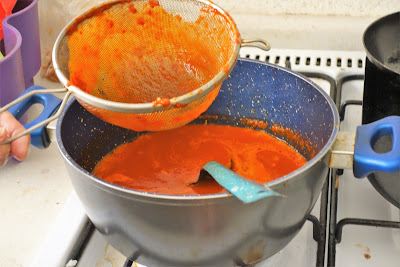 Although this broth is very red, there are no tomatoes in it.

It was very good.  I even had a second bowl of it.  It supposedly tastes exactly like real "pancita".   I know it's all a cultural, psychological thing, but I still would not be able to eat cow's stomach. 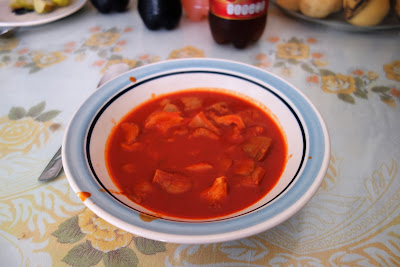