A Less than Stellar Day

I am writing two rather negative posts in a row.  Readers are going to think that my love affair with Mexico City is waning.  Not so, but, wherever you are, not every day is going to be fantastic.

Our plan for Saturday was to take the group of relatives and friends who were visiting Alejandro on an excursion to Valle del Bravo, a lovely lake town a couple hours from Mexico City.  Alejandro's car is not big enough for all seven of us, so he called on Friday to rent a van.  Early Saturday morning, he and I took a Uber to the airport to pick up the vehicle.  I had never heard of the company... Mex Rent a Car.  In spite of the reservation, they did not have a van available for us.  The young lady at the desk called some other agencies, and said that Eurocar had a van.  We were driven to the area where all the different car rental agencies have their fleets of cars, but when we got to Eurocar, they said they didn't have a van available for immediate pick-up either.  So we proceeded to go from one agency to another looking for a rental.  We got to the last agency, Hertz, and they had a van!  After doing the paper work, the vehicle inspection, etc., we headed off to the hotel to pick up our group.

Fortunately it was still early... around 9 AM.  We wanted to get out of the city, not only because Valle del Bravo is a couple hours away, but because this was the day of the annual Pride Parade.  By noon they would be closing down streets for the parade.  None of us had eaten breakfast so we stopped at a shopping mall in the western district of Santa Fe along the main highway out of the city.  There was a Sanborns restaurant in the mall, and we all ordered the weekend breakfast buffet.

The televisions in the restaurant were showing the soccer match between Mexico and Russia.  (Apparently some sort of international tournament is being held in Russia.)  I had to chuckle when Russia scored the first goal.  Someone at our table said, "Right now Trump is tweeting, 'Our team just scored.' "  Before we left Sanborns Mexico scored two goals, and the restaurant erupted into cheers and applause.  (The final score was 2-1.)

I did not hear the conversation, but, sometime during breakfast, the group decided that we shouldn't bother with our excursion.  The weather forecast in Valle del Bravo called for rain, and they thought we might as well go back to the city and see the parade.  Alejandro and I were both rather ticked off that we had gone through all that hassle of renting a van for nothing.  (In fairness, I should say that the others paid their share of the rental.)

So we headed back into the city, found a parking lot for the van, and walked to the Paseo de la Reforma where the parade was soon to begin.  I had no desire to stand for several hours amidst the crowd, and neither did Alejandro, so we left the others, and took a walk.  We ended up on the Plaza de Madrid, a circular park with a replica of the Cibeles Fountain of Madrid, Spain, in the center. 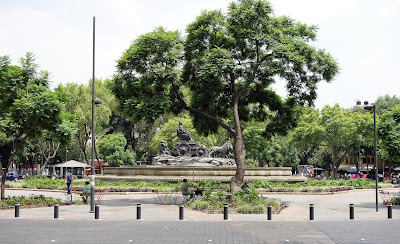 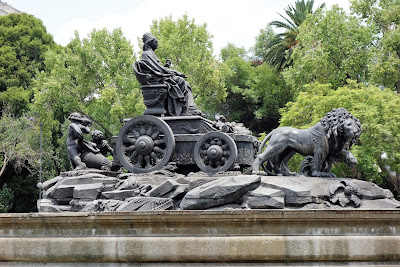 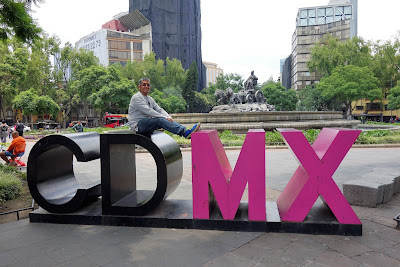 On one of the streets leading into the plaza there is a weekend bazaar.  We wandered through that, and I bought a couple things.  My bad mood was starting to dissipate. 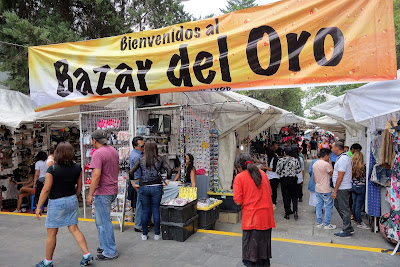 We then stopped in a coffee shop for something to drink.  Alejandro got a phone call.  The older members of the group were bored with the parade and had returned to the hotel.  We agreed to meet at the parking lot where we had left the van.

We drove to Coyoacán, a picturesque neighborhood in the southern part of the city.  We stopped at a taco joint there for something to eat.  That's when it started to rain.  (After all, it was July 24th, the Day of St. John the Baptist, the saint that the natives associated with Tlaloc, the rain god.)

We walked around Coyoacán a bit in the light rain... 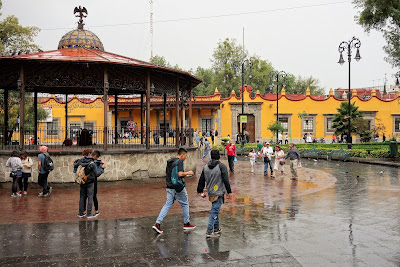 ...and then we ducked into the Coyoacán market.  Neighborhood markets are always colorful places, and this one was no exception. 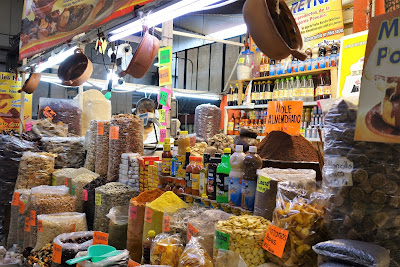 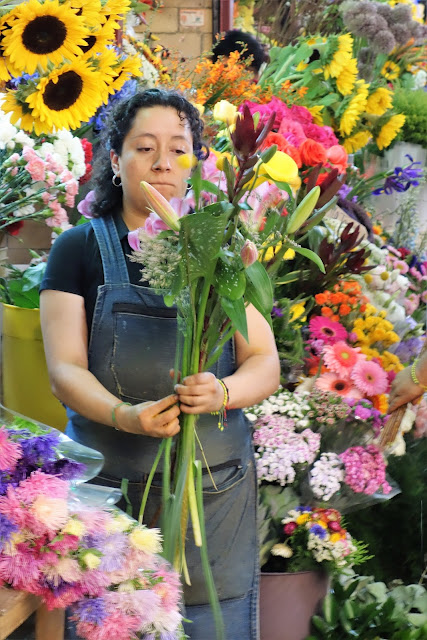 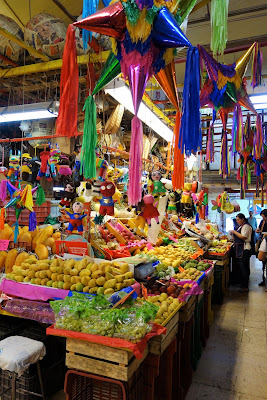 Later that evening we went out to a movie theater.  The group decided upon "Wonder Woman", which is not my type of movie.  However, I have to admit that it was better than I expected.

Well, in retrospect, perhaps it wasn't such a bad day after all...  although I would have still preferred to go to Valle del Bravo.