I have mentioned several times the Metrobus line that runs the entire length of Insurgentes Avenue.  That line, the first to be constructed, was opened in 2005.  Since then five more lines have been built along major thoroughfares throughout the city.

There are plans for a seventh line, but they have been stalled by controversy.  The newest line is supposed to run for more than nine miles along the iconic, tree-lined boulevard, the Paseo de la Reforma. 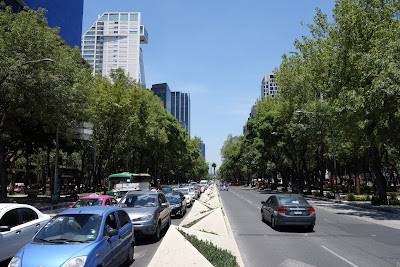 The line will be served by a fleet of 80 double-decker buses.

Work had already begun on preparing the lanes dedicated to the bus line, when a judge ordered a halt on the project. 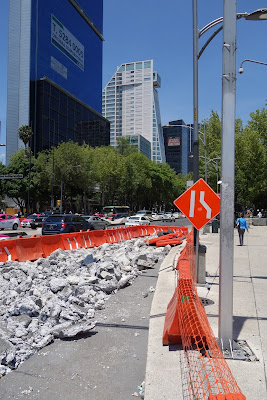 Since the Paseo de la Reforma is designated as an historic landmark protected by law,  major alterations to it are prohibited.  Mayor Miguel Mancera of Mexico City vowed that there will be a Metrobus line along Reforma.  The project, the Mayor insists, would be of minimal impact on the appearance of the boulevard.  No trees would be cut down along Reforma.  The Metrobus would take two of the thoroughfare's existing lanes, and current curbside bus stops would be used for the Metrobus.  There would not be the construction of the large, roofed bus stops in a median strip as is the case with most of the other lines. 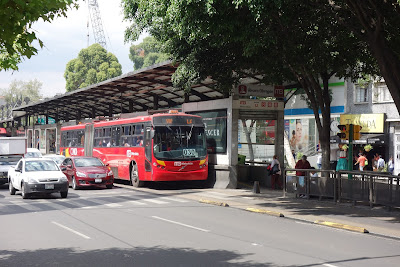 ... but rather like this stop along Metrobus Line 4 which passes through the Historic Center. 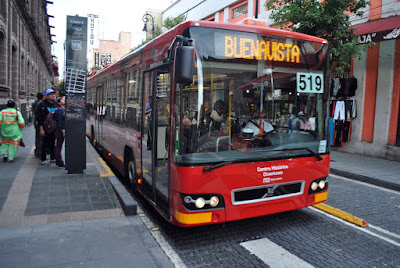 I read in a newspaper article yesterday that the National Institute of Anthropology and History, the organization responsible for the country's historic sites, has ruled that the new line would not have a negative impact on the city's patrimony, as long as a few modifications are made to the plan.  One of those changes would be the elimination of any Metrobus stops along the portion of the route that passes through Chapultepec Park.

I was looking forward to the completion of this line because it would provide easy access by public transport to a some of the city's major attractions, especially the Anthropology Museum.  However, since the museum is located within Chapultepec Park, it seems that there may not be a bus stop there.  It will be interesting to see how it all turns out.
Posted by Retired Teacher at 9:45:00 AM