Yesterday morning I was up before dawn for my journey to Mexico City.  I have written previously that I have changed my preferred route to get there.  Instead of flying United Airlines all the way to Mexico City (usually via Houston), I am now flying United to Chicago and then taking the Mexican airline Interjet.  On my last trip this itinerary worked perfectly other than the fact that I had scheduled an overly long layover in Chicago.  This time I encountered some annoyances, although I will still intend to fly Interjet on future trips.

On this trip I booked a slightly later flight from Cleveland to Chicago O'Hare.  By the time I got off the plane, took the train to the international terminal, and had a light breakfast at a little café there, the Interjet desk was open and checking in passengers for their 1:00 PM flight to Mexico City.  Passing through security was relatively painless since there was still no line.  I whiled away my time in the international concourse... a bit of shopping and another snack... and the Interjet plane pulled up to the gate around 12:15. 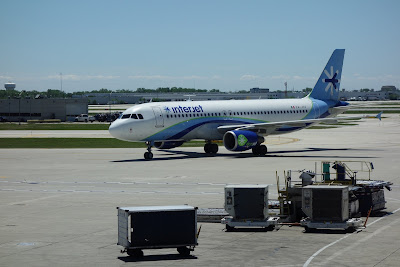 However, it was announced that our departure would be delayed.  They were waiting for the crew due to congestion at security.  (Hmmm... I thought that the flight crews had their own special line at security.)  They finally arrived around 1:00 and we began to board.  This flight was less empty than the flight I took in April.  However it was far from crowded.  But as luck would have it, my row of seats was probably the only row on the plane that was fully occupied all the way across.  Nevertheless, with the extra legroom on Interjet, it was a comfortable flight.

We finally pulled away from the gate about 35 minutes behind schedule.  Then we waited and waited for our turn to take off.  It was around 2:00 PM before we were in air.  In spite of that, we made good time, and we touched down at Mexico City International Airport at 5:35... only fifteen minutes late.

However, there was no gate available for us at the airport.  We waited on the plane for a half hour.  Finally a couple of buses arrived to transport us to the terminal.  That short trip seemed to take forever.  The buses were constantly stopping for no apparent reason.  When we got to the terminal, the line at immigration was long.  When I finally emerged from immigration and customs, my friend Alejandro was waiting for me.  He drove me to the apartment, and even though by that time it was 7:30, traffic was still heavy.  It was nearly 8:30 by the time that we arrived at the apartment.

Although yesterday's journey was at times frustrating, there were no major problems.  I am now settled into my apartment, and ready for another month in Mexico City.