In the Historic Center Far from the Tourists

Mexico City's “Centro Histórico” is the largest colonial neighborhood in the Americas.  Many of the top tourist attractions of the city are located here.  But if you go a few blocks away from the tourist route, you enter an old city which has not been prettified or sanitized.  It is an assault on the senses with the crowds of people, the smells of street food, and the cacophony of vendors hawking their wares.

Yesterday I wandered around the old city and actually saw some places I had not seen before.

I came across this colonial building.  It is now a cultural center run by the University of Mexico. 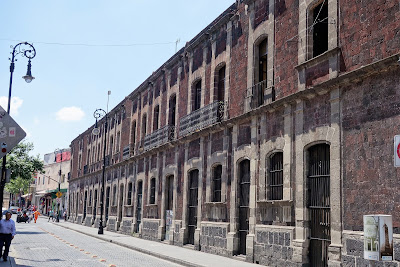 I went inside, and the lady at the front desk said that I could enter and take pictures of the courtyard. 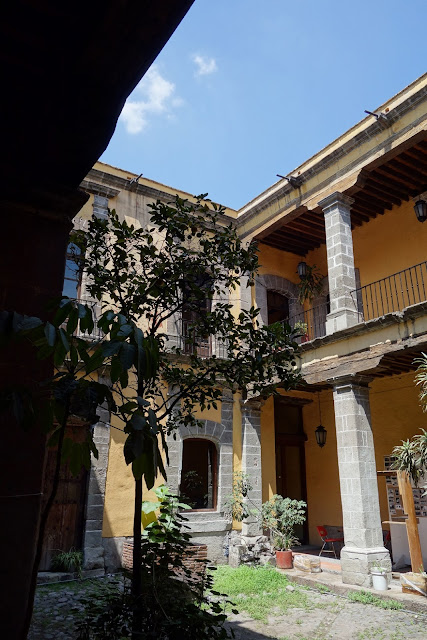 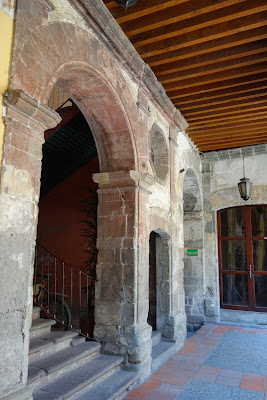 It looked older than many of the colonial buildings.  As I left, I asked the lady if she knew when it was built.  She said it dated back to the late 16th century... so it's more than 400 years old!  I later did a bit of research on the building.  It is known as the House of Talavera, and it was once the home of a Spanish nobleman, the Marquis of Aguayo.  When it was built, it was located on the shore of Lake Texcoco (the lake which once covered much of the valley where Mexico City is located).  The house originally had gates where canoes could pull up to it.

The street across from the house is called Talavera Street, and it is a pedestrian street. 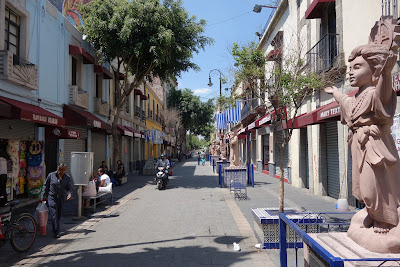 The street is also known as “Niño Dios” (God Child... i.e. Baby Jesus).  All along this block there are religious statues, including several of young Jesus, that were placed here through private donations. 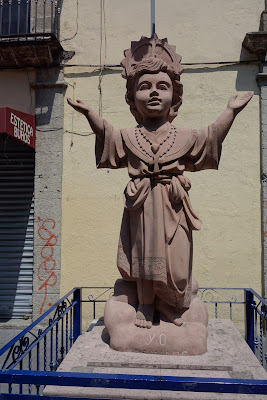 Most of the stores along the street sell clothing for images of the Baby Jesus.  Every year for the Feast of Candlemas (February 2nd) people will take their Jesus doll that was brought out for Christmas, buy it a new set of clothes, and take it to church to be blessed.  Since this is not the time of year when there is a big demand for these clothes, the majority of the stores were closed.  However there were a few that were open, and I was able to take some pictures of outfits for little Jesus. 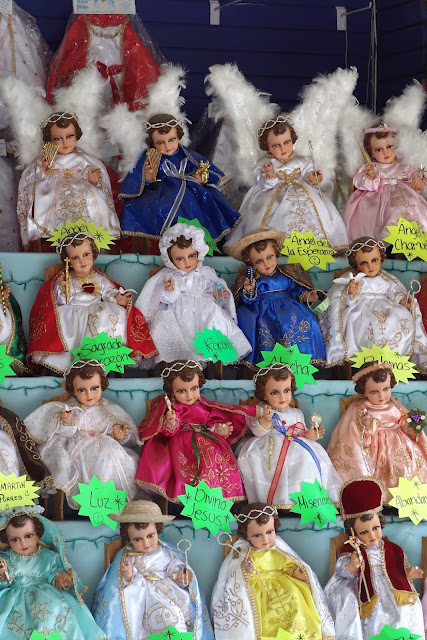 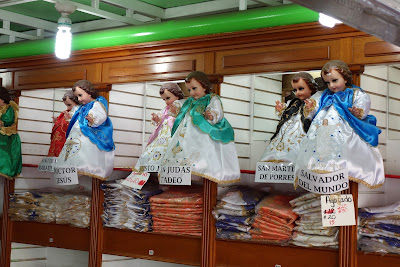 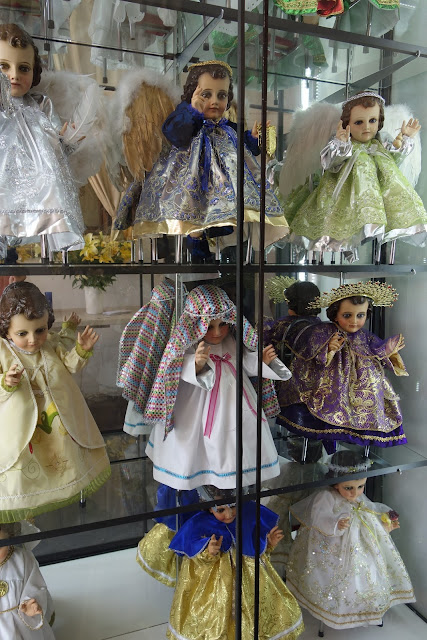 I am sure that in January all the stores are open and doing a thriving business.

At the next block the street changes its name to "Alhondiga".  It is still a pedestrian street, but here it is crowded with a "tianguis" (outdoor market). 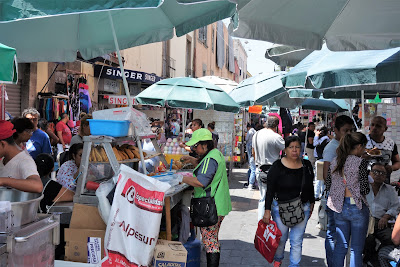 If you dare, there are plenty of stalls selling street food. 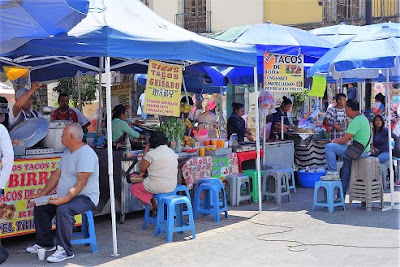 Bins of different kinds of chile peppers.  The "chiles de árbol" in the lower right are "muy picoso"... very hot! 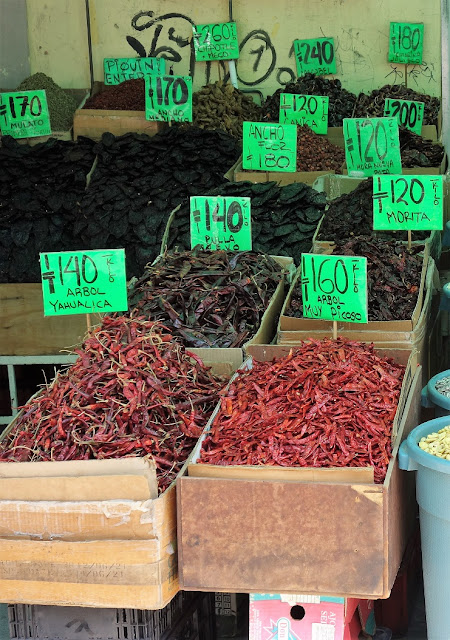 Bins of dried beans and seeds.  Note the bin of "chía" seeds.  Yes, the same seeds that come with "chía pets". 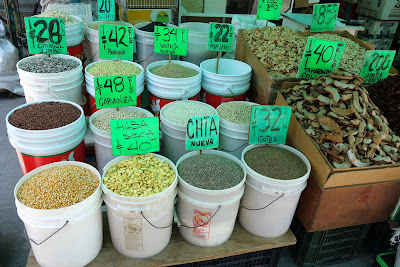 One store along the street was selling soccer shirts.  If you've read much of this blog, you know that I collect Mexican and Spanish soccer shirts.  I spotted a shirt I don't have... "Los Tigres", the team from Monterrey.   They had my size, and the shirt was made in Mexico (not China), so I bought it for 160 pesos (less than $9 US).  I think I will have to return here and see what else they might have. 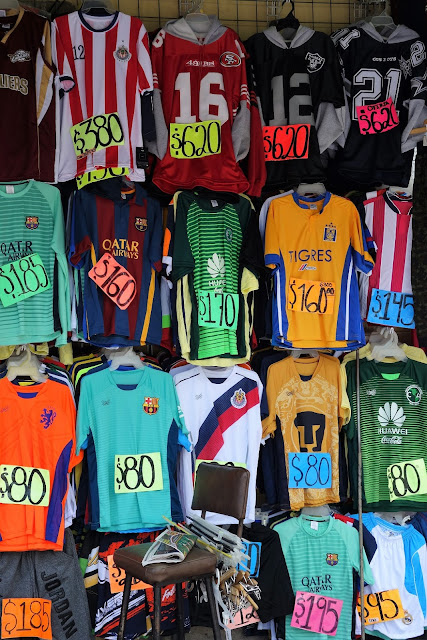 After a couple more blocks the street changes its name again.  Now it is "Santísima", named after the Church "Santísima Trinidad" in the background.  Now I am back in familiar territory although still not in an area visited by many tourists. 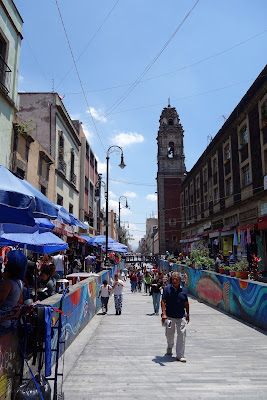 The façade of "Santísima Trinidad" (Most Holy Trinity), which dates back to 1735, is an excellent example of the ultra-baroque Churrigueresque style that was popular in colonial Mexico. 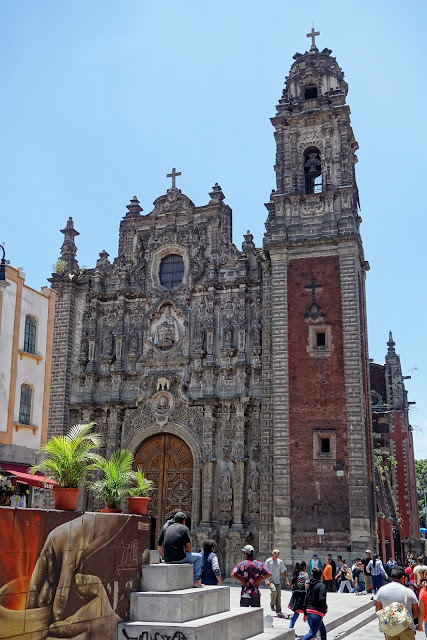 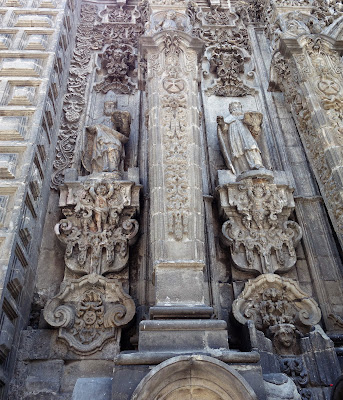 The original ornate and gold-gilt interior was replaced with a simpler neo-classic style. 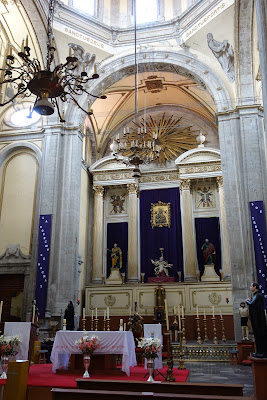 Over the years the church has sunk about nine feet.  (In Mexico City it is not uncommon for buildings to settle into the spongy soil.)  As a result Santísima Street and the intersecting Moneda Street have ramps descending to the level of the church.  The walls along those ramps have become a canvas for talented street artists.  This is something new that I had not seen the last time I passed through here.  Like the Romita neighborhood that I wrote about last week, the area around "Santísima Trinidad" has become a prime location to see Mexico City street art. 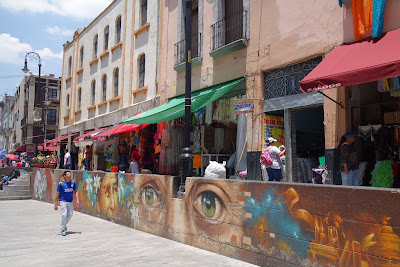 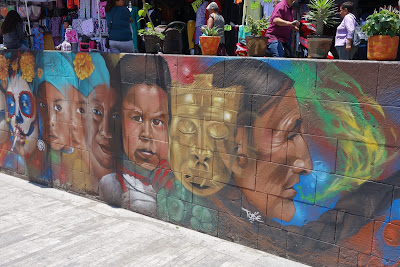 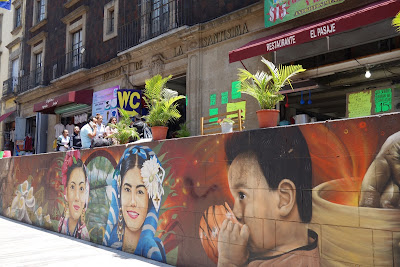 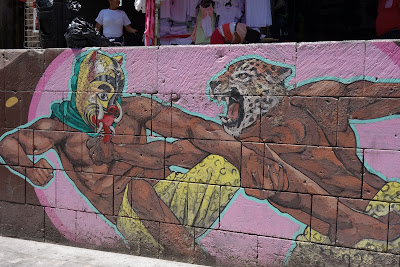 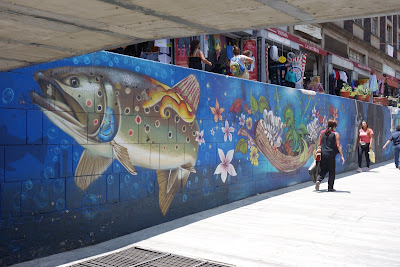 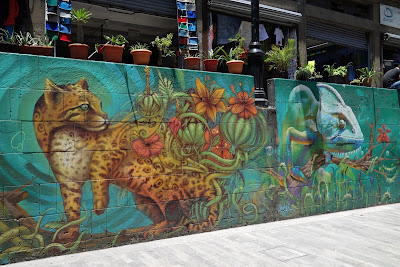 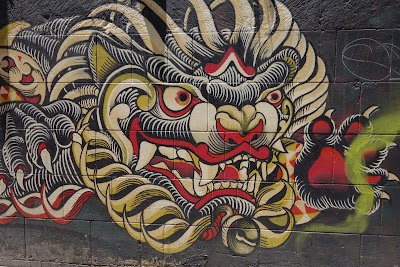 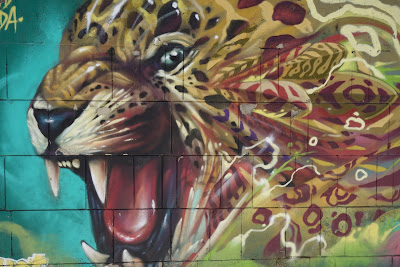 Be careful, however, because the paved area in front of the church seems to be a favorite spot for young skateboarders. 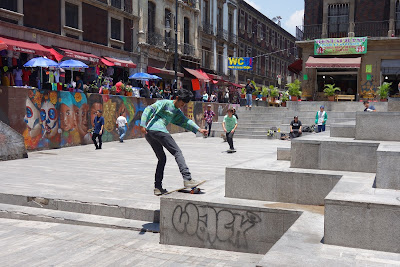 From there it is not a long walk down Moneda Street to the Zócalo, Mexico City's main square. 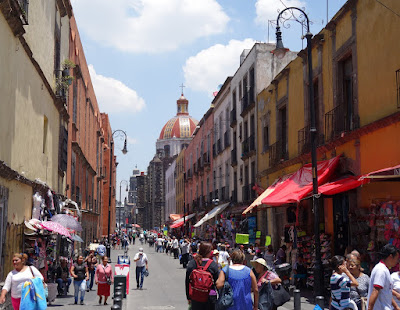 Looking down the street you see the tiled dome of the Church of Santa Inés, and beyond that, you can make out one of the towers of the Cathedral.

Back on the Zócalo... back in tourist territory... 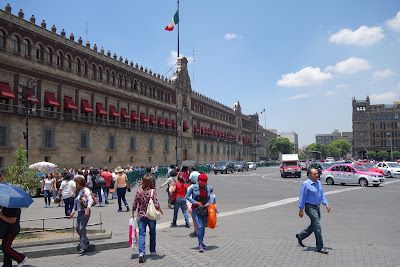 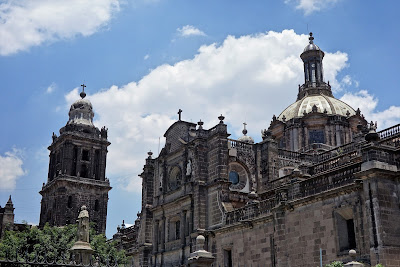