Sailing Among the Skyscrapers

Perhaps it is because tourist boards in the U.S. fear that the political climate will discourage international tourism, but I have noticed advertising campaigns here in Mexico City promoting tourism in two states, Illinois and New York.

The other day as I was walking through the prosperous neighborhood of Colonia del Valle, I noticed this billboard. 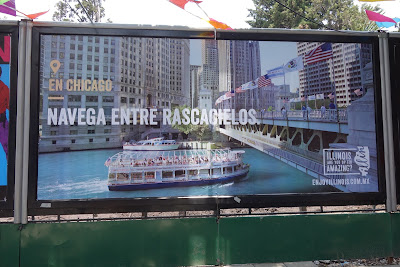 The billboard shows one of the tourist boats that ply the Chicago River, and the caption says, "In Chicago, sail among the skyscrapers."

Unfortunately, many people in the United States think of Mexicans coming north of the border only in terms of undocumented immigrants.   They don't realize that among middle and upper class Mexicans, the United States is a favorite tourist destination.  This year however, many Mexicans are rethinking their vacation plans.