The End of the Line

I have written about Insurgentes Avenue, Mexico City's longest road, and the Metrobus line that runs its entire length.  I ride the Metrobus all the time, but I have never ridden it all the way to its southern terminus.  So one day last week, just for the heck of it, I decided to take the bus to the end of the line.

It is a long bus ride even though my neighborhood bus stop is already south of center.  It took at least forty minutes.  I can imagine how long it must take to cross the entire city from north to south!  Fortunately, shortly after boarding, a seat was free, and I was able to sit down and enjoy the ride. 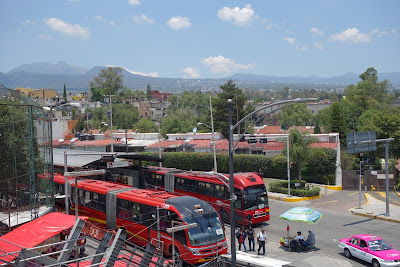 The final stop is called "Caminero".  It gets its name from the fact that there is monument nearby in honor the workers who built Mexico's highway system.  It is here that Insurgentes Avenue ends and becomes the Federal highway that crosses the mountains to Cuernavaca.  That highway was the first four-lane toll road in the country, and in its day it was considered quite an engineering feat.  So, this is a very appropriate spot for the monument.  After getting off the bus, I wandered around a bit, but I never did find the monument.

There did not seem to be anything to see in the area around the bus terminus.  It was just a very busy traffic area.  From a pedestrian bridge crossing the highway I got a picture of Ajusco, the nearly 13,000 foot high volcanic peak at Mexico City's southern limit. 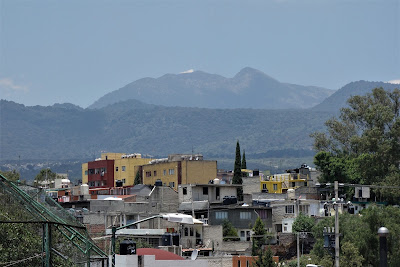 I was soon back on the bus.  Since it was the beginning of the route, I had a seat, of course.
Posted by Retired Teacher at 4:28:00 PM