When I am down here in Mexico City, I usually do not go out for breakfast.  I make it myself in the apartment.  However, there is a good possibility that friends and relatives will be visiting me in the future.  I need to know some places in the neighborhood where they can have a good breakfast.  There is a Sanborns nearby in the World Trade Center.  (For those who are not familiar with Mexico City, Sanborns is a chain of restaurants found all over the city as well as throughout the country.)  Sanborns is not spectacular, but is generally a decent place, especially for breakfast.  However, Alejandro and I have been to the nearby Sanborns a couple times, and we have not been impressed with the food or the service.

Alejandro had "machaca" (shredded, spiced beef) with eggs and frijoles.  He said it was good, although it might be too spicy for some gringos' tastes.

I had "milanesa de pollo" (breaded chicken cutlets) served over frijoles and 'chilaquiles". 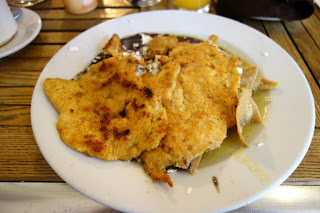 It wasn't bad.  It was certainly a very hearty breakfast for a very reasonable price.  I would say that "Fonda Trotamundo" is a possibility for breakfast with visitors.

I had to chuckle.  The menu included a "Desayuno Gringo"... a Gringo Breakfast.  Bacon and eggs... but, of course, with a side of frijoles!