In a small gallery of the National Museum of Art, there was a single painting on special exhibit, "Palas Atenea" by Rembrandt. 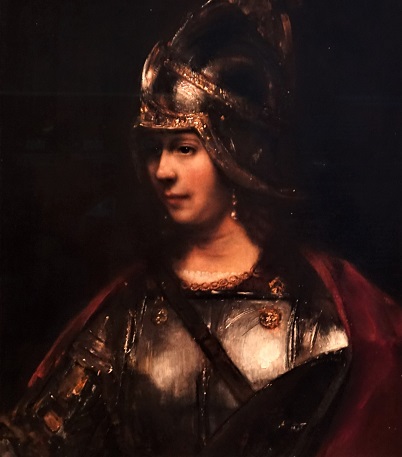 This painting by the Dutch master depicts the Greek goddess of wisdom and protector of warriors.  It comes from a private collection, and this is the first time that the painting has been exhibited in Mexico.  Rembrandt painted it around 1654 for a festival of the painters' guild in Amsterdam.

The model for the portrait was Hendrickje Stoffels.  After Rembrandt's wife Saskia died the artist hired Hendrickje as a maid and caretaker of his only child Titus.  They eventually became lovers and she bore Rembrandt a daughter Cornelia.  It is said that the solemn expression of the goddess in the painting is a reflection of Hendrickje's strength in defying conventions and living with the artist.  The pearl earring that she wears may be a subtle wink by the painter defending his companion against social critics.