Into the Mayan Underworld

The other special exhibit at the Palace of Fine Arts consisted of a single work, "Xibalbá, the Mayan Underworld".  This mural was done by Guatemalan-born painter Rina Lazo.  It was her last work of art, completed in 2019, the year that she died at the age of 96.

Lazo was influenced by the Mayan people of her homeland.  She moved to Mexico where she was a student and assistant to Diego Rivera.  She worked with him on some of his most famous projects.  After Rivera's death, she continued to do mural paintings on her own and is considered an important figure of the muralist movement. 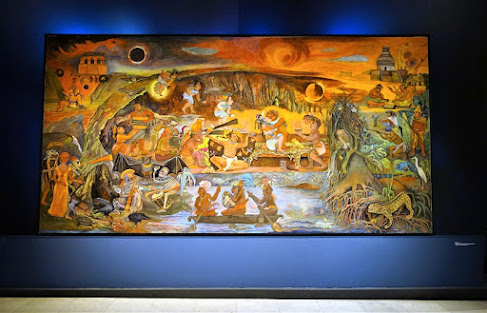 In one portion of the mural, we see Hun Camé and Vucub Camé, the lords of the underworld.  Above them is Camazotz, the bat spirit in service to the lords. 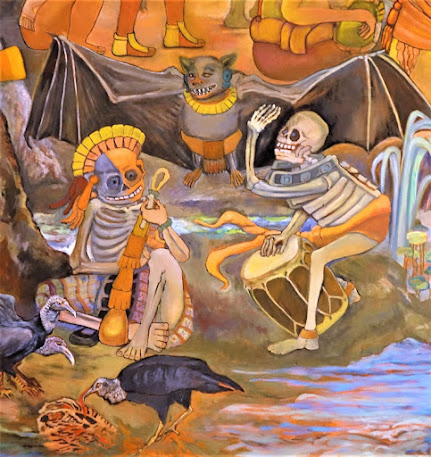 Hun Hunahpú, the corn god is shown in his canoe.  He would travel to the underworld to gather and take back seeds so that they could be reborn. 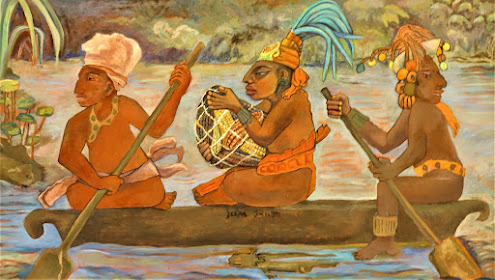 In the upper corner a ball game is in progress.  In Mayan mythology, the Twin Heroes, Hanahpú and Xbalanqué, were playing the ball game, and the noise disturbed the lords of the underworld.  They challenged the twins to a game in the underworld.  The lords planned to kill the brothers, but the twins managed to outsmart them.  The heroes left the underworld and became the sun and the moon. 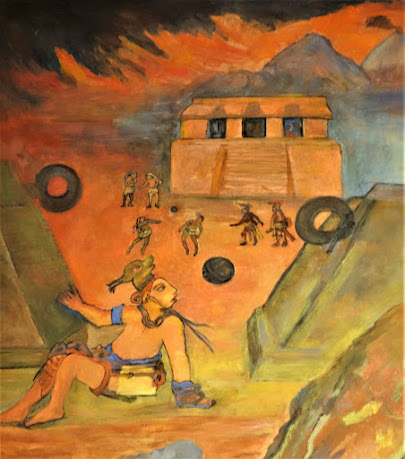 In the lower corner the artist included a self-portrait of herself entering the underworld.  She is led by a dog, which according to Mayan tradition, is the animal which guides humans on their final journey.  Notice that one of her legs has already been transformed into a skeleton.  (I wonder if she got that idea from the movie "Coco"?) 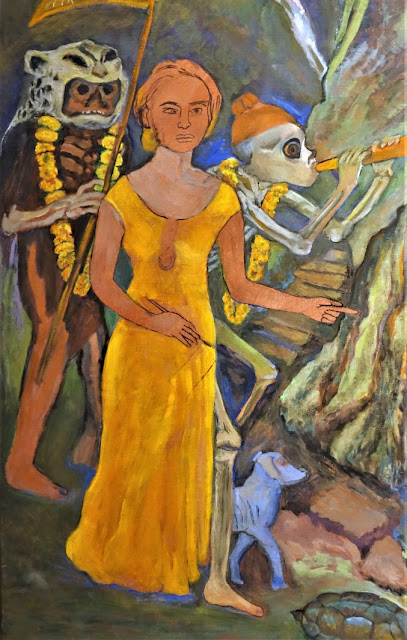 The artist joked that she left the self-portrait for last because she did not want death to take her before she finished the mural.
Posted by Retired Teacher at 7:29:00 AM