It's time to turn the page on the calendar which I created using photos from my travels.  This year's theme is parks and gardens from around the world.  It is fitting that October's picture is from Munich, Germany, the home of the Oktoberfest, the world's largest beer festival.  Here we have Munich's Hofgarten. 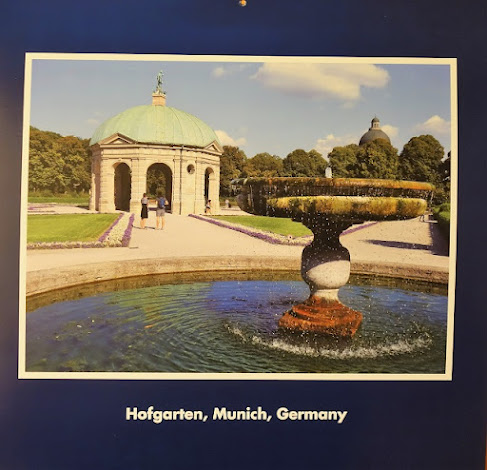 I visited the Hofgarten (the Court Garden) on a trip that I took to Switzerland, Austria and Germany in the summer of 2019.   This 17th century park is located behind the "Residenz", the former royal palace from the days when Bavaria was a separate kingdom.

Although the festivities of the Oktoberfest are held in a different part of the city, I am sure that at this time of year the park is not as uncrowded and tranquil as it appears in this photo.  The event attracts around six million visitors each year, and all of the city's attractions are probably thronged with tourists.  By the way, Oktoberfest actually begins in September, and will last until Monday, October 3rd.