I have written a number of times about the "Paseo de la Reforma", Mexico City's most famous boulevard.  The monument-studded, skyscraper-lined thoroughfare crosses the heart of the city.  It skirts the historic center, runs through one of the major commercial districts, passes the city's most important park, continues on through one of the most affluent districts, and then cuts through an even ritzier neighborhood.

I decided today to see how far my legs would take me down the "Paseo de la Reforma".  It took me about 15 minutes to walk from my apartment to the section of the boulevard where the city's tallest buildings are clustered. 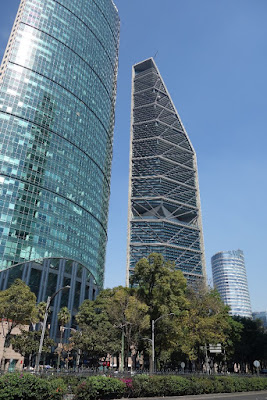 From here I was going to give myself two hours to walk westward along "Reforma".  Would I make it to territory that was new to me?

The original boulevard ended at the entrance to Chapultepec Park, but it was later extended and now continues along the edge of the park. 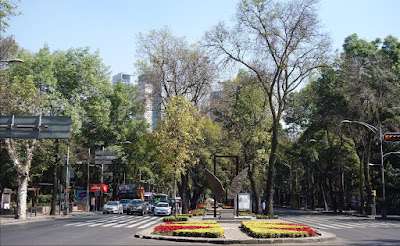 The park and its many museums are closed on Mondays, but here is a glimpse peeking between the rails of the fence. 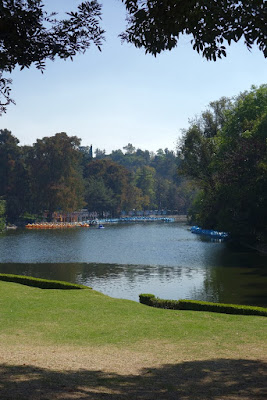 Along the fence that forms the border of the park there are usually photographic exhibits.  Today there were three different exhibits.  This definitely slowed my walking pace since I stopped to look at a great many of the photographs and to read the captions. 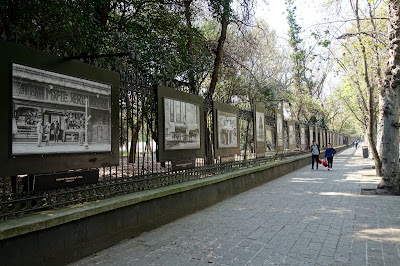 One of the exhibits was a collection of archival photographs of Mexico City spanning the 20th century. 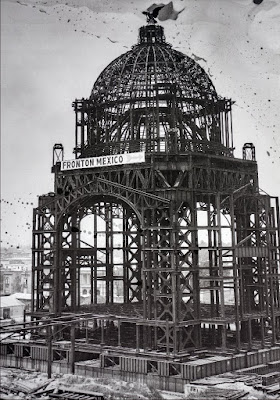 Here we see the Monument to the Mexican Revolution under construction in 1929. 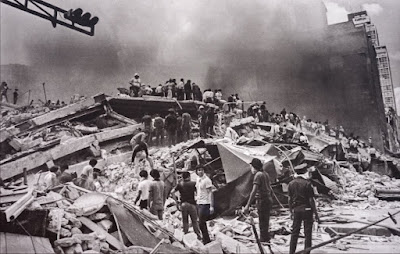 The devastating earthquake of 1985

On the opposite side of the boulevard is the National Museum of Anthropology.  An enormous statue of the rain god Tlaloc stands at the entrance to the museum. 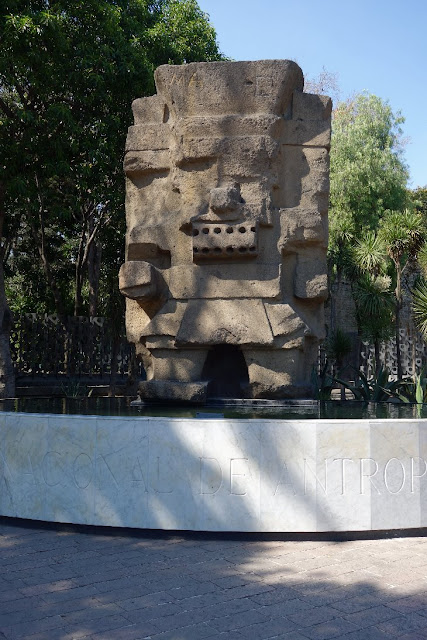 Just beyond Chapultepec Park is the National Auditorium.  This enormous hall, which has seating for 10,000 people, has been the the venue for everything from opera to rock concerts. 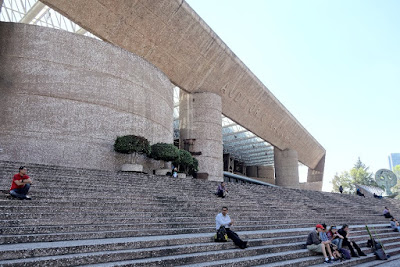 We are now in the neighborhood of Polanco, one of the most affluent parts of the city.  Large hotels such as the Hyatt dominate the skyline. 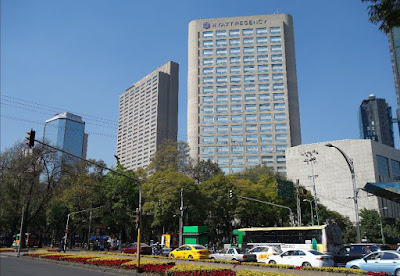 Beyond this point I am entering new territory.  I reach an enormous traffic circle where one of the city freeways passes under "Reforma." 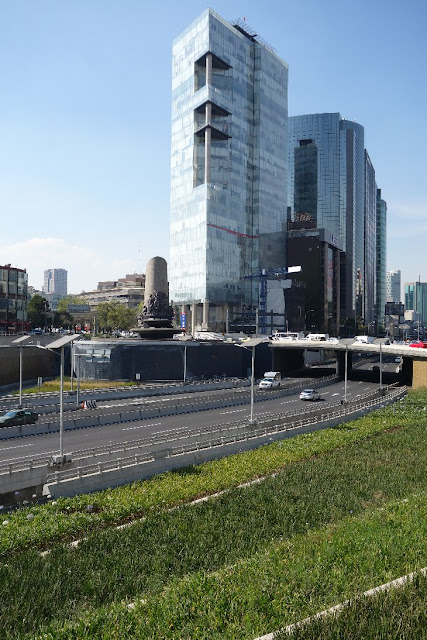 In the middle of this traffic circle is the Monument to the Mexican Petroleum Workers.  It was built in 1952, and commemorates the nationalization of the oil industry in 1938. 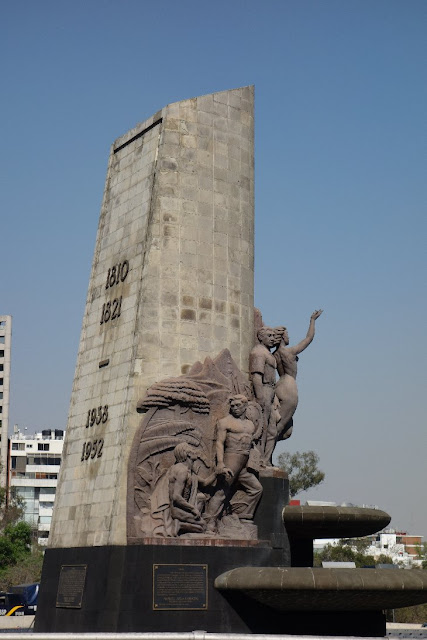 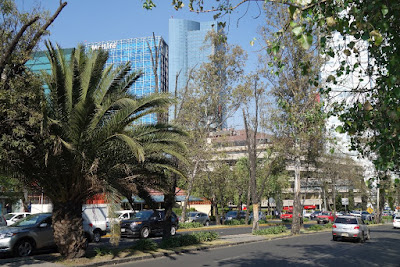 But as I continue down the boulevard, the office towers give way to palatial homes.  "Lomas de Chapultepec" could be called the Beverly Hills of  Mexico City.   Many homes are hidden behind tall, vine-covered walls, but others are visible from behind their iron fences. 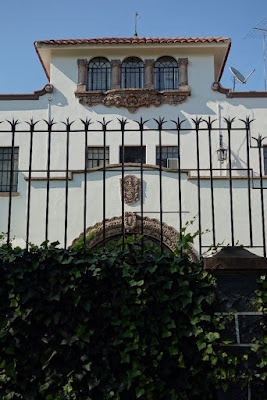 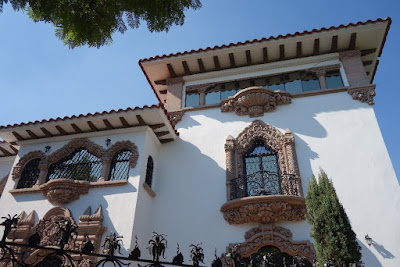 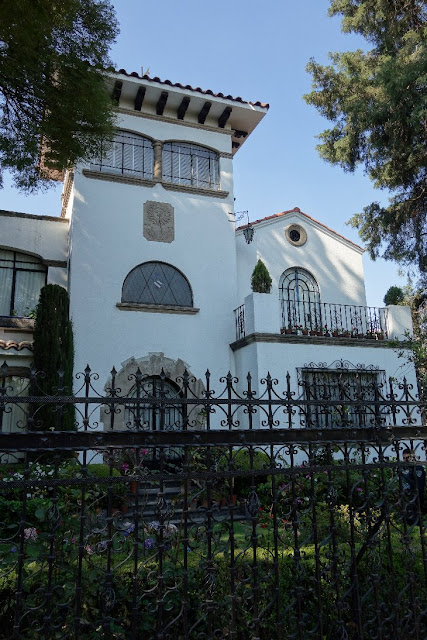 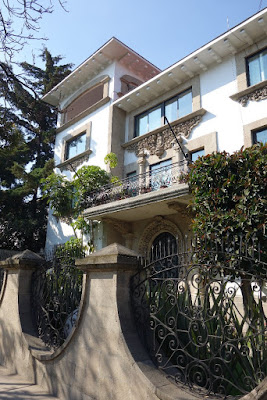 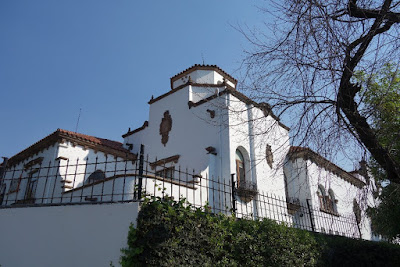 Some of these mansions are foreign embassies.  I passed the embassies of Poland and the United Arab Emirates.  But most of them are the private residences of politicians, major celebrities in the entertainment industry, and wealthy businessmen.   Carlos Slim, one of the richest men in the world, has his home in "Lomas".

By this time I had reached the two hour limit which I had set for myself.  I had walked about four miles, but it seemed much farther.  I hailed a taxi and rode back to the apartment.  The taxi driver was a jovial fellow, and we had a good conversation.  The fare was only 49 pesos.  Tipping is not really expected, but with the recent increase in the price of gasoline in Mexico, I have tended to be generous with drivers.  I gave him 60 pesos... less than $3 US.