Of course no visit to Yucatán would be complete without seeing one of the Mayan ruins which dot the peninsula.  The most famous of the Mayan ruins is Chichén Itzá, but I always take my friends to the lesser known, but equally impressive ruins of Uxmal instead.  As I have written before, Chichén Itzá is overrun with tourists and souvenir vendors, and visitors are not allowed to climb any of the ruins.  The other day I was talking with a visitor from Australia, and she confirmed what I have always said.  She had visited both Chichén Itzá and Uxmal, and she felt that Uxmal was a much more satisfying experience.

We were scheduled to leave on our excursion at 9:00 AM.  I had arranged for David Estrella , the owner of a travel agency here in Mérida, to be our driver.  I employed his services last year when I was in Mérida.  He is extremely reliable, extremely punctual, and an all-around nice guy.  I could not ask for a better person to take us on an excursion.

David arrived a few minutes early while we were finishing our breakfast at the restaurant across the street from the hotel.  I went out to greet him, and we gave each other an "abrazo".  (I continue to amaze Gail and Wes with the number of people I know here.)

The weather today was very different from the past three days.  A "norte" (a cold front from the north) is blowing through.  The temperature was much cooler with a high in the 70s, and the skies were overcast.  We even had a bit of drizzle while we were at the ruins.  It was actually a blessing.  If the sun had been blazing and the temperature had been in the 90s, visiting the ruins would have been an exhausting ordeal.

This was the part of the trip that Wes had been looking forward to the most.  Climbing a pyramid had been on his bucket list, and, as a retired engineer, he found the Mayas' skill in construction to be fascinating.  Uxmal lived up to, and even exceeded, their expectations, and they were not expecting such a large archaeological site.

Upon entering the site, one is greeted by the impressive Pyramid of the Magician.  Climbing this pyramid is prohibited, probably because of the extreme steepness of the steps.  Many years ago, however, climbing was allowed.  Back in the 1980s I went to the top with a group of my students.

.
We past through a corbel arch into the quadrangle which the Spanish called the Nunnery. 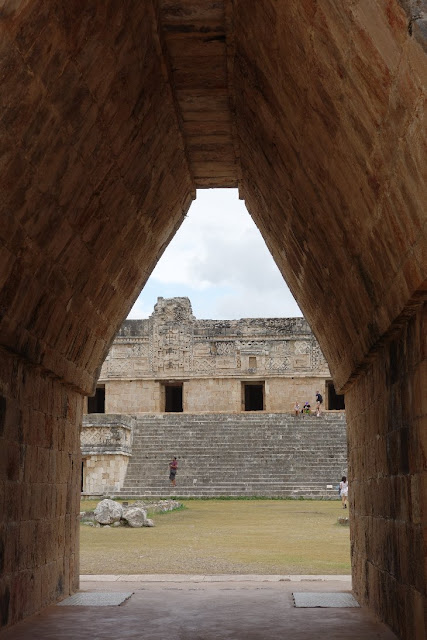 The Nunnery received its name because its four buildings facing a central courtyard reminded the Spaniards of the cloister of a convent.  We don't know the exact purpose of these buildings, but they certainly were not a nunnery.

The architecture of Uxmal is noted for the elaborate decorations along the upper portions of the buildings.  These are made from thousands of pieces of stone fitted together and placed in concrete. 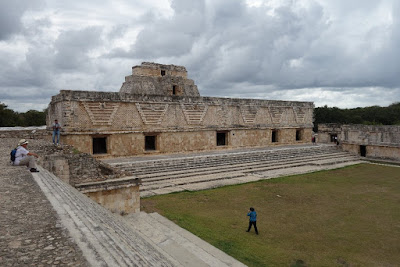 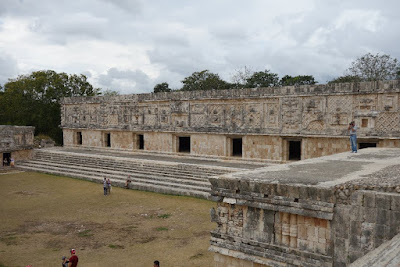 Built on a platform overlooking the city, the Governor's Palace is the longest, and one of the most impressive buildings of pre-Hispanic Mexico.  Again, the upper portion is intricately adorned with Mayan motifs.  However, as my cousin noted, the overall design of the structure comes across as surprisingly modern. 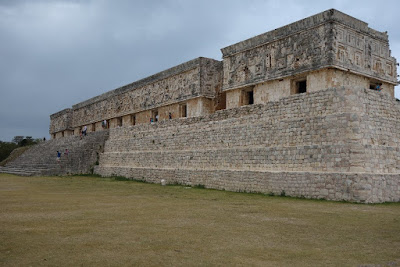 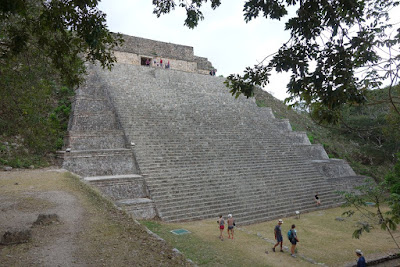 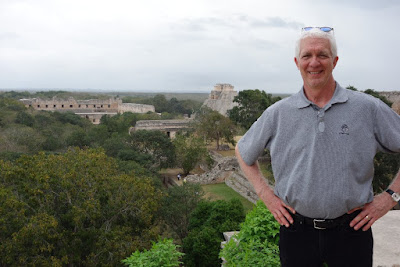