Today my cousin Gail, her husband Wes, and I traveled to Mérida, Yucatán.  Our flight from Cleveland to Houston went smoothly.  However our flight from Houston to Mérida was going to be delayed due to a problem with the hydraulic system.  Fortunately, they switched us to a different plane at a different gate,.  We arrived at least an hour late in Mérida... but it could have been much worse. 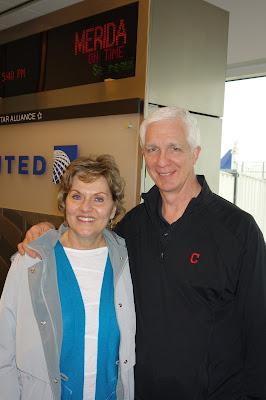 We took a taxi to our hotel, Luz en Yucatán.  Gail and Wes were very pleased with the place.  After we got settled, we headed out to a sidewalk café for a drink and a snack.  We ordered some "quesadillas".  Gail had lemonade.  Wes had a "Montejo" (the local brand of beer), and really liked it.  I had my usual "Xtabentún" (a honey liqueur made in the Yucatán).  While Ohio is shivering, we were seated outside enjoying the good life, a tropical night in Mérida. 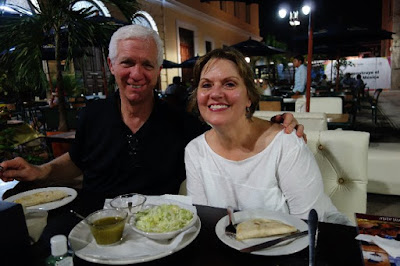