My cousin Gail said, "It's like Jurassic Park!" when we visited a "cenote" yesterday.

So, what is a "cenote"?  The Yucatan Peninsula is a flat shelf of limestone.  In countless places across the peninsula, the limestone has collapsed forming natural sinkholes.  There are no rivers in Yucatán... at least not on the surface.  There is an extensive subterranean river system, and the "cenotes"  gave the Mayas access to that hidden water supply.

Some years ago, when I was showing a family member around the Yucatán, our driver took us to a rather isolated but beautiful "cenote" called X'tabún.  Ever since then, whenever I take a friend to the Mayan ruins of Uxmal, I have the driver make a detour to visit Cenote X'tabún.  We turn off the main highway between Mérida and Uxmal, and travel several miles along a narrow paved road.  We reach a village by the name of San Antonio Mulix.  The little town owns a couple "cenotes" which they maintain as an eco-tourism spot, although it is very far off the typical tourist path.

After our visit to Uxmal, and dinner at an old hacienda, our driver, David, took us to San Antonio Mulix.  There we stopped to pay our admission fee and sign the visitors' registry.  We were, not surprisingly, the only "gringos" to visit the place that day.  We then drove to a dirt road where a villager took our tickets and opened the gate.  We traveled along the dirt road until we came to a spot above the "cenote" where we could park the car.  We took a short path leading down into the "cenote" to the water level.  There was a Mexican family there on a Saturday afternoon outing.  They had been swimming, but were preparing to leave.  We soon had this tranquil, beautiful spot all to ourselves.

The water is crystal clear and filled with small fish.  Where the "cenote" is deeper ...the depth of many of them is unknown...  the water is a dark midnight blue.  The limestone cliff rises up from the water, and the roots of the trees growing above hang down like vines. 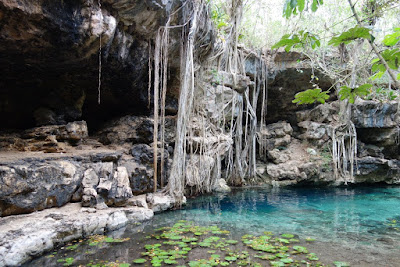 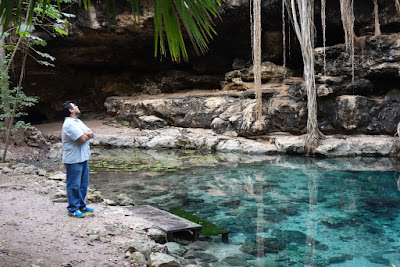 Our driver, David, contemplates the beauty of the "cenote". 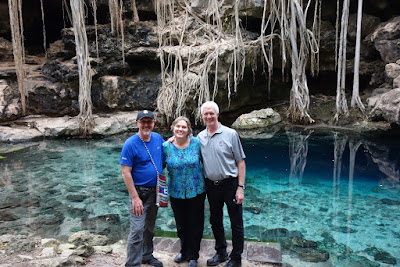 Gail and Wes loved this spot.  Wes said that visiting a "cenote" should have been on his bucket list.  Perhaps he can add "swimming in a cenote" to his list, and thus have an excuse to make a return visit to the Yucatán.
Posted by Retired Teacher at 4:54:00 PM