History through the Eyes of Painters

In the late 1800s it became the fashion for Mexican artists to create paintings depicting the nation's early history... legends from the pre-Hispanic era and stories of the Spanish conquest.

Here are a few of those sometimes fanciful paintings that hang in the National Museum of Art. 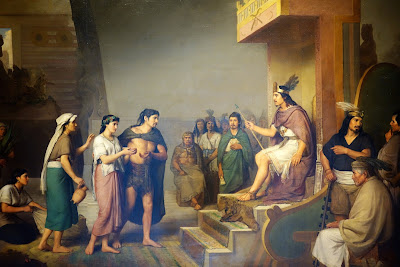 "The Discovery of Pulque" by José María Obregón 1869

One legend says that the goddess Mayáhuel taught the young princess Xóchitl how to make the alcoholic beverage pulque.  The princess was in love with a commoner, but her father disapproved.  When she presented the pulque as a gift to her father, the king relented and allowed the marriage of his daughter. 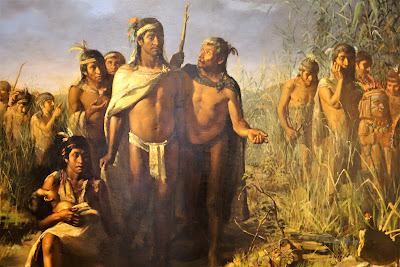 "The Foundation of Mexico City" by José María Jara 1889

According to Aztec legend, their god Huitzilopochtli led the tribe to a swampy island in the middle of Lake Texcoco where they founded their capital of Tenochtitlán, later the site of Mexico City. 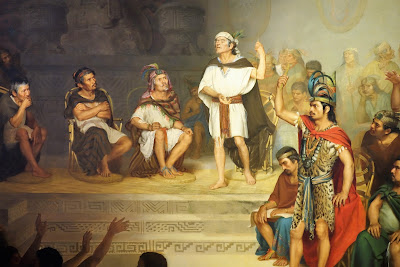 "The Senate of Tlaxcala" by Rodrigo Gutiérrez 1875

The tribe known as the Tlaxcaltecas were bitter enemies of the Aztecs.  When the Spanish arrived in Mexico the Tlaxcalteca chieftains debated as to whether or not they should ally themselves with the Spanish against the Aztecs.  They voted to side with the Spanish, but the young prince Xicoténcatl argued vehemently against the alliance.  In the 19th century he became a symbol of resistance against foreign intervention. 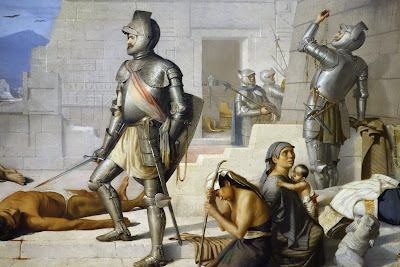 "Scenes from the Conquest" by Félix Parra 1877 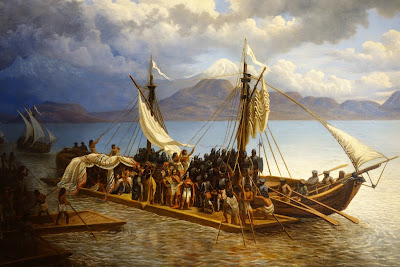 "The Capture of Cuauhtémoc on Lake Texcoco" by Luis Coto 1881

Cuauhtémoc, the last Aztec emperor, attempted to escape the Spanish siege of Tenochtitlán and continue the resistance against the invaders.  However, his canoe was captured by the Spanish on Lake Texcoco, marking the definitive defeat of the Aztecs. 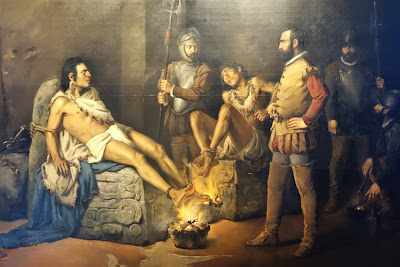 "The Torture of Cuauhtémoc" by Leandro Izaguirre 1893

The last Aztec emperor, Cuauhtémoc and his cousin were taken prisoners by the Spanish.  The conquerors tortured the two Aztec nobles hoping that they would reveal the location of hidden treasure.  As their feet were placed over flaming braziers, the cousin cried out in pain, while Cuauhtémoc stoically said, "Do you think that I am in a bed of roses?"
This painting was displayed at the Columbian Exposition of 1894 in Chicago and was awarded a gold medal.
Posted by Retired Teacher at 8:42:00 AM