On Tuesday, Cliff and Jeramie's last day in Mexico City, we went to the National Museum of Anthropology.  We took the Metrobus to the Paseo de la Reforma, the city's monument-studded, tree-lined boulevard.  There were transferred onto one of the new double-decker buses that travel along the Paseo.  The bus was not crowded, and we had front row seats on the upper level, giving us a great view of the boulevard.  We got off at the stop right in front of the museum. 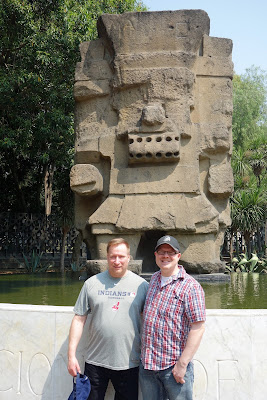 Cliff and Jeramie in front of the enormous monolith of Tlaloc, the rain god, which stands near the entrance to the museum.

As we were approaching the museum, I could hear the sound of flute and drum.  I knew that the ritual of the "voladores" (flyers) was beginning.  We hurried over to the area near the museum where a 90 foot pole stands.  Four of the "voladores" had just hurled themselves from the pole, while the fifth participant remains on top of the pole playing the drum and flute.  The flyers descend, revolving around the pole, as the rope connecting them unfurls. 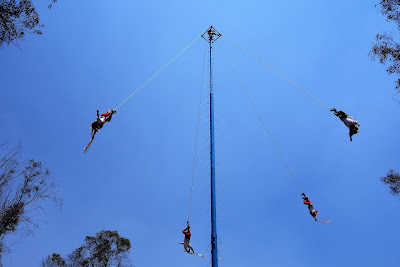 After viewing the ritual, we entered the museum.  As I mentioned in an earlier post, since the museum is so large, I was just going to give them a highlights tour.  We saw artefacts from four of Mexico's pre-Hispanic civilizations, ending with the centerpiece of the museum, the "Mexica" (or Aztec) Hall. 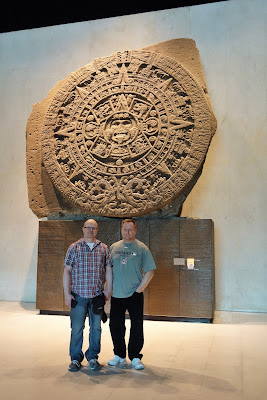 In front of the Aztec Sun Stone


After about three hours "museum fatigue" was starting to set in, and we decided to return to the hotel.  However, they had an overview of one of the great museums of the world.
Posted by Retired Teacher at 9:14:00 PM