In my last post I wrote that I was going to fill in the open area in front of my house with azaleas.  At that point I had planted one bush, a pink "rosebud" azalea.  Since then I have planted three more... one with red blossoms, one purple, and finally another "rosebud". 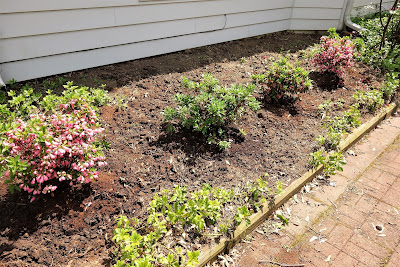 All four of the azaleas were rather difficult to plant since the soil was thick with the roots of the overgrown shrubs that had been removed from the area.  Planting the final "rosebud" was especially difficult.  The area was on top of the site where a very large bush, as tall as the house, had stood.  I could not cut the roots with the shovel, and I had to attack them with a pickaxe.  It probably took me an hour to prepare a hole large enough for planting the azalea.